MLS got everything they ever wanted in New York City FC. Now they have to hope that what they wanted was right.

Share All sharing options for: New York City FC is everything Major League Soccer has ever wanted

The bright lights, big money and glamor of New York has always tantalized MLS. The city was the heart of its plans to bring soccer to the masses, but for 18 years it and everything that MLS has craved has teased the league, remaining just out of its reach.

Today, with New York City FC, the league is betting that it has finally lured its mistress -- The Big Apple.

New York presents opportunities for MLS that no other city does, from the more than 8,000,000 people in the five boroughs alone to the country's number one media market to the unmatched financial power that sits on the small island at the mouth of the Hudson River. But what New York really does is bring it all together under one bright spotlight. 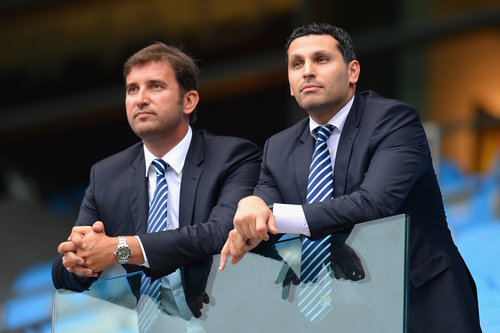 Major League Soccer got the deep-pocketed owners they wanted for Team No. 20.

MLS has struggled to capture that spotlight since its inception in 1996. The New York/New Jersey Metrostars were a ham-handed attempt to embrace the entire metro area -- albeit an amusing one and now endearing reminder of MLS's infancy. Everything from the name, to the empty seats at Giants Stadium was comical, and most of all, the club's ineptitude on the pitch made them the butt of jokes around the league. New ownership, a new name and a move to gorgeous Red Bull Arena didn't help either, as the club became property of New Jersey while New York remained blissfully ignorant of the MLS team carrying its name.

The league put its offices in New York and held events there, but without a team that resonated within the city limits, MLS would continue to be an afterthought to the millions of people and dollars that populate the city. And so began the quest for NYC2.

As MLS expanded, from 10 teams in 2004 to 19 in 2012, this mythical second team in New York followed the league everywhere it went. Dubbed NYC2, this expansion team would bring MLS to New York for first time, not just with a stadium inside the city limits, but with a team that would capture the hearts and imaginations of The Big Apple.

The creation of Real Salt Lake and Chivas USA in 2005 marked MLS's first expansion since 1998 and set in motion the league's new era of growth. The league went into Canada not long after and expansion in Cascadia brought the MLS its first great rivalry. With the league's expansion came new TV deals, unprecedented growth and optimism. But through it all, MLS insisted the next great step was always going to be New York.

But bringing MLS to New York wasn't as easy as handing the city a team. It required an owner, and a deep pocketed one at that, with the cash to pay the $100 million expansion fee that the league slapped on the team as well as managing it like the mega-club MLS envisioned for NYC2. It required a stadium, one in the five boroughs that could wow its citizens and a worldwide audience the way the club is supposed to. It required knowledge of the city, and exactly how to tap into its many resources so it wouldn't be New York in name only.

The league was all-in on New York. The Southeast remains without a MLS team, but it was never prioritized like New York. The New England Revolution and D.C. United desperately need new stadiums, but the league never took the lead in developing one in those cities like they did in New York. Shortcomings elsewhere on the continent be damned, New York was getting its team and it was getting it the way MLS wanted it.

For years, rumored swirled about NYC2. Where would the stadium be? Who would own the team? What would happen to the Red Bulls?

The answers were clear: In New York, whoever had money and know how, and 'who cares?'

Sheikh Mansour, the owner of Manchester City, is estimated to be worth $30 billion and his club has all the knowledge of the sport one could ask for, even if the oddities of the league create somewhat of a learning curve. The Yankees' corporate contacts in the city are unmatched and they just finished developing, building and operating a stadium in the city. The stadium remains a work in progress, and the team will begin play in 2015 in a temporary home, but MLS has already made headway on a Queens stadium and it's unthinkable that with the money, drive and experience in the ownership group that the team will be homeless for long.

Questions about New York City FC remain, from when the stadium gets done to whether association with Manchester City and the Yankees may turn off Manchester United fans and every non-pinstriped baseball fan. But those concerns are on the same level as an expansion team in the Southeast or D.C. United's stadium -- much lower on the totem pole than New York, money and the spotlight.