For the fifth time in their history, Bayern Munich are the champions of Europe. Jupp Heynckes goes out in style, leaving the Bavarian side after guiding them to a 2-1 win over Borussia Dortmund in the Champions League final.

Bayern Munich are the European Champions, thank to a brilliant late flurry and an 89th-minute winner by Arjen Robben. Borussia Dortmund gave the Bavarians more trouble than most anticipated, but didn't have enough to overcome their Bundesliga rivals as Bayern won, 2-1, to lift the Champions League trophy.

Jürgen Klopp opted to stick with his regular formation, even in the absence of Mario Götze, by playing Kevin Großkreutz on the wing and moving Marco Reus inside. There were some rumblings that Sebastian Kehl might start, moving Ilkay Gündogan up the pitch, but Klopp opted for the alternative. Jupp Heynckes' team contained no surprises, though Bastian Schweinsteiger picked up a pre-game knock. Bayern's star midfielder was still able to start.

Dortmund were surprisingly the much more assertive team in the early going, though they failed to turn their chances into a first-half goal. Robert Lewandowski, in particular, was extremely active and consistently terrorized the Bayern center of defense.

Lewandowski had the game's first shot on target in the third minute, and went close with a rocket just wide in the 13th minute. Der BVB kept the pressure on, and just one minute after that effort by Lewandowski, Manuel Neuer was called into action and made an excellent reaction save at the near post on a low shot by Jakub Blaszczykowski.

Bayern were kept on their heels until the 25th minute. Reus had a long-range effort saved by Neuer in the 19th minute after he was slipped in on goal by Großkreutz. Sven Bender also had an effort from 12 yards saved by Neuer, though he should have done quite a bit better to elude the Bayern keeper.

Click here for full coverage of the Champions League final 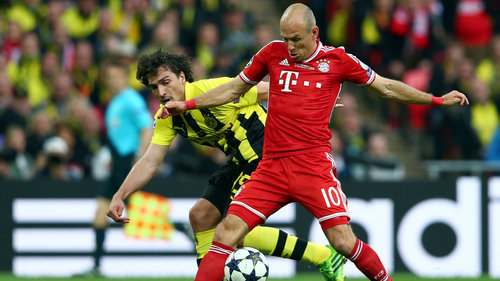 In the 25th minute, referee Nicola Rizzoli failed to spot an elbow by Franck Ribery to the face of Lewandowski and, in fact, gave a free kick the other way. Coincidentally, that seemed to be a bit of a turning point in the first half. Dortmund didn't go away after that, but Bayern came into the game and looked the slightly better side until the end of the period.

Just a minute after the elbow, Roman Weidenfeller was forced into a massive save on Mario Mandžukić. Ribery whipped in a beautiful cross towards the back post that the Croatian international met with his head, and Weidenfeller just barely got a finger to the ball to tip it onto the bar and out for a corner.

Weidenfeller was forced into a similarly brilliant save in the 30th minute, though Robben probably should have scored. The Bayern winger was left all alone on the right flank after a through ball from Thomas Müller and had a ton of time and space to dribble in on goal and manufacture a shot. However, he dwelled on the ball too long and Weidenfeller made a brilliant decision to rush out, then block Robben's late attempt.

Not wanting to be outdone, Neuer produced another excellent save of his own five minutes later, executing an impressive kick save from close range on Lewandowski after he was slipped into the box. He was played in by Reus and beat Jerome Boateng -- who looked slow throughout the half after picking up a knock -- easily for pace. It looked like Boateng might need to be relieved by a substitution, but he came out to start the second half.

Boateng didn't look much better in the second half, but it didn't matter much for Bayern in the early going. Dortmund didn't attack with the same pace as they did early on, Bayern took control, and eventually they found a goal.

In the 60th minute, Bayern Munich took the lead with a fantastic move down the left flank. Robben and Ribery overloaded the same side of the pitch, and Dortmund had no answer. Ribery picked out Robben in the box, beating two defenders with his pass, and Robben slid a ball across the face of goal. No one tracked the run of Mandžukić, who was free to tap in the finish to put his team ahead, 1-0.

Bayern stayed on top, but gave Dortmund a free route back into the game in the 67th minute, thanks to a terrible foul in the box by Dante. He let the ball bounce in the box when he could have cleared earlier, then put his leg up high and into the stomach of Reus. Rizzoli correctly pointed to the spot, but refused to send off Dante, who was already on a yellow. Gündogan stepped up and buried the penalty to level the score.

At least temporarily, the Bavarians seemed to lose their composure. Not long after the spot kick was converted, Bayern gave the ball away in midfield and left a ton of space for Dortmund to counter into. Blaszczykowski took off on a run down the right flank and cut the ball back for Hummels, who had an open shot from 20 yards, but smoked it over the bar.

Neven Subotic pulled off the play of the game in the 72nd minute, saving a certain goal with a spectacular clearance off the line. Dortmund had multiple chances to shut down a dangerous Bayern counter, but let Müller get free down the right and square a ball for Robben that looked to set up an easy tap-in finish. Incredibly, Subotic got across, positioned himself in front of Robben and cleared away.

Rizzoli failed to spot a controversial play in the 79th minute, when Boateng and Lewandowski collided, complete with some extracurricular activities off the ball. Their collision seemed innocent enough and didn't necessarily constitute a foul, but Lewandowski clearly stepped on the ankle of Boateng with his studs after he had fallen to the ground. Surprisingly, though he was hobbled well before the incident, Boateng continued.

Things appeared to be settling down in anticipation of extra time, but Bayern turned on the style late and found an eventual winner. Weidenfeller made a spectacular save in the 87th minute on a shot from Schweinsteiger, but he only delayed Dortmund's eventual heartbreak. An even better move was Der BVB's undoing in the 89th minute, with Robben scoring the game-winning goal.

Ribery set up the goal by backing down his defender and receiving a ball off his chest, then playing behind with a backheel. His pass wasn't perfect, but Robben blew by his defender and won the race to the ball. He took one touch to round Hummels, a second to set up a shot, then a third to tap the ball to the left of a helpless Weidenfeller, who could do nothing as the ball rolled into the back of the net.

After two failures in the Champions League final in the last three years, Bayern Munich are champions of Europe for the first time since 2001.

• AS Monaco make it rain