A makeshift, reshuffled Italy have an unenviable tie against Spain on Thursday, as both sides vie over a place in the Confederations Cup final.

There have been no surprises in Spain's Confederations Cup campaign so far, with Vicente Del Bosque's side looking comfortable throughout all of their group games and picking up three wins from three. La Roja are expected to beat an inconsistent Italy -- the side they blitzed 4-0 in last year's Euro 2012 final -- and progress to the final.

The Confederations Cup trophy is a rare piece of silverware yet to grace Spain's cabinet, though they remain the best international team around right now. With Cesare Prandelli's Italy leaking goals and struggling for consistency, it's extremely difficult to see them repeating the United States' heroics of 2009; knocking Spain out at the semifinal stage of this competition.

After a convincing opening group stage win over Mexico, Italy came from two goals behind in a spectacular -- if pretty ragged -- fashion to win 4-3 against Japan, before leaking four goals themselves in a 4-2 defeat to tournament hosts Brazil. Defending has been the Azzurri's major issue so far, with rumors suggesting it could lead to yet another formation change for this semifinal.

Vicente Del Bosque has preferred Roberto Soldado over Fernando Torres as Spain's main central striker so far, despite the latter being the competition's top scorer (though he admittedly filled his boots with four goals against Tahiti). However, Soldado was brought off with muscle discomfort in Spain's 3-0 win over Nigeria, meaning he may not be fit to start. Cesc Fàbregas also has a muscle problem, and could miss out.

Italy have received a huge blow in the news that striker Mario Balotelli isn't fit to play, with a thigh injury rendering him unavailable. Balo has been one of the stars of the Azzurri's tournament so far, with probable replacement Alberto Gilardino an unconvincing stand-in. Midfielder Riccardo Montolivo is a slight doubt with a concussion.

It's also worth noting that Italy could revert back to the 3-5-2 which held Spain to a 1-1 draw in the group stages of last year's Euro 2012, with Juventus' centre-backs struggling to adapt to a back four in the 4-3-2-1 and 4-2-3-1 which Prandelli has experimented with so far this tournament. 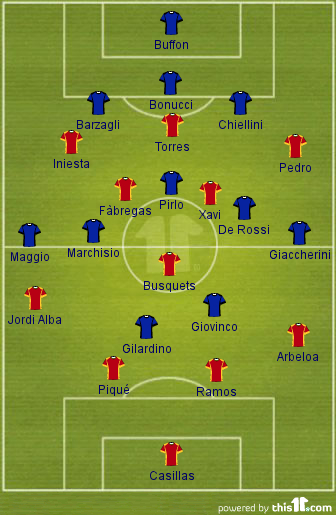 Spain's left-back Jordi Alba has been one of their star performers again this tournament, with his impressive forward runs causing problems. If up against a direct wing-back opponent (likely Christian Maggio), he'll have to be tracked really well. But, his forward runs could also be used offensively by Italy. If a second striker like Sebastian Giovinco can exploit the space vacated in the Spanish left-back area, Italy could find some success.

With his clever diagonal runs, Spain's winger Pedro offers a more penetrative, direct threat than most of their other players. Probably up against a makeshift wing-back in utility player Emanuele Giaccherini, he could really help keep Italy penned back deep in their own half, dancing around joyously in any space that Giaccherini leaves in behind.

The importance of Andrea Pirlo to Italy is obvious to the point that it's really quite concerning. His distribution from deep in midfield will be important in setting up quick counter-attacks, though it's unlikely he'll be given any room at all in which to work -- particularly with Spain's insistence on pressing their opponents into submission. If he's shut down effectively, Italy's task will be a considerably harder one.

Suggesting Gianluigi Buffon is too old after a couple of dodgy performances is admittedly premature, though he's certainly not been at his best at this tournament. With Italy likely to face a barrage of attacks, Italy need their talismanic shot-stopper at his best.

Italy have struggled defensively, and not even a switch to a back-three should contain Spain. If anything, it could allow them to tighten their grip over possession even more. Combine the Azzurri's defensive woes with a makeshift strikeforce, and the best team in the world should have little problem in extending their unbeaten competitive run -- which now is over three years long. 3-0 Spain.

• Caleb Porter is better than advertised