Third place games with extra time are a bit ridiculous, but hey, this was a fun undercard! Italy made up for their shootout loss to Spain by besting Uruguay on penalties.

Italy won't be satisfied with third place in the Confederations Cup, but they're looking good heading into the World Cup following their semifinal draw with Spain, which they lost on penalties, and their win over Uruguay in penalties in the third place game. Gianluigi Buffon came up with three big saves to guide Italy to the win after a 2-2 draw.

It wasn't clear whether or not this game would be wide-open and entertaining like most third place games until around the third minute, when Giorgio Chiellini just missed on a header in the 9th minute. Things opened up considerably after that and Italy eventually netted the opening goal in the 24th minute. Fernando Muslera basically handed it to them by flapping at a Alessandro Diamanti free kick and missing before it struck the post, then his back. It bounced to Davide Astori in front of an open net, and the defender scored the easiest goal of his life. 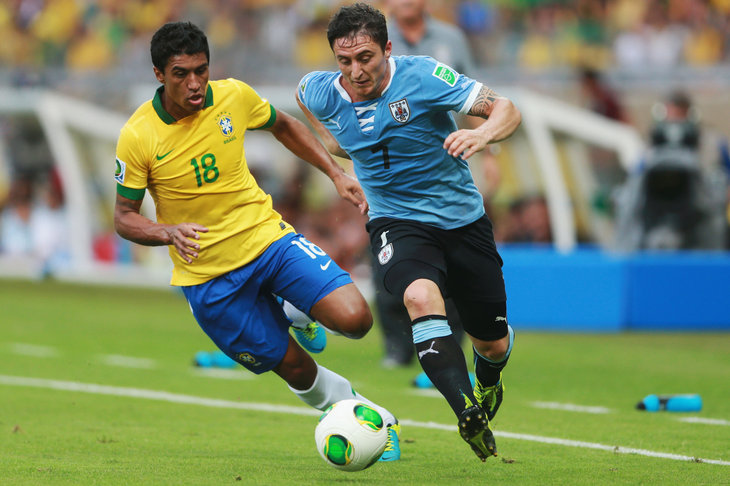 Bookmark our Road to Brazil hub for all of our international football coverage, from qualifying and the Confederations Cup all the way until the 2014 World Cup.

The first half stayed entertaining, though there were no more goals. Edinson Cavani looked to have an equalizer in the 32nd minute, but was called for offside.

Eventually, Cavani would get his goal, pulling Uruguay level in the 58th minute. Walter Gargano set up the chance with a great run through the middle and a through ball into the box. His pass looked to be intended for Luis Suarez, who was making a diagonal run to the near post, but Cavani was in a better position to pick up the pass. He calmly placed a perfect finish to the far post, tying the match at 1-1.

Extra time was forced by a spectacular exchange of direct free kick goals. Diamanti scored a stunner in the 72nd minute from 20 yards out to put Italy ahead and Cavani matched him just six minutes later with a shot that was nearly a carbon copy. However, Diamanti's was a bit sharper, and Buffon probably could have done more to stop Cavani's effort.

The extra period was mostly uneventful, save for the questionable sending off of Riccardo Montolivo in the 110th minute. He didn't appear to make any contact with Luis Suarez when he was whistled for a foul, and was amazingly shown his second yellow card. Uruguay were the better team for the remaining 10 minutes of extra time while playing a man up, but Italy comfortably held their own to force penalties.

Diego Forlan got things off on the wrong foot for his team, hitting a less than impressive shot down the middle that Buffon was able to kick away. Fernando Muslera gave his team hope when he saved a penalty by Mattia De Sciglio at 2-2 in the shootout, but Martin Caceres missed the next spot kick. After Emanuele Giaccherini hit the next penalty to put the pressure on, Gargano had a weak attempt easily saved to give Italy the 3-2 win on penalties.