It's a clash of CONMEBOL qualification titans in Buenos Aires on Friday, with Argentina and Colombia meeting in a game which promises much fun.

With Brazil hosting next year's World Cup, Argentina are the only real giant who've been left in the South American qualification group -- possibly with the exception of an underperforming Uruguay. It's therefore unsurprising that La Albiceleste have stormed to the top of the table and look set to guarantee their qualification soon.

However, a thoroughly lovable Colombia side will look to throw a shiny spanner in the Argentinian works this Friday, in another manifestation of their late, brilliant footballing resurgence. Blessed with some incredible talent, coach José Pekerman has blended a team which has shot toward its first World Cup this decade, having heaps of fun along the way. Having said that, it's probably not actually possible for a team boasting Radamel Falcao, James Rodríguez, Juan Cuadrado and countless others to ever be boring.

They have lost only twice since the start of 2012 and head to Buenos Aires to face their sternest test in qualification yet. Shockingly losing at the hands of Venezuela in their last game, they maintain a four-point buffer inside the automatic qualification places, though aren't quite home and dry yet. Contrastingly, Argentina are four points clear at the top of the table, and can probably start booking their Brazilian hotels already.

All eyes are on Lionel Messi, who's included in the squad despite a recent hamstring injury. He's been training and is expected to be available, though if he's declared unfit then Walter Montillo or Erik Lamela is expected to come into the starting 11. Elsewhere, Fernando Gago is out injured, with Anderlecht's Lucas Biglia starting instead. Colombia coach José Pekerman has the luxury of having a full-strength team available. 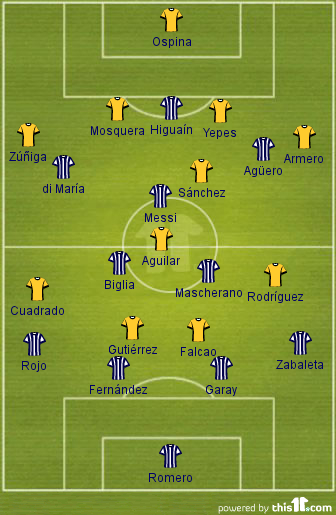 Fiorentina's versatile right-sided star Juan Cuadrado has been quite possibly the best player to watch in Serie A this season, skipping past opponents with his boundless energy, usually before drilling a lethal cross into the box. He's repeated his form at international level with Colombia, and starting high up the pitch against Marcos Rojo on Friday will be a key attacking outlet. Keeping him quiet will be top priority for the Sporting Lisbon left-back.

Monaco's new €60 million man Radamel Falcao is obviously one of the best pure strikers in the world right now, and has scored 52 goals over the last couple of seasons at Atlético Madrid in La Liga. A brilliant all-round threat, his six goals in qualification make him Colombia's top scorer -- and the man that Argentina coach Alejandro Sabella will be most anxious to keep quiet.

Such is the offensive emphasis in the Colombia side, it's likely that Carlos Sánchez will be their only defensively-minded midfielder in their starting 11. Should Lionel Messi play, his job will be even more difficult. However, Sánchez has already marked the world's best player perfectly before, neutralising him in a goalless game at the 2011 Copa América. Colombia need to hope the man nicknamed La Roca -- "The Rock" -- does the same again.

Suffice to say, any coach who picks both Juan Zúñiga and Pablo Armero as a full-back pairing is pretty brave. And should be given a prize. Both are attack-minded and have operated in freer wing-back positions at Napoli this season, though they'll be given duties either side of a back four here. They're extremely athletic, so covering a lot of ground isn't too much of an issue, though if Ángel di María and Sergio Agüero can find some space in behind, Argentina could find some joy.

Undoubtedly the best team in the qualification group, Argentina are favourites to win -- despite Colombia's recent good run of form. Both sides have brilliant quality in attack and sturdy defences, though Argentina have been excellent at home recently, perhaps just giving them the edge. 2-1 Argentina.

• USMNT flawed, but on the right track