While Wednesday's Spanish Super Cup first leg was a positive result for Barcelona, the overlying performance was riddled with the same issues that haunted the club last season.

Before the season ends Gerardo Martino may very well find the right adjustments to ensure that Barcelona have another multi-trophy year and reclaim their place as the best team in the world.

The Blaugrana's season opening win over Levante got many excited about Tata's changes and an apparent resurgence of Barca's lethal attacking. The only problem, of course, is that there was an element of smoke and mirrors to that game because the Granotes were truly poor.

On Wednesday in the Spanish Super Cup first leg against Atletico Madrid, we saw something closer to the real Barcelona -- a team still struggling with poor defending and an offensive system that can be bottled up by an aggressive and organized defense.

If you thought that Martino's arrival would magically change the fundamental problems that we saw throughout last season, you were likely disappointed.

Despite the positive result -- a 1-1 draw -- thanks to a second-half equalizer from Neymar, Barca spent much of the game being frustrated in the final third and trying not to get burned by Diego Simeone's well crafted game plan.

Atletico's goal, which came in the 12th minute thanks to a brilliantly executed counter attack and an even more impressive finish by David Villa, was the exact same type of breakdown we saw throughout last spring. With Dani Alves and Jordi Alba playing their usual pressing game on the wings, the responsibility of guarding against breaks fell to Gerard Piqué and Javier Mascherno. For the most part they did the job, but there were several close calls in addition to David Villa's goal.

So Wednesday night's performance was better in places, but it wasn't good enough. At least not by Barca's standards.

Barca's system hinges on the necessity of keeping possession of the ball, defending through attacking. This isn't a new concept but with the injury problems to Carles Puyol and no capable replacement yet found, the system doesn't work against top teams capable of countering effectively and playing an organized defense. 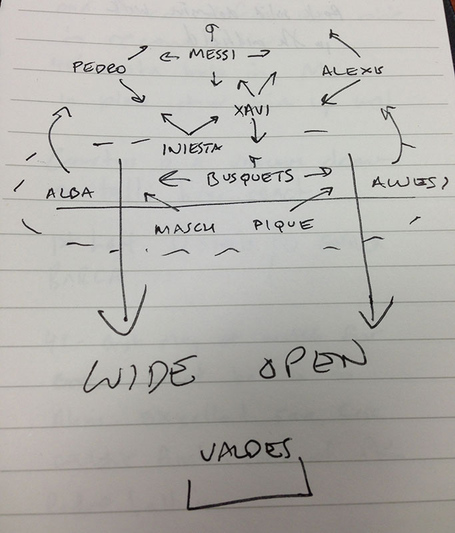 When Ateltico scored they gave every team in the world another textbook example of how to properly defuse Barca's attack and then break them down.

Step 1: Pressure the ball, force Barcelona into a turnover or a bad pass. Intercept the ball and push it forward to a striker or attacker capable of holding the ball up.

Step 2: As the ball is moved forward to be held up, have your other attacking players immediately begin runs into gaps between Barca's two central defenders who will be focused on the ball and trying to take back possession.

Step 3. Hold-up player reads the attacking player's runs and sends a pass to begin the counter attack before following the play and looking for a gap to exploit.

Step 4: Create a shot on goal. 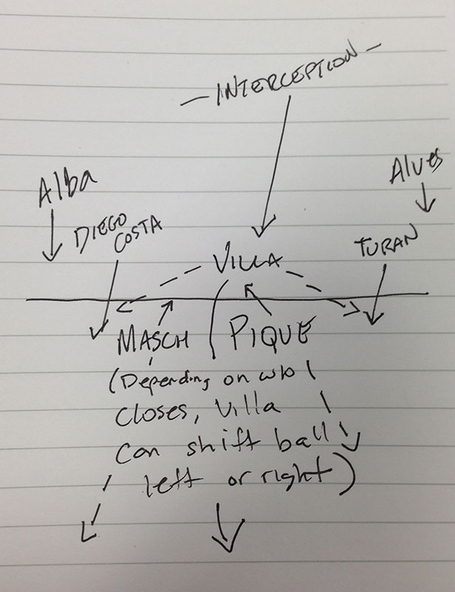 The problem is -- and the positive for Barcelona -- that few teams are properly equipped to take full advantage of this game plan. This allows Barca to remain extremely effective, but ultimately susceptible to being broken down over and over again by the best teams they play. Even if a lesser team manages to pull off a counter attack goal, they rarely can hold up defensively over 90 minutes and withstand Barca's relentless attack.

If Bayern Munich were on the field last night instead of Atletico, it probably would have looked much the same as last season's Champions League white washing.

It's very early in Martino's reign as Barcelona's new manager but the issues remain. His insistence they don't need a new central defender is laughable and the idea that a total commitment to the high pressure possession attack is a good plan is ridiculous. This Barca team can't get away with the hyper-aggressive attack anymore against the teams they'll need to beat to win the Champions League. They'll probably still be find in La Liga and the Copa del Rey, but things are still very much broken.

Martino's greatest potential achievement at Barcelona could end up being the signing of a proper replacement for Puyol or forcing some shifts in the Blaugrana system to better compensate for their defensive weaknesses.

He deserves time to work with the team and put his stamp on the tactics and habits on his players. Immediate progress was not expected.

What Martino does now with the information he got on Wednesday and how his team adjust and plays over the coming weeks will prove whether or not he's capable of fixing Barca's issues.

• Will Tottenham have enough creativity when their deals are all done?

• Xabi Alonso has a broken metatarsal