Racing Santander fans applaud their players for refusing to play

Racing won't play until they are paid or the board is sacked, and on Thursday, they didn't play.

Share All sharing options for: Racing Santander fans applaud their players for refusing to play

The Racing Santander players claim that they have not been paid in months, so they are done playing.

When Thursday's Copa del Rey quarterfinal against Real Sociedad kicked off, the players walked to the edge of the center circle, where they stood arm in arm. The coaches and bench players also locked arms on the touchline.

Respectful of Racing's protest, La Real kicked the ball around for a little before kicking it out of play. When Racing refused to collect it and put it back in play, the referee suspended the match.

The players' protest was not out of the blue. They had threatened to do it unless the entire board was sacked, and when Thursday's match started, they made good on that threat.

The club's fans have sided with the players, too. After the referee called the match off, the players circled the pitch applauding the fans, who responded by standing and clapping for the players. 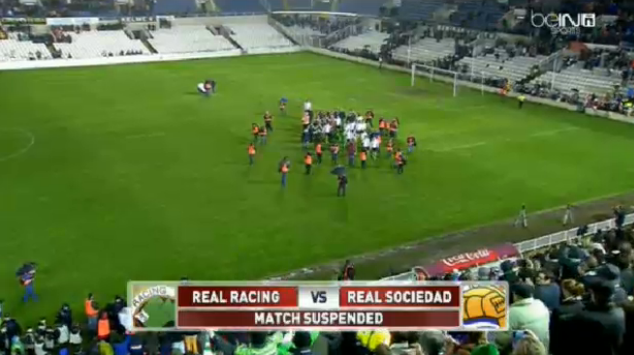 Real Sociedad will be awarded a 3-0 win for the match, putting them through to the semifinals, where they will meet Barcelona. For Racing's players, and the fans, this was about much more than a cup or a potential meeting with the Catalan giants.