Bruce Arena is so good that another MLS Cup would only add minimal padding to his already sterling resume.

What is the greatest dynasty in MLS history? Is it the early D.C. United teams, that dominated MLS in its formative years, or the current LA Galaxy, who have racked up more trophies than any other team in the toughest and most competitive era the league has ever seen?

The Galaxy can put that debate to rest Sunday by capturing another MLS Cup. But while it is fun to debate who is the greatest dynasty in league history, or to be a witness to that most incredible team, it's even more remarkable to watch the greatest American manager in action -- Bruce Arena.

no manager has been as much a part of the league's fabric.

Arena led D.C. in the league's first season, and captured the inaugural MLS Cup. Of the 13 coaches in that inaugural year, only one other coached in the league past 2001 and more than half don't manage anywhere anymore. In a league marked by turnover and change from the beginning, Arena made himself a pillar on Day 1.

D.C. also grabbed the U.S. Open Cup in 1996, making it a double, and the next year they got the MLS Cup and Supporters' Shield double. In 1998, he won the CONCACAF Champions Cup, bringing a continental trophy to MLS for the first time ever.

Those D.C. teams were amazing, dominant and unlike anything else in the league. While American soccer was still under British rule and anything other than a straightforward 4-4-2 dependent on direct and physical play was considered revolutionary, Arena's teams were nothing of the sort. They were daring and technical, creative and varied. They often had the league's best defense and were organized, but Arena showed that teams were capable of doing more than one thing, something most other clubs didn't even strive for, let alone succeed at.

By the time Arena joined the Galaxy in 2008, the league had changed. There were more teams and it was more competitive. He had a fat budget in LA, but also a broken team sitting at the bottom of the league. They had David Beckham and Landon Donovan, but little else. They were short on talent, short on cohesion and rudderless, having watching a highly touted foreigner in Ruud Gullit fail spectacularly as manager, only to be followed by a former MLS Cup winner in Frank Yallop struggle just as much. The club looked beyond repair.

Somehow, Arena did repair it, and he did it in just one year. By 2009, the Galaxy on top of the Western Conference and into MLS Cup. They lost, but the following year they won the Supporters' Shield. In 2011, they won the double, taking MLS Cup and the Supporters' Shield. Another MLS Cup followed and in the four years he took LA into the CONCACAF Champions League they made the knockout stages each time.

The league evolved from 1996 to 2008. It also evolved from 2008 to now. New coaches came in, as did new players and new investment. If the managerial churn from 1996, which Arena survived, looks gruesome, it wasn't all too different than it has been in recent years. More than 75 percent of the league's clubs have coaches who once played in the league and many are leading teams for the first time. They've brought tactical nuance to the league and a higher level of coaching despite their inexperience, while cleaning out an old guard that could not keep up with the new crop. 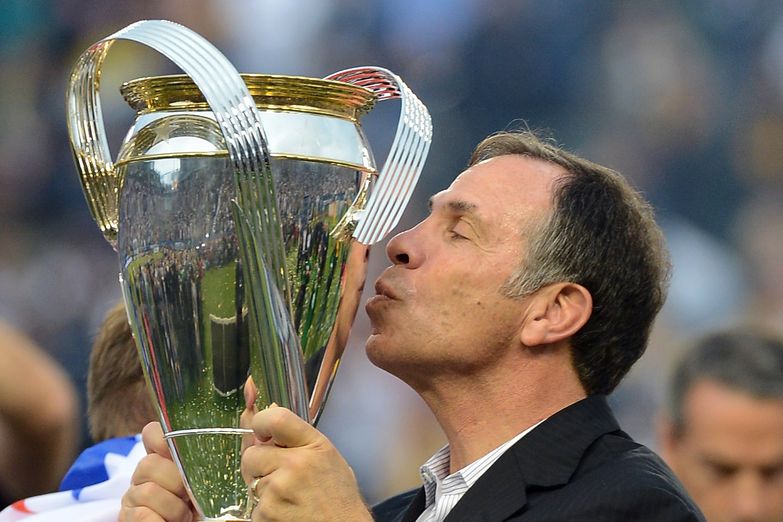 The 4-4-2 is alive and well, but not dominant, and physical teams that resort on Route 1 tactics are scorned. The league is more tactically varied and technical than ever before and it's led to dozens of managers ending up on the scrap heap, but not Arena.

Arena was tactically superior in 1996 and in 2008. That remains true to this day. He built teams around Marco Etcheverry with D.C. and then compensated for Beckham's many shortcomings to make his brilliance shine in LA. He moved Donovan around the attack and built league-leading defenses around Omar Gonzalez and A.J. DeLaGarza. He won titles with the incredible Robbie Keane up top, and did it even when he had to pair the Irishman with someone as poor as Adam Cristman in a final.

Arena does it with big names and stars, but also reclamation projects. He does it with the biggest payroll in the league, but doesn't miss a beat when other teams spend more.

Whoever stands on the other touchline, however much money they spend and whatever team he has, there is an aura around Arena. It is a well-earned one that affords him plenty of leeway and also casts immediate doubt on the man in the other dugout.

As good as the league's best and brightest are, they pale in comparison to Arena, who has cast aside hundreds of would-be challengers. Sigi Schmid hasn't been able to beat him and it remains a giant shadow over him, even while he makes a fair claim to the second-best manager MLS has ever seen. He can win the Supporters' Shield and U.S. Open Cup, as he did this season, and yet he is still questioned because he fell to Arena again. Dominic Kinnear hasn't fared any better, and while he will go down as one of the league's best coaches, he'll also do so with an 0-2 record against Arena in MLS Cups.

And while Arena stands atop MLS, either with a D.C. scarf or an LA scarf, he also looks down on the rest of American soccer with a United States scarf. The man who led MLS's greatest dynasty, and second-greatest dynasty, is also the best manager the national team has ever had.

Arena won the Gold Cup twice. He nurtured Landon Donovan and DaMarcus Beasley. He had the team playing more aggressively, attacking and cohesive than they have at any other time. And then, on top of it all, there was the run to the quarterfinals of the 2002 World Cup, where they beat Portugal, eliminated Mexico and even out-played Germany before bad luck and questionable refereeing sent them out. They played in various formations, changing drastically from match to match on the world's biggest stage and unleashing a level of tactical nous that left some of the world's best managers dumbfounded.

That chapter of Arena's career makes up the middle of his story and it is bookended by dynasties -- the two greatest dynasties in MLS history. They have combined to net him four MLS Cups, three Supporters' Shields, a U.S. Open Cup, a CONCACAF Champions Cup and two more unsuccessful trips to the league's title match. Now he's adding another showing in the final, and maybe another MLS Cup that will forever put to bed the debate about which club's run of success was greater. Finally, one of Arena's dynasties will be recognized as better than another Arena dynasty.

And however it shakes out, however many MLS Cups he wins and however incredible a resume he leaves behind him, Arena will respond with two things -- his trademark smirk and an arrogant quip reflective of a man who thinks he is better than anyone else who has stepped in front of him. And he is right.

No manager in the history of American soccer has done more than Arena. Not in MLS, not internationally. He is a class unto himself, so good that he hasn't been chasing history for years. He already is a part of history, and is now just figuring out what fonts, styles and paper his story will be told on before it is placed on the highest shelf in the annals of American soccer for everyone else to stare at and admire.