Nicolas Anelka has been banned for five games for his quenelle, a decision that once again highlights the inadequacies of English football's approach to discrimination.

A lot of things have happened since 28 December, when Nicolas Anelka ran into space behind the West Ham defence, tucked the ball home, peeled away in celebration and gestured his way into infamy. West Brom have found themselves a new manager, who has in turn found himself under pressure. Anelka has played four more games, and though he hasn't scored any more goals he has managed to see off one of his club's main sponsors.

More generally, the "quenelle" has been introduced to a British audience, as has its creator Dieudonne M'bala M'bala, and both have been debated by voices ranging from the well-informed to the entirely oblivious. Now, two months later, the FA's independent regulatory commission has concluded. Anelka will be banned for five games, fined £80,000 plus costs, and required to attend an education programme, whatever that is. He has seven days to appeal, and has finally been suspended by West Brom, in perhaps the world's first recorded instance of shutting the stable door after the estate agent has bolted.

Comparisons with other high-profile and similar incidents are perhaps inevitable, though since the FA rejigged its scale of punishments following John Terry's suspension for racially abusing Anton Ferdinand, direct comparisons of suspension length are tricky to make with any fairness. And without the panel's full reasoning on Anelka it's difficult to delve into too much depth. More interesting is the one conclusion we know all three decisions share, which is that the guilty party has done all the things we said they did, but at the same time definitely isn't racist or anti-Semitic. That they are, as the saying goes, not that sort of player.

In essence, the panel have determined that Anelka has made a gesture that is anti-Semitic, but did not do so in a manner intended to be anti-Semitic. As such he has been banned for the thing he did, but not banned in any greater measure because he did the thing without meaning the thing to convey the meaning that the thing would likely be taken to mean. Which is delicate reasoning at best; at worst, they've looked at an event where context is vital and stripped it of almost all context.

It is, perhaps, just about possible that Anelka could be good enough friends with somebody to want to dedicate a goal to them in their time of strife, yet not know him or his work in enough detail to understand that (a) even though he claims not to be anti-Semitic, that it is at least a subject of debate; that (b) despite his denials, much of his work looks to both the casual observer and the careful analyst to be flamingly and blatantly anti-Semitic; and (c) that this alleged/obvious and disputed/well-established anti-Semitism is the very basis of the strife in which said friends finds himself. Maybe. Perhaps. If you really, really try to simultaneously think the very best of Anelka's intentions and the very worst of his intelligence and self-awareness.

We wait and see whether there will be an appeal; we wait for sight of the details of Anelka's defence. Maybe there is a perfectly acceptable explanation. Until then, we can reflect on how similar this line of reasoning -- what, this offensive thing I did? Oh, don't be silly. I meant nothing by it -- is to that trotted out not only by every single bigot with the basic sense of self-preservation not to have a swastika tattooed on their forehead, but also a far wider spectrum of society, a great swathe of people that simply wouldn't dream of thinking of themselves as anything like those nasty racists you hear about.

Discrimination doesn't just travel in hurled insults and crude symbols; it is not simply about the overt and easily condemned. It lives and festers in the spaces between what can be understood and what can be proved to be understood. In the jokes, in the 'just sayings'; in the stereotypes and the cliches. In, for a current example, the coded nods and winks that accompanied a photograph of Ravel Morrison around the internet earlier today, the tweeters and retweeters noting with interest that he was standing in front of a car with some friends whilst simultaneously black, yet appalled that anybody might think they were seeking to imply anything. Why was the word 'homies' in inverted commas? Er, well ... it just ... was. 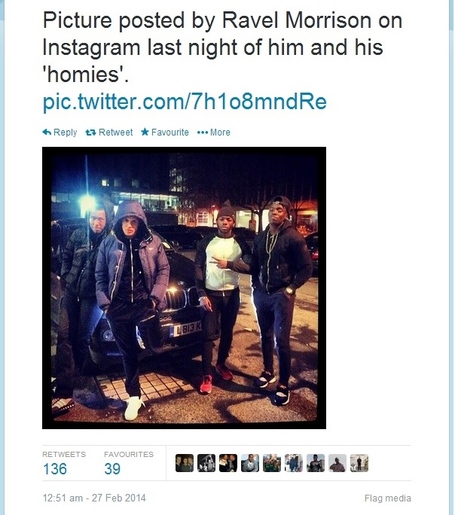 This isn't to equate some dumb and thoughtless tweeting and re-tweeting with the quenelle, of course; merely to illustrate the broader point. Discrimination comes in many flavours, overt and implicit, intended and reflexive, and the professed intentions of those involved are only ever part of the picture. Not least because anybody that does make a genuine mistake tends to have absolutely no problem acknowledging and apologising immediately.

Back to Anelka. As thin as his purported defence appears to have been, it's been accepted, and we don't have the detailed reasoning before us. What's never been clear, though, is why the process for dealing with such offences takes professed intentions into account at all. It's not as though any footballer is going to march into a hearing, bang his fist on the table, and loudly proclaim: "I insulted that man because I am a giant racist". Far better to take the plea of misunderstanding, or ignorance, or sarcasm as read, and just pay it no mind. Strict liability, all down the line. It sounds harsh; it is harsh; it should be harsh.

Because where a three-match suspension for a bad tackle makes at least some sense in a footballing context, there's no reason why racist abuse should be treated as something similar but slightly more serious. Why not a ten-game ban? Why not fifteen? Why not -- for something that exists in a whole 'nother universe of wrong from a mistimed tackle or a stray elbow -- fully half a season? At the very least it would encourage people to research their celebrations.

Extend the bans, and take the intention out of it; leave the footballers to deal with their own reputations. That way, the wider public wouldn't be left wondering about a verdict that on the one hand says 'yes, he did a anti-Semitic thing' and on the other says 'but that doesn't matter very much'. Kick semantic cavilling out of racism.