Who's to blame for the Carlos Vela saga?

Real Sociedad star Carlos Vela still refuses to play for Mexico. How did we get here, and who's to blame?

Share All sharing options for: Who's to blame for the Carlos Vela saga?

One of these players is not like the others: Zlatan Ibrahimovic, Radamel Falcao and Carlos Vela.

While all three will not be at the World Cup this summer, only one will miss it by choice. Ibrahimovic's Sweden team didn't qualify and, barring a remarkable recovery, a torn cruciate ligament will keep Falcao sidelined. But Vela just doesn't want to play. Well, at least not for Mexico.

The 24-year-old's odd reluctance to play for El Tri has been a running storyline in his country, and continued on Monday when FMF officials traveled to Spain for a meeting with him. He told them he still didn't want to play for Mexico.

Vela has been on the outs with Mexico since 2010, originally suspended then not called up and, for the last two years, rejecting call-ups. And despite that, Miguel Herrera and a FMF delegation flew across the Atlantic to essentially hand him a spot on the World Cup team.

In the span of two days in Spain three dominating streaks came to an end while something that hasn't happened in 18 years finally did.

His response? "No thanks."

Vela released a statement saying that he was not 100 percent mentally committed to playing for Mexico and would not want to take a World Cup spot away from a player who put in time with the team through qualifying, especially when things went sour.

It is an admirable stance. It is also a curious one. Then again, just about everything about the Vela saga has been curious.

Ever since September 7, 2010, Vela and Mexico have had a totally unique and perplexing relationship. That morning, he was a youth team star, had seen Primera Division clubs battled for his signature, joined one of England's biggest clubs and had established himself as a fixture for the senior team. Three months after having played for Mexico in the World Cup, this was supposed to be the start of a new cycle, one in which Vela was a Mexican and global star.

By the evening, he was a villain.

The 21-year-old was accused of ignoring manager Efrain Flores in a friendly against Colombia that day and by the time the sun rose the next morning, he had been called everything from petulant to in need of mental help. Fans, former players and seemingly anyone in Mexico who had a voice had all chimed in and you would be hard-pressed to find anyone who sided with Vela. After the match, reports of a party that violated team rules leaked out and by the time the investigation was done, 13 players were disciplined -- none more harshly than Vela and Efrain Juarez, who the FMF banned for six months.

Vela has played for Mexico twice since -- for under an hour total in March 2011. 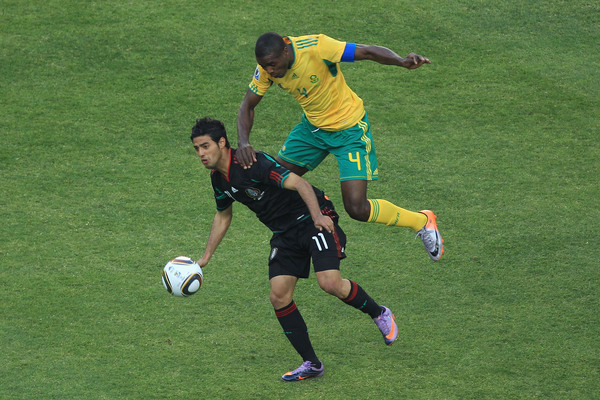 Even when Vela's suspension ended, he was told to earn his place back on the national team. Jose Manuel "Chepo" de la Torre, who had taken over for Flores, sought to remake a team that was perceived to be out of control with discipline and that included Vela. He had to prove that he had learned, matured and could commit himself to a team.

By the end of 2011, it was clear that Vela was good enough for Mexico, shining for Real Sociedad. It wasn't long after that most were convinced of his maturity as he drew praise for his work ethic and the whispers of his selfishness completely disappeared, but he still wasn't a part of Mexico's plans.

Had the FMF blackballed Vela? Was Chepo still unconvinced of his growth? Did Vela harbor ill will in the wake of his suspension and not want to take the country's calls?

It didn't really matter back then. Mexico were on top of North American football in 2011, continuing into 2012. They had won the Gold Cup and were playing brilliant football. Who was Vela going to displace in the team anyway? Javier Hernandez, Giovani dos Santos, Andres Guardado and Pablo Barrera were all in spectacular form and made up one of the best attacks CONCACAF had seen. Some had even thrown the tag "World Cup darkhorse" on El Tri. Vela was, at best, an afterthought.

But while Mexico didn't care much for what Vela or anyone outside of the steam roller that El Tri had become were doing, Vela was getting better and better in Spain. He had become La Real's best player and had drawn interest from some of Europe's biggest clubs. Vela wasn't in the Mexico team and didn't care -- he had a pretty good gig going in Spain.

Then it all fell apart for Mexico. They went through four coaches in 2013, only qualified for the World Cup after going through a playoff, which the only made because the United States saved them from elimination. All of a sudden, missing their best player was a problem.

Mexico's struggles couldn't lure Vela back. Neither could Chepo's firing. Surely, the prospect of playing in the World Cup would do it?

With Chicharito glued to the Manchester United bench, there is no question who the best Mexican player in the world is right now, but he's not playing for Mexico. He won't be playing for them in the World Cup either. The next time Vela plays for El Tri, it will likely have been at least four years since his last appearance for them -- when he side-eyed his manager, partied and got a six-month heave from the FMF.

When your country calls, you answer

That a player as young as Vela would choose not to represent his country in the World Cup is almost unthinkable. Is it indicative of some sort of pettiness on Vela's behalf? A sign that he is still the same player Antonio Carbajal said could "go to hell" in 2010?

Mexico suspended Vela, handing him a ban longer than all but one of the 13 other players involved in a party gone awry. The national team is run by Liga MX owners whose financial interests -- those tied to their clubs -- often supersede their desire to run the football federation as well as they can. Mexico fired Victor Manuel Vucetich after just two matches in charge of the team, showing just how much anyone's resume matters to them.

So who is to blame for Vela's continued absence from Mexico and the fact that El Tri will head to Brazil without their best player? That's less clear than the date Vela next pulls on a Mexico shirt.