Manchester United are not competitive and they don't have to settle for mediocrity.

Share All sharing options for: David Moyes is not the man to fix a broken Manchester United

"I thought it would be a tough year but I hoped it would be more competitive," said David Moyes after a derby defeat to Manchester City, acknowledging that his team were anything but. He continued, "There are a lot of really good players in the squad, a lot of internationals, who, on their day, can be a match for most players," reassuring the public and his dressing room that Manchester United's players are kind of sort of sometimes OK.

Those words were a perfect summary of United's season. They have some hope things will get better and some decent players, but ultimately, the club as a whole just aren't competitive enough. The manager, players and executives included. A lot needs to change at Old Trafford, starting with Moyes.

There was a collective groan at Moyes' team selection on Tuesday, though some rushed to defend it. Not necessarily because they're Moyes defenders, but more because they wanted to believe they weren't about to waste two hours of their time. They envisioned a 4-3-3 in which Tom Cleverley was the furthest man forward, tasked with pressing, or a team that would play directly with Marouane Fellaini further forward.

Instead, what they got was a lot of Cleverley not pressing very much and drifting right for some reason, Wayne Rooney struggling to find the ball in dangerous areas and Juan Mata strangely attempting to track Yaya Toure for long periods of the first half. They didn't defend well, they didn't create chances and they didn't look particularly incisive on the break, even though City were showing them no respect and giving them all kinds of space to break into. City played United like they play mid-table teams and got the same kind of result.

While Cleverley certainly wasn't the reason for the result, United supporters were left to wonder, for the umpteenth time, why he had been selected. Moyes has rushed to Cleverley's defense, completely failing to grasp why he's so harshly criticized.

No one really hates Tom Cleverley, who is perfectly OK at basic football skills. When people shout abuse at Cleverley or say awful things about his family on the Internet, what they're really doing is abusing Moyes for picking him in the first place, since it's not really his or anyone's fault that they're not quite good enough for Manchester United. He's a lot like Darron Gibson and Kieran Richardson before him, except that Ferguson recognized when they reached their ceiling and he needed to stop picking them.

The only reason Januzaj has any creativity left in him is because he's too young to process and execute his coach's instructions.

There's also the matter of Adnan Januzaj, who was left out of the 18-man squad despite there being no hints of a fitness issue. United's young star has been one of few bright spots for the Red Devils this year, but he couldn't even find a place on the bench. His absence is understandable if he has a (currently secret) injury, but otherwise, not even having him available as a potential game-changing sub -- and he's changed the game from the bench on multiple occasions this season -- is ridiculous.

Not just because Januzaj is a very good player, but because he brings a spark, a directness and a willingness to try creative things that no one else has. And, if Moyes' use of Juan Mata and the Spaniard's play is any indication, the only reason Januzaj has any creativity left in him is because he's too young to process and execute his coach's instructions.

It's not exactly a new or original observation that Manchester United look a lot like Moyes' recent Everton teams, but it needs to be stated again because it hasn't changed. This was a problem that existed in August, and most assumed that over time, as United brought in new players and their current players developed an understanding of what Moyes wanted from them, it would slowly go away. But United have made no progress at all and looked very much like a team that deserves a position no higher than the seventh place they occupied before and after their defeat against City.

The entire point of United's team and their method of attack is not easy to discern, nor is Moyes' rational for picking Cleverley. After all, isn't the entire point of Michael Carrick that he is good at recycling possession and dictating the tempo of play? Why would a team need to employ two players who do this, unless they're attempting to keep the ball as a means of defending to earn a 0-0 draw or kill off a game? Especially when Mata is being used as another Cleverley or Carrick, even though he has the capacity to be much more. Here are his final third passes against Manchester City, via FourFour Two StatsZone: 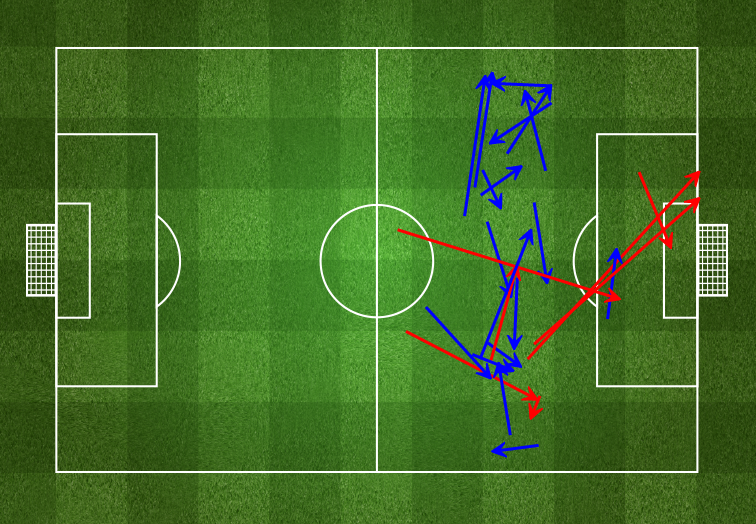 So maybe the point is for other players to act as vehicles to get the ball to Rooney, who is supposed to be the central creative force? It would only make sense, given that everyone else's movement off the ball is alarmingly static.

Well, they're not doing a great job of that either. This is Rooney's passes received in the first half of Tuesday's match. The red circle is my added emphasis, while the one light blue arrow represents a created chance, in the eyes of Opta: 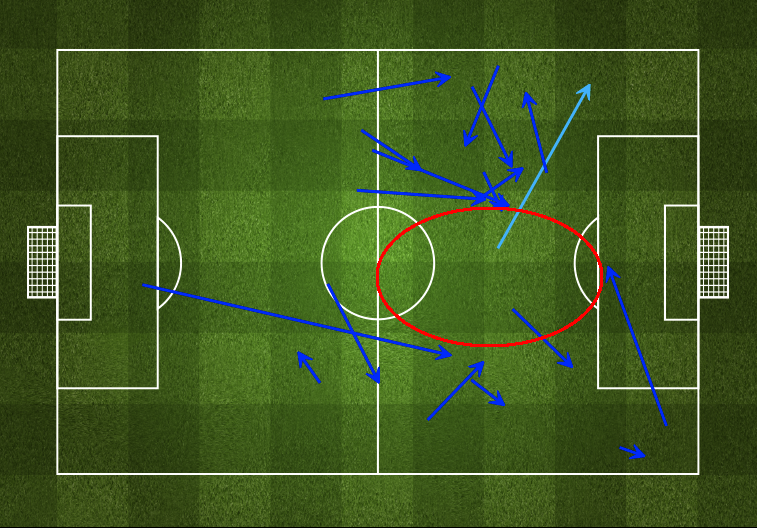 United were horrible at finding Rooney with the ball in dangerous central areas, with only one pass received in a position that could conceivably be called that, and it didn't result in a shooting opportunity or a completed pass for Rooney.

Recyclers of possession who don't do much passing forward are very useful players when the situation calls for them or when they're accompanied by actual playmakers; Sergio Busquets does very little playmaking because he doesn't have to, he's the link between the defense and playmaking midfielders. But United are a team of players who, either due to their limitations as players or their manager's instructions, are simply ball-retainers. They make lots of safe passes until they either cross aimlessly into the box or one of their few players who likes trying things actually tries a thing.

There's a very large group of people on the Internet dedicated to spreading the gospel of Carrick and pointing out that the English just don't understand what he brings to a team. Cleverley has said the same about himself, strangely asserting that the English don't quite get him. But the thing is, the English do get this kind of player, just when they're used to bring the best out of creators. Tottenham fans appreciate Mousa Dembele because he helps Christian Eriksen, and the same goes for Mikel Arteta and Mesut Özil, Gareth Barry and Ross Barkley, Steven Davis and Adam Lallana, and so on.

But this is the team that Moyes has built: A team loaded with players who play conservatively, waiting for Rooney or Januzaj or Robin van Persie to do something. Those three are good enough to haul a team with aging defenders, no athletic presence in midfield and awful off the ball movement to seventh place, but not anything better than that.

Of course, it is worth noting that the lack of a top class central defense pair and defensive midfielder has handicapped Moyes. Ferguson left him with very little in those departments and CEO Ed Woodward has done a poor job of addressing those concerns thus far. But that doesn't explain United's lifeless attack or the transformation of Mata from one of England's most exciting attacking talents into a guy who just helps the team keep the ball, like a better version of Cleverley or a conservative version of Januzaj, neither of which United needed to add to their team.

The thing that separates Manchester United from most teams is that they don't have to settle.

United has plenty of problems that exist independent of Moyes and his poor performance as manager thus far, but that doesn't excuse how bad he's been. He was handed a flawed squad that did not have a realistic chance of competing for another Premier League title, but what he has is definitely good enough for a fourth-place challenge. Not only are United not in that race, they've never even come close to getting involved in it. Moyes may get better with time, but he's certainly done nothing to earn another year.

While it might be hasty for most other teams to fire Moyes after a season like this, the thing that separates Manchester United from most teams is that they don't have to settle. Even without Champions League football, they have one of the biggest names, one of the biggest crowds and one of the highest incomes in world football. They can make whatever manager they want the highest paid coach in the world and promise him a nine-figure transfer budget without batting an eyelash.

Ferguson was given time at United because they were not in a position to make hasty decisions, and because he won 10 trophies at Aberdeen. They were second from bottom in the league when he was hired and in need of a massive overhaul in every way. This United team is a good coach and one good transfer window away from regaining their former status. And as long as that's true, what justifications are their for keeping Moyes other than being cheap and doing a favor for a good friend of Ferguson's?

Moyes has turned good players into mediocre ones, got them playing mediocre football and subsequently producing unsurprisingly mediocre results. United don't have to settle for that. They're one of the biggest clubs in the world, and this summer, they should probably start acting like it.