For the love of Zlatan

If you're sick of Zlatan Ibrahimovic, you might be sick of football entirely.

Share All sharing options for: For the love of Zlatan

Back when he was more hidden gem than global superstar, it was considered cool to love Zlatan Ibrahimović. But now that the majority of football fans worldwide have realized that Sweden's golden boy is, in fact, a footballing god, it's hip to be "so over Ibra". Never has being cool been quite so stupid.

Yes, Nike might have overdone it with their "Dare to Zlatan" campaign, but their over the top advertising doesn't take away from the fact that Ibrahimović is not only one of the best strikers in football, but one of the most exciting personalities in the game as well. You might be sick of being told to "Dare to Zlatan", but it's the perfect slogan for Ibra, selling both his athletic prowess and his larger-than-life personality. Dare to try a thirty-yard bicycle kick. Dare to score with a scorpion flick. Dare to saunter through the penalty box, confident you'll be in just the right place to head in a teammate's cross. Dare, even, to refer to yourself in the third person.

Many of those who profess to hate Ibrahimović find his arrogance supremely annoying. This is, after all, the man who labeled Pep Guardiola as a coward, the man who promised to score more goals than Lionel Messi, and the man who turned down a trial with Arsenal as a youngster because "Zlatan doesn't do auditions." Ibra is — and this is undeniable — a showoff, a mercenary, an attention-seeker, a flaunter of wealth.

He's also a troublemaker — and not the adorable "look at me I set my own house on fire" sort. While at Milan, Zlatan kicked teammate Antonio Cassano in the head mid-interview. During a title race, he managed to get himself suspended but punching Bari defender Marco Rossi: the rossoneri earned just four points during the three games he missed. In the following season, slapping Salvatore Aronica earned the Swede another ban, prompting draws with both Napoli and Juventus. The latter would eventually go on to win the title by four points.

Since moving to Paris Saint-Germain, Ibrahimović has karate-chopped St. Etienne's goalkeeper, was accused of stamping on a Lyon defender and has served a UEFA ban for a foul on Valencia's Andrés Guardado. He had previously threatened to beat up Guardiola and to break Rafael van der Vaart's legs.

And for many, his ego simply does not match up to his ability. With Ibrahimović's offhand, almost lazy playing style, he's an easy target for critics. And so, despite his vast array of trophies and staggering collection of amazing goals, there's a widespread belief that Zlatan doesn't show up in big games

There's just one problem: it's not true.

The myth stems from Ibrahimović's second season with Juventus, when he was fairly anonymous during their Champions League quarterfinal loss against Arsenal. But while that incident may be lodged in Juve fans' minds — and perhaps exaggerated after Ibra's insistence on leaving the club after their relegation to Serie B — it's supremely unfair to say Ibrahimović goes missing for crucial moments. After moving to Inter, Zlatan scored in both Milan derbies in his first season, including a comeback winner in March 2009. At Barcelona, Ibra also scored the only goal in a win over Real Madrid: a vital three points, considering Barcelona ended the season with 99 points to Los Blancos' 96. And in his first season at PSG, Ibrahimović scored four key goals against Marseille, including both in a 2-0 victory that knocked their rivals out of the French Cup.

And it's not as though Ibra hasn't shone on the grandest of stages. In this year's tournament, he's already scored ten, second only to Cristiano Ronaldo. In seven games, Zlatan scored against Olympiacos, put two in against Bayer Leverkusen and Benfica, and knocked five past Anderlecht, with four scored in the first leg.

If that's not evidence enough, think back to two years ago, when Ibrahimović was the key player in Milan's 4-0 mauling of Arsenal at the San Siro. Zlatan scored just one, from the spot, but he constantly hassled the Arsenal defense, breaking free to set up Robinho's header in the first half and laying off for the Brazilian to score his second. That match prompted Richard Williams to write, "Never again will English critics be entitled to cast aspersions on Ibrahimovic's ability to perform on a big occasion." 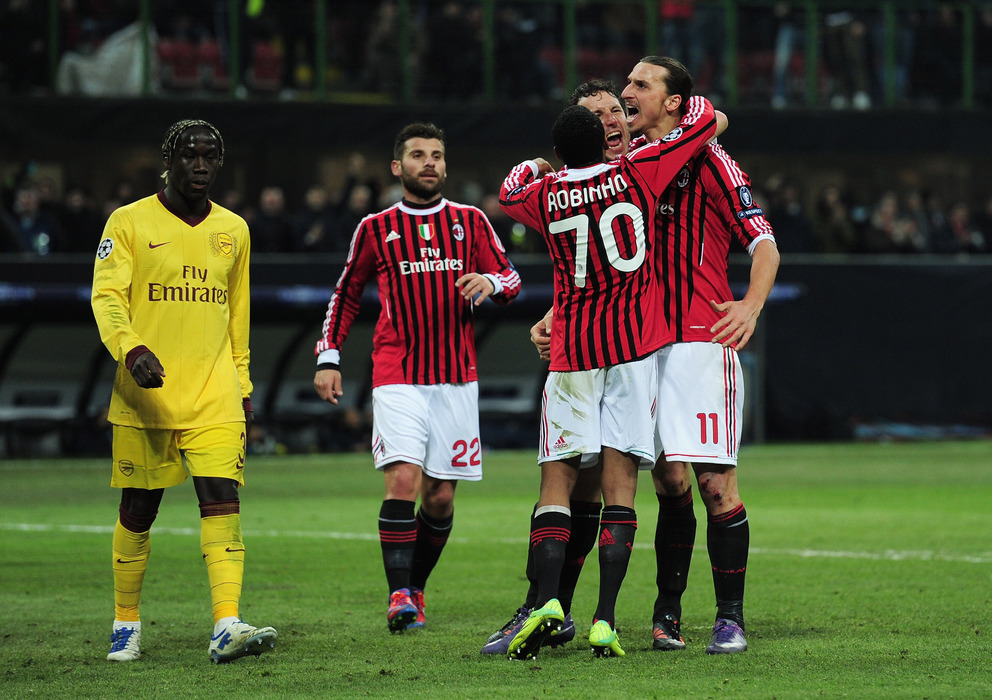 But should PSG falter against Chelsea, if Ibrahimović finds himself shackled by the Premier League's top defense, the old cliches will come back with a vengeance. Zlatan's ever-rising repute means that his detractors are on the lookout for something to put him back in his place. And those detractors are multiplying thanks to the recent, Nike-fueled Zlatan overload.

They're fools. Ibrahimović's numbers, titles, and awards should speak for themselves. But beyond flat data, there's an awe factor surrounding Zlatan that most footballers don't even come close to reaching. At 6'5", it makes sense that Ibrahimović would be a physical player, able to muscle past defenders without losing the ball and create space simply by being.

What doesn't make sense, especially for someone who looks so ungainly, is his technique and his flair. Surely Zlatan should be tripping over his own feet when he tries a cheeky backheel, but instead the ball lands in the back of the net. He shouldn't be graceful enough to wind his way through the opposition, yet he can twist and turn as though he's operating according to different laws of physics than those accessible to the rest of us mere mortals.

Lobs. Volleyed back-heels. Screamers from distance. Zlatan can, and will, score them all, and he'll make mouths drop in the process. That — the flair, the charisma, the wonder he inspires, combined with the results it produces — is why the Golden Boy is one of the world's best.