Chelsea vs. Atlético Madrid preview: When will the deadlock be broken?

Chelsea held Atlético Madrid to a goalless draw in a cagey first leg at the Calderón, and we'll almost certainly see as cautious a game in the reverse fixture at Stamford Bridge on Wednesday.

Share All sharing options for: Chelsea vs. Atlético Madrid preview: When will the deadlock be broken?

When you get two counterattacking teams meeting in a Champions League semifinal, you'd probably expect a cagey affair. So it proved in the first leg of Atlético Madrid and Chelsea's tie at the Vicente Calderón, where there was barely a single goal-scoring chance in the entire match.

Atléti were forced onto the front foot and spent much of the game looking unsure of what to do in possession, often resorting to pumping the ball into the box and hoping Diego Costa would be there to get on the end of it. However, Chelsea's defending was excellent, and kept their Spanish hosts at bay.

We'll probably see an equally cautious affair at Stamford Bridge on Wednesday, where both sides will be pretty content to let the other take control with the hope of breaking forward into space at the back. It almost certainly won't be the most spectacular game you've ever seen, but a nervy tactical battle that could quite easily go all the way to penalties. And who doesn't love penalties?

When we last met

Atlético Madrid 0-0 Chelsea. Atléti pretty much dominated the first leg at the Calderón, but Chelsea were supreme defensively and prevented them from taking a first leg lead.

Astonishingly Chelsea could have both goalkeeper Petr Čech and defender John Terry back in action for this match, despite both players leaving the first leg with seemingly season-ending injuries. They both returned to training on Tuesday, along with Eden Hazard and Samuel Eto'o, who both missed the first leg altogether. However, the Blues will certainly be without the suspended John Obi Mikel and Frank Lampard, while January arrivals Mohamed Salah and Nemanja Matić are cup-tied.

Atléti are much better off on the team news front, with only midfielder Gabi unavailable for sure -- he's suspended. Arda Turan also has a slight groin problem, but he'll be in contention to play. Other than that, coach Diego Simeone should have a full-strength squad to choose from. 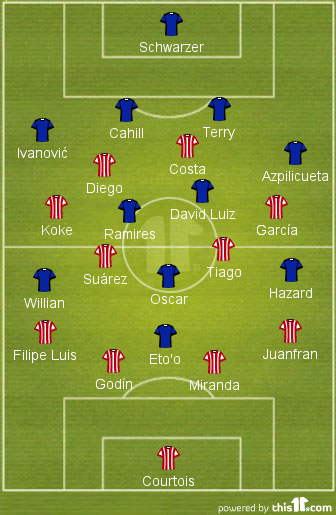 The possession battle - Usually you'd expect the winner of the possession battle to be pretty pleased. Not in this tie. Both of these sides love to catch their opponents off-guard with quick breaks forward, using their pace to drive into space behind the defence. Atléti's attacking threat was excellently nullified in the first leg by Chelsea just sitting deep and letting them have the ball, so it'll be interesting to see if they tweak their gameplan for the reverse fixture.

Samuel Eto'o vs. the Atléti defence - Chelsea defended excellently in the first leg, though the same can't be said for their attacking play. José Mourinho opted to start former Atléti forward Fernando Torres alone up front, but the Spaniard was typically poor when it came to quick counter-attacks. He gave the ball away far too easily, and generally didn't offer much of an out-ball when the Blues looked to hit Atléti on the break. The good news is that Eto'o should be fit to start here, and while he's no longer world class, a good performance from him could prove to be the difference in a fixture of very fine margins.

It's going to be very, very tight indeed. The return of Eden Hazard will be a major advantage for a Chelsea team that really struggles to break down well-organised defences, though Atléti may well feel more comfortable sitting deep at Stamford Bridge than they did in front of their own fans. With their added individual quality up top in Diego Costa, I reckon they could just snatch it. 1-0 Atlético Madrid.