Josep Maria Bartomeu has poured gasoline on what was already a sizable fire.

Share All sharing options for: Barcelona president's response to FIFA is hilarious

Barcelona fans, I have some bad news. Your club is officially in the middle of a crisis. It appeared that the Blaugrana had managed to get through the entire Neymar signing investigation with just a few scars, but Tuesday's bombshell from FIFA has caused the smoldering embers leftover from the Neymar controversy to burst back into flames. If there was ever a time for level-headed PR, it's now. Unfortunately, club president Josep Maria Bartomeu has offered the opposite.

On April 2, Barcelona was handed a one-year transfer ban and a fine by FIFA, which accused the club of severely breaching the rules regarding the international transfers of under-18 players. The club responded on Wednesday with an 14-point manifesto official statement that outlined their various disagreements with FIFA, rather notably failing to actually deny any of the allegations directed at them.

On Thursday, Part 2 in the Blagurana reaction to FIFA arrived through Bartomeu.

A public response to the crisis and follow-up on the statement from a leading figure at Barcelona makes sense. With the club in real trouble, who better to calm things down than the club president? As it turns out, the answer is probably "pretty much anybody."

Who better to calm things down than the club president? As it turns out, the answer is probably 'pretty much anybody.'

Bartomeu did little to calm or clarify the situation, instead sliding into a PR disaster. Rather than coming across like a man in control, Bartomeu did his best imitation of the crazy guy at the bus station handing out flyers about the dangers of putting fluoride in the public water supply.

It started so well, too. The president issues a company line response to FIFA's charges, claiming that the club would appeal the sanctions, taking the issue to the Tribunal d'Arbitratge de‘ Esport (TAS) if necessary. He claimed the club has not broken any rules and expressed his displeasure with FIFA over the incident.

If Bartomeu had stopped there, we wouldn't be accusing him of acting like a lunatic. If he'd just stuck to PR 101 talking points, everything would be just fine. Instead, the acting president of one of the world's biggest football clubs proceeded to nonchalantly pour gasoline on a raging inferno. He threw down the conspiracy card. 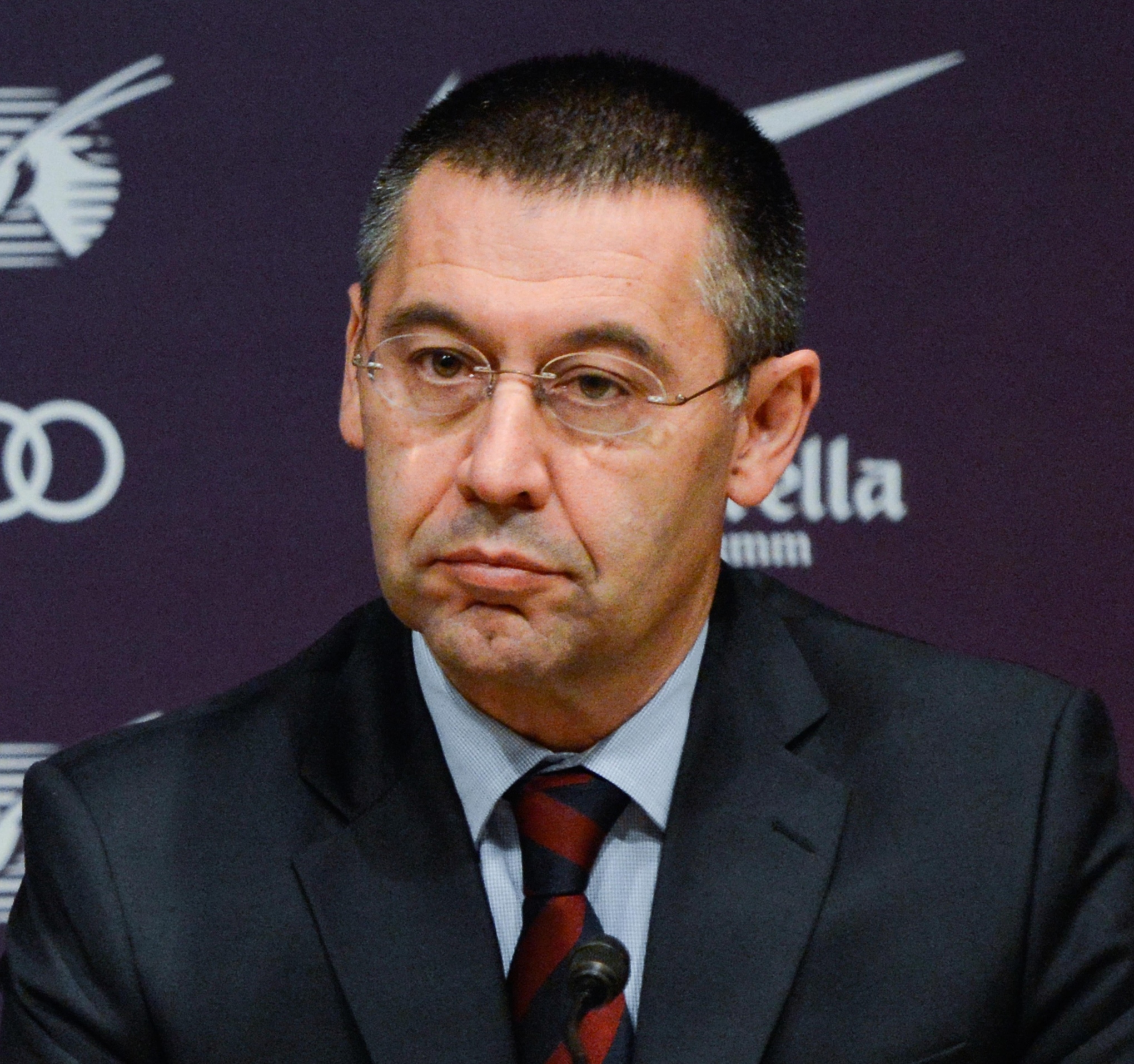 .@jmbartomeu: "For a while now we have noted that someone was trying to harm Barça. We are investigating that" #FCBlive

"Someone was trying to harm Barca." "We are investigating that."

Bartomeu: "We are investigating where the anonymous complaint came from. Barca have done nothing wrong, we just looked for talent."

At this point we started getting visions of clandestine men wearing trench coats and dark sunglasses standing on street corners across Spain, touching their ears every time they talk.

At least he didn't double down ... oh dammit.

.@jmbartomeu: "Things are done properly here. We are the biggest Club in the world and maybe somebody doesn’t like that #fcblive

Shadowy figures! Conspiracies! This is amazing stuff. Surely at this point some forward thinking PR flunky cut the mic, or stepped onto the dais and whispered something in Bartomeu's ear to slow him down, right? Nope.

Bartomeu: "We are not claiming to be victims, we are fighting against something injust. Barca is an exemplary club."

Wait a second, you're not claiming to be a victim? You just said that "someone was trying to harm Barca", which rather implies that you're the victim of an organized plan to hurt the club. You can't have your cake and eat it too.

Bartomeu best zinger yet: "We agree with the regulations, what we want is for clubs like Barca to be an exception."

Congratulations Mr. Bartomeu, you are the fluoride guy.

In the wake of this press conference are even more questions, not least of which is what on earth Bartomeu thought he was doing. The club could have protested their innocence, but they haven't. In fact, it sounds more like they realize they've been caught with their hands in the cookie jar and are simply refusing to be held accountable for their transgressions.

All that we've been offered are flimsy excuses based on Barcelona's stature as an enormous club. The Catalans are convincing nobody, and come across like a club left desperately scrambling after getting caught breaking rules that they'd convinced themselves they were above. No one is above the law, not even Barcelona.

If they're guilty, they need to deal with the repercussions of their actions. If they're not, or they genuinely believe they've done nothing wrong, they should address the charges appropriately and appeal. Instead, it's conspiracy o'clock. More than a club, indeed.