Timbers vs. Sounders, a gift from the soccer gods

Share All sharing options for: Timbers vs. Sounders, a gift from the soccer gods

Soccer games with lots of scoring and bad defending are often contentious affairs among fans. They're lots of fun to most people, but an interesting subset of people likes to use derisive language to describe extremely high-scoring matches, like Saturday's 4-4 draw between the Seattle Sounders and Portland Timbers.

While the game featured some bad defending, it was not a game about bad defending. It was a game about incredible momentum swings and it featured each team's best attacking players turning in their best performances of the season. When it was all over, Seattle and Portland had left the audience transfixed, wondering what the hell they'd just seen.

Kenny Cooper was one of the first signings made by the MLS edition of the Portland Timbers. While he contributed eight goals in his only season with the club and scored their first ever MLS goal, he was ultimately disappointing and, due to his high salary, was shipped out. He was booed heavily by the Portland crowd when he was introduced on Saturday. He responded by scoring the game's opening goal.

Why did it have to be Cooper? A goal from anyone but Cooper would have stung less for Portland. Okay, so maybe not Clint Dempsey, but still. Why Cooper? The Timbers Army kept signing, but don't let them tell you that they weren't equal parts angry and worried for the next six minutes. A 1-0 home loss to the Sounders with Cooper scoring the lone goal would have stung just as badly as any loss in the club's history.

The Timbers fought back, thought they had gained the upper hand, then found themselves matched. When the halftime whistle blew, the sides were locked up at 2-2, and the game's status as an MLS regular-season classic had already been cemented even though four more goals were yet to come.

If Saturday's game had one major overarching theme, it was that good players did cool things in ways that we haven't seen them pull off recently. This applies most to Diego Chara, the first Designated Player in Timbers history. He was solid in 2013 after turning in a couple of disappointing years previously, but he has never been much of an attacker. Even his most ardent backers were stunned when he hit the back of the net with a laser beam in the 9th minute.

Five minutes later, Diego Valeri scored his first goal of the season. Last year, Valeri was an MVP candidate, recording 10 goals and 13 assists in his first season in the league. So far this season, he's looked like he spent an entire offseason forgetting what made him so great, but he looked every bit the part of the league's most complete attacking midfielder with his excellent narrow-angle strike.

United States men's national team fans with no vested interest in the outcome of the match got a chance to cheer like ECS 10 minutes after that when Clint Dempsey hit the back of the net. They probably felt a bit better about Dempsey's form heading into the World Cup after this. They'd feel even better by the end of the match.

How these teams didn't manage to score more goals between Dempsey's 24th minute effort and the halftime break is anyone's guess. They battled back and forth, with Seattle's forwards looking capable of putting together another scoring move at any time and Portland's Darlington Nagbe turning DeAndre Yedlin inside-out on multiple occasions.

"There was times when I was a little over-aggressive with him," said Yedlin about marking Nagbe. "He’s a guy that you can’t do that with because he can slip you pretty easily." And Nagbe did slip Yedlin easily, repeatedly. Incredibly, it didn't lead to the Timbers attacker posting a goal or an assist. It's a shame, since it was probably his best performance of the season.

Eventually, Yedlin would stop looking like a turnstile and become a hero for his team, but not before they fell on their faces.

Here's where the bad defending comes in.

While this game was more about attacking players bringing their best than defenders making mistakes, it would be disingenuous to gloss over the nightmare three-minute spell that Jalil Anibaba turned in for the Seattle Sounders. He can't be called solely responsible for Portland's third and fourth goals simply because that would be disrespectful to Chara and Maximiliano Urruti, but he was bad.

As Kyle Martino mentioned on NBC Sports Network's broadcast of the game, the mark of a quality league is not necessarily whether or not defensive mistakes are made. It's more about whether or not the players on the other end of those mistakes are good enough to capitalize and make defenders pay. Portland's players were, in the 55th and 57th minutes. 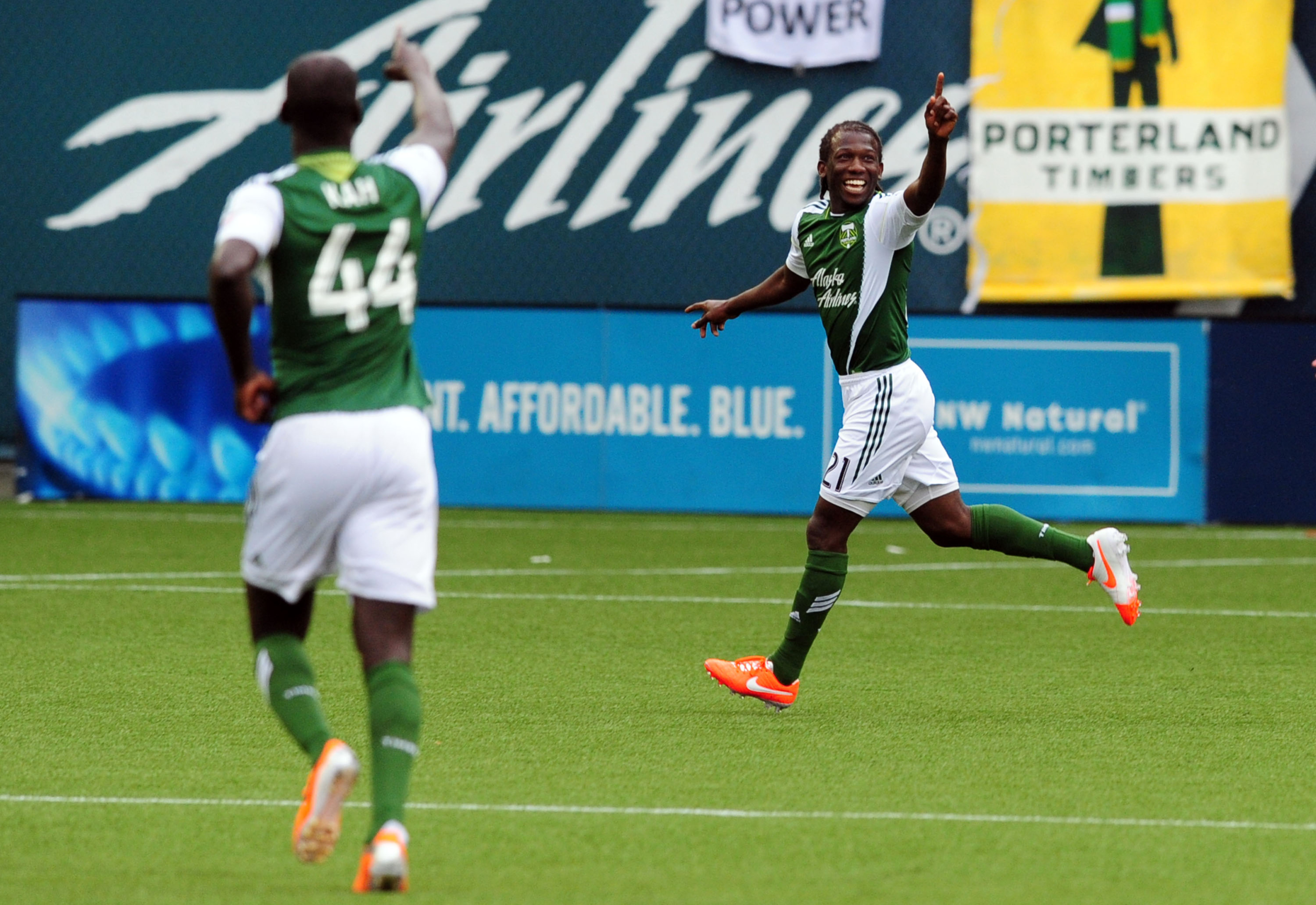 Second, the turnover. Anibaba got blasted off the ball by Urruti, who, according to their listed attributes, he outweighs by 20 pounds. Urruti has struggled since his arrival in MLS, but showed everyone why he was so highly touted, curling arguably the best goal of the match around Frei's outstretched hand from 20 yards.

At this point, it looked like the Sounders were sinking without trace. Portland had more shots after Urruti's goal, including one off the crossbar that Yedlin unknowingly cleared off the line with his face. Seattle didn't respond with a shot of any kind until the 77th minute.

That 77th minute shot came from Obafemi Martins. It was a header from five yards that went over the bar, off a cross by Dempsey. He should have hit the target, but that's not terribly important, at least in the context of how the game concluded. What's important is that this was when the game turned. From this point forward, the Sounders were the better team. No one could have predicted a draw after Martins' miss, but a third Seattle goal to set up an exciting conclusion felt inevitable from that point until Dempsey scored.

In addition to the change in momentum brought on by that move, a pair of substitutions turned the tide of the game as well. Seattle brought true winger Lamar Neagle on for Kenny Cooper, a center forward masquerading as a winger, right after Portland's fourth. The Timbers brought Nagbe off for defensive-minded midfielder Ben Zemanski in the 85th minute, a sensible move for a team that had a two-goal lead with five minutes remaining in regular time.

Neagle helped set up Dempsey's second by turning away from Michael Harrington before flinging a hopeful ball into the box, which Martins helped into Dempsey's path. As is customary in this situation, the viewing public exclaimed that the match just got interesting. When teams trail by two goals with very little time left, they score quite frequently, eliciting this reaction. Usually, they end up not scoring a second, then we forget about it. This was one of those games when that goal actually resulted in the match becoming interesting.

Re-enter Yedlin. When we last left him, he was getting worked by Nagbe. He was about to close out a week that started with him getting a USMNT cap by looking like one of the primary culprits in a loss to a rival, but instead, he's a Cascadia Cup hero. And he was ready to take a dive to become one.

"I thought this was our last chance, so I figured I'd spring for the ball," said Yedlin about the move where he drew a penalty on Zemanski, Porter's seemingly adept defensive substitute. "I'm glad he touched me because I was trying to draw the penalty either way. If he fouled me or didn't foul me, I was going to try to draw the penalty."

Dempsey stepped up to the spot and scored, rescuing a draw and completing a hat trick. Over the winter, American fans were left to wonder if the Dempsey they knew and loved had left them when he left the Premier League for Seattle, but he already has four goals this season. He only has two starts.

Instead, he's a Cascadia Cup hero. And he was ready to take a dive to become one.

A lot of great players turned in great performances on Saturday. The Timbers and Sounders have accumulated some of the league's top stars and all of them brought their best, something that's pretty rare. Usually, due to a combination of factors, some of a team's attackers are very good and some are not in any given game. In this game, every attacking player was sensational at best and solid at worst.

This game was also interesting because both teams could have very easily started playing conservatively at 1-1 or 2-2, but didn't. They went for it for 90 minutes, and because they have talented players, that resulted in eight goals. We should be thankful.

Ultimately, this game will be remembered for seasons to come and brought up in any discussion of the best MLS matches ever for the foreseeable future. Some people won't like that because they don't enjoy this type of game, but it's very important to remember that these people are fun-suckers.

It's okay to like well-defended, scoreless games, and gush about things like clearances, the positioning of a defensive midfielder and a manager's brilliant tactics. Some of the people who do this are just contrarians, but lots of them are genuine.

Everyone is allowed to enjoy sports in different ways and finding enjoyment in matches that are devoid of scoring chances is a very good thing. But an issue arises when fans take their love for expert defending too far and declare that matches like Saturday's are bad. This was not a bad game, because there is nothing bad about fun, and eight-goal games with two-goal road comebacks are as fun as sports come.

Awful defending or not, this edition of Sounders-Timbers was a gift from the soccer gods.