FC Barcelona did not have the best of times during the 2013/14 season.

With the lofty goals that the club had set for itself with its achievements over the last few years, second in La Liga, runners-up in the Copa del Rey, and Quarterfinals in the Champions League (despite lots of off-the-field happenings that clearly affected the organization) was seen as a disappointment for the club that had won everything that there is to win in club soccer.

A new manager, Luis Enrique, has joined the fold for the 2014/15 campaign. This is seen as a fresh start for FC Barcelona and Nike are doing their best to reflect that sentiment with a return to a simple and classic blaugrana stripe motif for Barça. 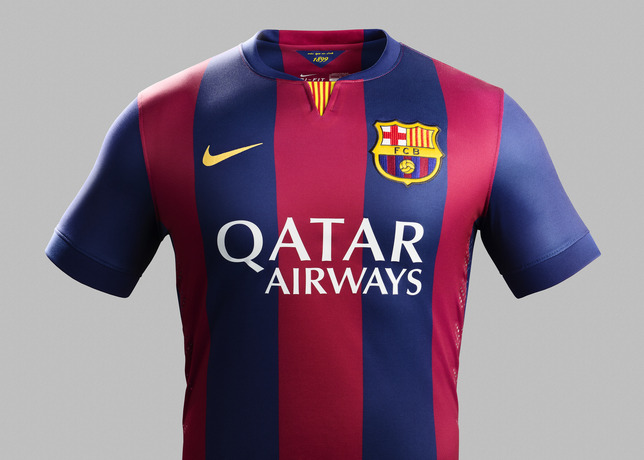 The new kit aims to unite the club from the youth levels at the famous La Masia all the way up to those plying their trade week in and week out at the instantly-recognizable Camp Nou. As such, the likes of Sergi Samper, Edgar Ié, and Jean Marie Dongou Tsafack are joined by Xavi, Gerard Pique, Andres Iniesta, Neymar, and Lionel Messi in unveiling the new kit.

The shirt features wide, alternating blue-and-red stripes in deeper tones of the two colors. The shirt features an enlarge crest on the upper chest, inside a blue stripe with a gold Nike Swoosh on the opposite blue stripes. The three red stripes are surrounded by fully blue sleeves on both sides of the shirt while the Qatar Airways sponsor logo is in all white on the center of the shirt. The collar is a relaxed crew that cuts into a V-neck at its crest with a traditional Senyera flag taking its spot front-and-center. It is the first time that the flag has taken its place on the front of the shirt, having appeared on the sides and on the sleeves before.

The shirt is paired with blue shorts that featured a red stripe running down both sides. The socks are also blue with a thick red band on the top and red chevrons running up the back. They feature the word "Barça" on the front, in bright yellow. The same accent can be found on the back of the shirt, at the neck, in the club's signature font. On the inside of the neck is a blue pennant tab with Barça's motto of "Mes que un club" and 1899 (the year that the club was founded) on it. 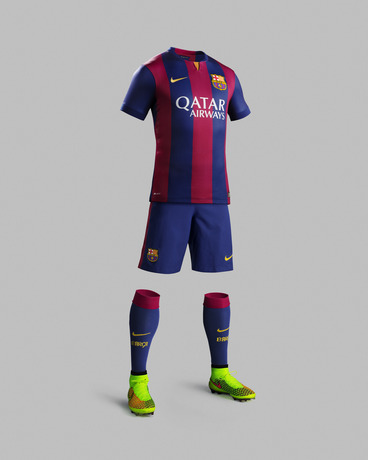