Real Madrid were less than two minutes from failing in their bid to become the first team to win 10 European Cups. Then Sergio Ramos came to the rescue in stoppage time, forcing an extra 30 minutes, where Gareth Bale became the hero with a winner in the 110th minute.

Los Blancos overcame a mistake by Iker Casillas that led to Atléti's goal, and a suburb team defensive performance by Los Colchoneros to pull off the victory in Lisbon. The 4-1 final score was hardly a fair representation of the match, as Real Madrid pulled away in extra time thanks to a goal from Marcelo and penalty by Cristiano Ronaldo.

More on the final

Because there is no other way for Cristiano to celebrate

More on the final

Diego Costa surprised everyone by starting the match, but his presence on the pitch lasted just nine minutes as the striker was subbed off for Adrián. Costa didn't stop to talk to anyone, running straight off the pitch and down the tunnel. It was the most notable occurrence in the opening 10 minutes of the match, which featured plenty of tight and physical play.

Real Madrid's first real chance of the match came in the 23rd minute after Ángel di María was brought down on the left wing, a few yards out from the Atléti box. Luka Modrić's curling free kick appeared to make Thibault Courtois freeze for a moment before the Atléti keeper went up and grabbed the ball.

The physicality continued to ramp up as the first half went on, threatening to boil over in the 27th minute when Raúl García was shown a yellow card after committing a hard tackle from behind on Di María. Sergio Ramos, in his infinite wisdom, ran up and got into García's face, earning a yellow card for the Real defender.

Tiago Mendes nearly gifted Real Madrid the opening goal after making an atrocious turnover in the midfield that allowed Gareth Bale to race in on Courtois. Bale somehow managed to push his shot wide of the post, despite looking like he was sure to put his side in front.

Then it all went wrong for Real Madrid on a corner kick in the 36th minute.

Koke's initial corner was cleared out of the box, but Juanfran put it right back into the mixer, where Iker Casillas had gotten himself stuck in no man's land, a good five yards off his line. Diego Godín, the hero of last week's match against Barcelona, got his head on the ball and lobbed it over Casillas. Despite a desperate scramble by the goalkeeper to swat the ball off the line, he wasn't quick enough, and Atléti took a 1-0 lead. 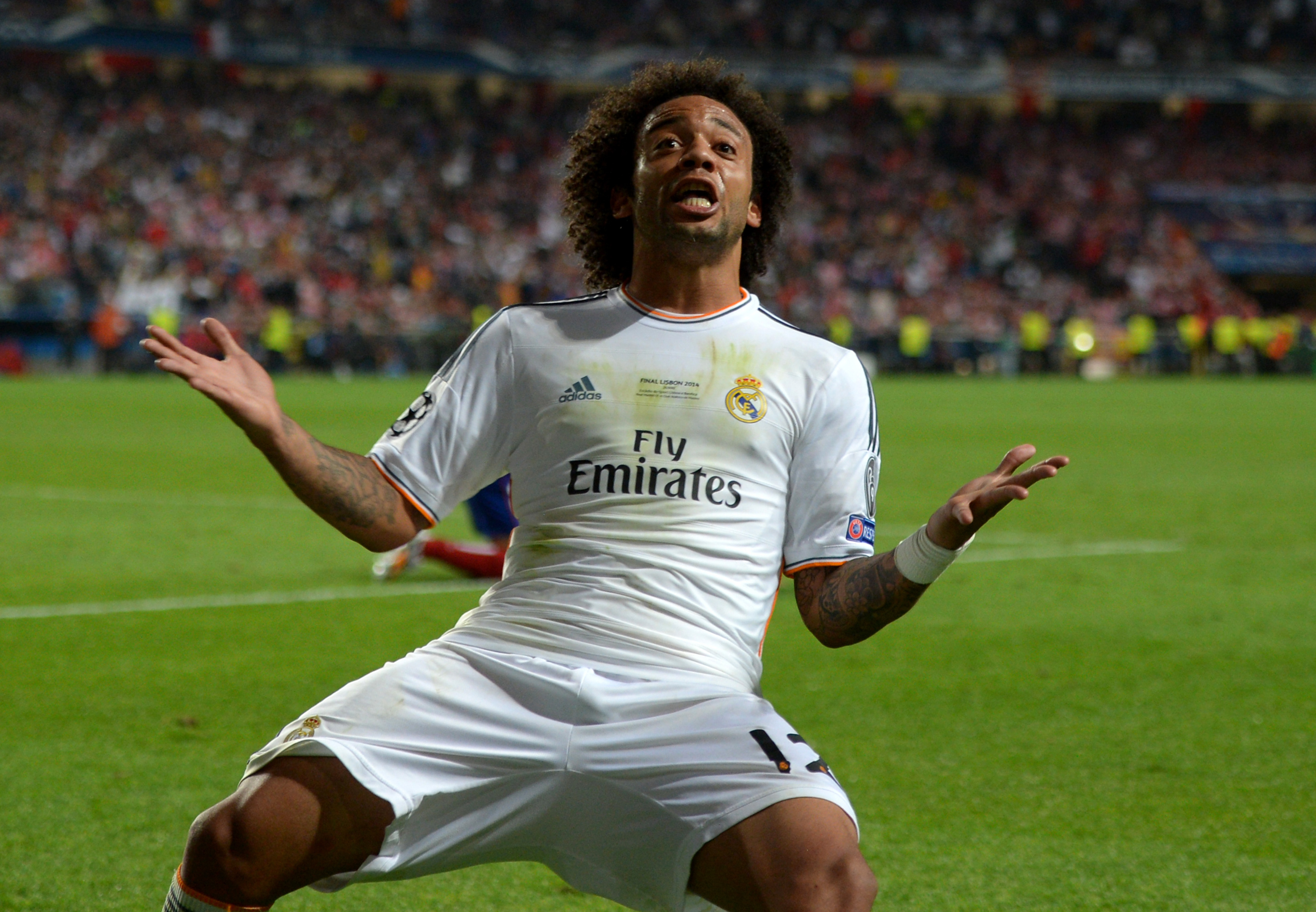 Di María again made a nuisance of himself, drawing a dangerous free kick opportunity for Real Madrid in the 52nd minute. Ronaldo took his time lining up his shot, got it up and over the wall, but was denied by the very tall man named Thibault Courtois in Atléti's goal. Ronaldo got another chance on the ensuing corner kick, but his shot from short range was deflected wide.

Ronaldo missed another equalizer in the 62nd minute, just missing solid contact with his head on a Sergio Ramos cross. Karim Benzema tried to get a foot on the ball as it skipped by the far post, but he was a step behind as well.

Bale missed his second great chance of the match in the 73rd minute, picking up the ball in a rare pocket of space on the edge of the Atléti box. Once again, what seemed like a sure goal came to nothing as the Welsh winger dragged his shot wide of the post.

A third miss? Yep, in the 78th minute. Bale raced by Filipe Luis into the box, but once again his shot was off target, hitting the side netting. A slight bump or tug by Luis as he took his shot probably didn't help, but still, it was another frustrating wasted chance.

Real Madrid's furious assault on the Atléti goal intensified as the final minutes of the match ticked away. Despite chance after chance, close call after close call, Los Blancos simply couldn't solve Atléti's brilliantly stubborn defense. At least until the third minute of stoppage time.

Sergio Ramos got free on a corner kick and headed the ball down, just past the outstretched arm of Courtois to pull Real Madrid even at 1-1.

So on we went to extra time ... where absolutely nothing went right for Atlético Madrid.

Di María was the catalyst behind the match winner in the 110th minute, breaking past the injured Juanfran, and forcing a save from Courtois that popped the ball up in the air towards the far post. Bale, who was trailing the play, got up and headed the ball into the wide open net, making it 2-1.

Marcelo finished the match off in the 118th minute, taking advantage of an exhausted Atléti defense and hammering a low shot off Courtois' hands into the back of the net, making the score 3-1.

Things got even worse in the 120th minute when Ronaldo earned a soft penalty, and beat Courtois to make a close game look like a rout at 4-1.