World Cup fans come for the America. Will they stay for soccer?

The World Cup is for soccer fans, but for the U.S., it's also about turning people into soccer fans.

Share All sharing options for: World Cup fans come for the America. Will they stay for soccer?

The United States has embraced soccer, distanced itself from it, embraced it again, left it to die and then, finally, grown to love it over the last century. But even as the sport has taken massive strides, it generally remains in its little bubble, beloved by growing diehards, but somewhat invisible to large swaths of the country.

That is, until the World Cup.

For more than 20 years now, the World Cup has served as the best chance to grow soccer in the USA. Even if the U.S. gained a million fans over the last three years, that's nothing compared to what they can achieve in three weeks this summer. Such is the nature of the sport in this country and the appetite for mega events.

More on the USMNT

Bradley needs help and the US diamond needs time

Jurgen Klinsmann's diamond midfield makes sense as a concept, but only if the right players are around Michael Bradley.

More on the USMNT

Bradley needs help and the US diamond needs time

The long road to Brazil didn't start on Tuesday. But in San Francisco, for a friendly against lowly Azerbaijan, we started to see signs of what we can expect from fans in the tournament itself as the casual fans embark on the journey as well. The American Outlaws took up their usual three sections, but the rest of the crowd was wildly dissimilar to what we saw in qualifying, perhaps because the majority of them had no recollection of how exactly the team had qualified. They were first-timers, caught by World Cup fever and out to support their country.

The inexperienced enthusiasm of the new fans was both amusing and inspiring. Gone was the applause over minor technical moves -- the pinpoint clearance or the deftly-executed cross-field switch went mostly uncommented on. Instead, we had continuous, rolling outbreaks of raw patriotism; massed chants of "U-S-A" became something like background noise, the stage upon which the hosts' routine 2-0 win was played out.

The sheer quantity of the new fans present at Candlestick Park was best evidenced by the lines for the merchandise stands. Normally only a dozen or so strong, for this match (a friendly! Against Azerbaijan!) the ranks had swelled to 30 or 40 souls, all eager to grab whatever USA gear they could find, rip off the tag and go back to their seats to cheer on their country in more appropriate attire.

One elderly lady walking in immediately made a beeline for the merchandise stand. She bought a shirt and hat and joined in with a fist pump as a passing group chanted "U-S-A!" Her watching husband chuckled, but then he bought a hat of his own. 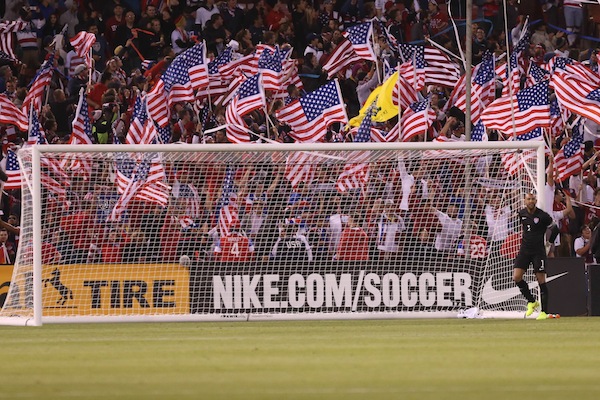 "As soon as I saw the U.S. was playing here I bought my tickets," she said. "I've never been to see soccer and I don't know any of the players, but they're American and I'm American."

For many people around the world, but especially Americans, that is all it takes. The stage, the spotlight and the drama are all enough to intrigue a person, but a rooting interest makes for appointment viewing and there's no easier rooting interest than your country. Americans love to root for other Americans -- they would yell and scream about basket weaving if it was an Olympic event -- and the World Cup isn't just a chance to do that, it's a chance to do it in the world's biggest sporting event. That's what brings out the kids, their parents, their grandparents and anyone who can get their hands on a flag.

The stands were full of kids, who probably play but are unlikely to remember much about America's previous excursions to the tournament or to have paid too much attention during the unglamourous grind of qualifying.

"I'm a midfielder so my favorite player is who is in the midfield," an eight-year-old said as she pulled on her new jersey. She didn't know the names of the midfielders, but that didn't seem to matter. "I hope he scores 10 goals," she added before sprinting over to a group of chanting fans, joining in with their "U-S-A" as her mother yelled after her.

These scenes aren't particularly rare during U.S. games, but now that the qualifying cycle is over and the World Cup is virtually upon us what's normally a slow trickle is becoming a torrent. A match against Azerbaijan isn't anything like the real thing (even if the dilapidated state of Candlestick might not be too far from what the U.S. sees in Brazil, facilities-wise), but the games probably aren't what matter. In three weeks, American will turn its gaze to an often neglected sport, cheering on a team that finds itself representing the country on the biggest stage.

"America is the best," said our eight-year-old midfielder. It's as good an answer as any.