Brazil vs. Croatia, 2014 World Cup: A primer for new fans

Brazil will expect nothing less than a comfortable win against Croatia in the opening match of the 2014 World Cup, which they should be capable of getting. But the unbelievable pressure on the hosts could prove problematic against a side which could pose a significant early threat.

Share All sharing options for: Brazil vs. Croatia, 2014 World Cup: A primer for new fans

Brazil and Croatia will kick off the opening match of the World Cup (4 p.m. ET, ESPN) with very different feelings. The pressure on Brazil will be utterly unbelievable, and anything other than a convincing win against Croatia will start to see serious questions asked after just one game of the tournament, while their opponents will be hoping to take anything they can get, as they hope to qualify from the group ahead of Mexico.

Everybody knows that Brazil are famed for playing glorious, free-flowing soccer with flair and skill, but that's a very simplistic outlook. Particularly in recent years, Brazil have tended to be at their best when the core of the team is lined up in a pragmatic, defense-first mindset, which allows their talented forwards to be liberated and operate at their best up front. This was what the manager, Luiz Felipe Scolari, did when he won the World Cup before.

Everything you ever needed to know about the world's most exciting tournament.

The problem is that at that time, Brazil's front three consisted of Ronaldo, Rivaldo and Ronaldinho -- three utterly world-class attacking talents, with plenty of support from their rampaging wing-backs. Now, with the attacking talent not quite in the same class, Scolari has opted for a rather basic 4-2-3-1 formation, requiring his wide players to do some more defending. The upside to this is that they can probably expect some more drive from their legions of powerful, box-to-box midfielders, and they can certainly expect some magic along the way from Neymar too.

Croatia, meanwhile, have always been a side that has enjoyed playing attractive football too, and there should be no change for that at this tournament. They have a reasonably well-balanced side, but along with diminutive, dainty ball-players, they also possess some muscle, from defensive midfielder Ognjen Vukojevic to their physical forwards. Croatia play nice soccer, but they know how to be nasty too.

Despite that, this is a team with real problems -- for every role in the team other than ball-playing midfielder, they're desperately short, in some cases only one injury away from having to field a vastly inferior player (striker), or simply not having very good options at all (much of their defense). They'll have to prioritize keeping the ball for as much defensive reasons as attacking ones, and their qualification campaign shows this side is not the strongest. They finished a whole nine points behind Belgium in the group, and managed to get beaten home and away by Scotland. Scotland!

Ordinarily when discussing Brazil's stars we'd be talking about essentially the best attacking players at all of Europe's elite clubs, but Neymar aside, this isn't the case this year. In fact, many of Brazil's players likely to be starting have had poor seasons for their clubs. Neymar was fairly underwhelming for Barcelona, box-to-box midfielder Paulinho has been dire at Tottenham, and playmaker Oscar was in appalling form during the last third of Chelsea's campaign.

There are still World Class players around this team though. Firstly, as we see so often, club form doesn't always have much of an effect on international form, and it'd be no surprise to see the likes of Neymar and Paulinho look a hundred times better than they do for their clubs. Meanwhile, for perhaps the first time, Brazil have full-backs who are not only capable of doing the spectacular, but are also used to operating in four-man defenses where they're expected to contribute more in their own half of the pitch, which makes left back Marcelo and right back Dani Alves very complete players. There's also Thiago Silva of Paris Saint-Germain, probably the classiest defender in the world, and Hulk, who has been in pretty sparkling form of late. This is a more egalitarian Brazil than usual, but it's also arguably a more well-balanced side too.

Luka Modric is the standout name on the squad list, and he's had an excellent season for Real Madrid, winning the Champions League trophy. But he'll also be rubbing shoulders against fellow playmakers Ivan Rakitic, who was also superb in La Liga for Sevilla, and the wonderkid Mateo Kovacic of Inter Milan. That's quite a midfield, particularly when bolstered with wide man Ivan Perisic, a fine creator himself, and the all-action defensive covering of Ognjen Vukojevic. 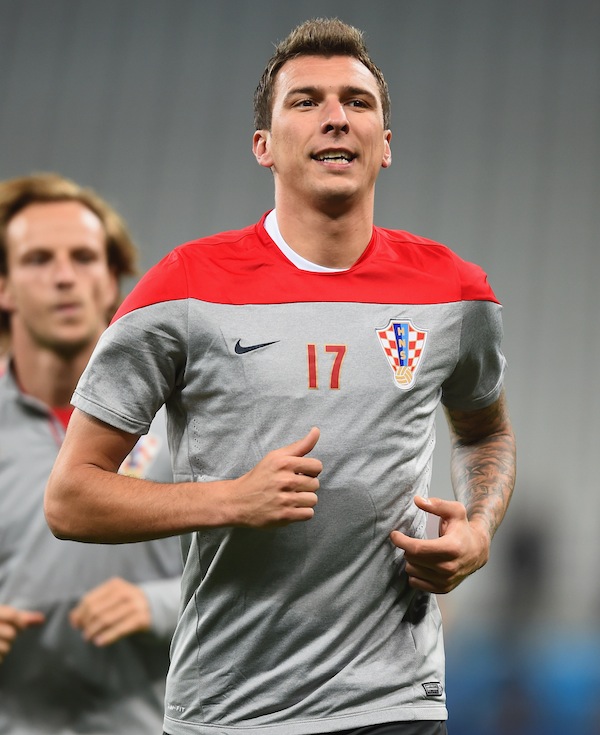 But there's another problem here -- they'll not be providing chances for Mario Mandzukic up front, due to the big striker's suspension for the Brazil game. Instead, they'll be providing them to someone a distinct class below the Bayern Munich forward. Ivica Olic and Nikica Jelavic are the likely replacements, neither of whom is going to strike fear into the heart of the hosts.

In defense, Croatia are slightly short, but they do still have the talents of Dejan Lovren, who enjoyed an excellent debut Premier League season in a fine Southampton side. With an experienced, veteran campaigner for the national team in Darijo Srna at right back, they're not without quality at the back either, and could still be a force to be reckoned with.