Separating Ivory Coast and Japan is nigh-on impossible, with both of these sides strong going forward and weak at the back.

Share All sharing options for: Ivory Coast vs. Japan, 2014 World Cup preview: Expect a triumph of attack over defence

Group C doesn't contain a genuine World Cup favourite, but that means it contains some of the most interesting first round games. One such encounter is Ivory Coast's opener against Japan on Saturday, with both sides facing off with the knowledge that a victory would be a massive step towards progressing into the knockout stages -- especially if Colombia live up to expectations and manage to cruise their way to the top of the group.

Not only are the two sides nigh-on inseparable on paper, but they should also offer an interesting tactical match-up. Ivory Coast are more of a group of individuals, based around the star quality of their midfield driving force Yaya Touré. By contrast, Japan lack a genuinely world class talent, but their outstanding, stereotypically Italian organisation under coach Alberto Zaccheroni means they could cause any team in the tournament problems.

Despite coach Sabri Lamouchi claiming captain Didier Drogba's place in the starting lineup isn't assured, it's likely that the former Chelsea man will still spearhead Les Éléphants' attack in the opening game. Behind him, the attacking midfield trio is cemented, though there are questions over who'll partner Cheick Tioté in the midfield pivot. It could well be the ageing Didier Zokora, though there's the possibility he'll drop in at centre-back and allow Serey Die a place in midfield. Don't expect any surprises elsewhere.

Japan's lineup is even more predictable than the Ivorians', with coach Zaccheroni's starting 11 almost picking itself. The only position up for debate is who'll spearhead the side's attack, though Cerezo Osaka's Yoichiro Kakitani appears to be flavour of the month. If not Kakitani, FC Köln's Yuya Osako could be give the nod, though he failed to make an appearance in qualifying. 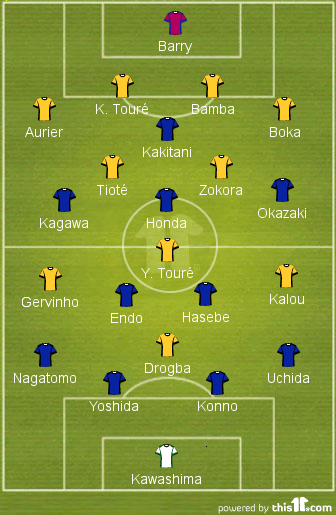 Yaya Touré vs. Japan's midfield pivot - Yaya Touré is central to Les Éléphants' play; playing in an advanced midfield role and tasked with linking a fairly static, defensive midfield pivot with a rather more mobile, lively attack. His power makes him a goal threat himself, though he's just as dangerous when he's threading wingers Salomon Kalou and Gervinho through on goal. Should Japan's deep midfield duo of Yasuhito Endo and Makoto Hasebe manage to keep Touré quiet, they'll be halfway to beating Ivory Coast.

Ivory Coast's wingers vs. Japan's full-backs - You never quite know what you're going to get from Kalou and Gervinho, with both players capable of going from the sublime to the ridiculous in the same passage of play. However, Kalou impressed in qualifying and Gervinho heads to Brazil on the back of an excellent domestic season with AS Roma. If they're both on top form, they'll relish in the space behind Japan's extremely attack-minded full-backs, Atsuto Uchida and Yuto Nagatomo, who are both tasked with providing the Samurai Blue's attacking width.

Ivory Coast's defence vs. Japan's mobile attack - The full-backs are so important to Japan's attacking play because of how narrow their attacking midfield band is when in possession. Keisuke Honda likes to drift in from the left rather than swing a deep cross into the area, while Shinji Okazaki out right is more of a goalscorer than a winger. Thus, Japan attack with a fluidity only really matched by some of the best teams in the tournament, with an emphasis on intricate short passing and excellent close control. With Ivory Coast weak at the back, they're probably going to concede.

Both of these sides are better at attacking than defending, meaning we should see a few goals. While Japan's nimble forwards will surely feast on the shaky Ivorian back line, expect Ivory Coast to try and advantage of any space they find on the break. However, Japan's superior defensive organisation and outstanding high pressing could ultimately prove to be the difference against one of the oldest teams at the World Cup. 2-1 Japan.