Colombia and Greece both rely on a lot of width in their attacking play, so it's out on the flanks that this game will likely be won and lost.

Back when the World Cup draw was made, there's no doubt Colombia coach José Pékerman would've been very content. Set to play Ivory Coast and Japan after opening their campaign against Greece on Saturday, his side are favourites to comfortably top their group en route to reaching the knockout stages -- despite the absence of star striker Radamel Falcao through injury.

However, it might not be quite as easy as they expect.

When Colombia face off against Greece, they should do so with memories of the European Championships a decade ago in mind. Back in 2004 Otto Rehhagel's side stunned the football world by pulling off their first ever major tournament win, and 10 years later, coach Fernando Santos is continuing Rehhagel's legacy of gritty, disciplined, defensive football. Greece will no doubt be stubborn opponents once again.

Colombia are expected to continue playing the fluid 4-4-2 system favoured by Pékerman, with Carlos Bacca and Teófilo Gutiérrez tasked with leading the attack in the absence of Falcao. Pablo Armero and Juan Zúñiga should start at full-back, while James Rodríguez will be given freedom to drift in from the left of midfield. Juan Cuadrado will likely stay tight to the touchline on the right, with Abel Aguilar and Carlos Sánchez playing in central midfield. The more attack-minded midfielder Fredy Guarín will likely have to settle for a spot on the bench.

Greece will almost certainly start in their classic defensive 4-3-3, with Santos' lineup expected to contain no surprises. Konstantinos Mitroglou will spearhead the attack alongside target man Georgios Samaras and winger Dimitris Salpingidis, while Kostas Katsouranis, Giannis Maniatis and Alexandros Tziolis are likely to form a defensive central trio. Adventurous full-backs José Holebas and Vasilis Torosidis will be tasked with providing attacking width. 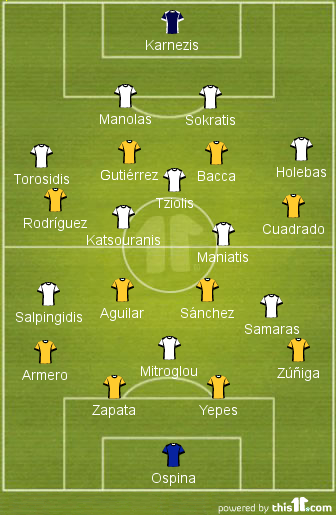 The central battle - In theory, Greece have an advantage in central midfield, as they usually start with three players in this position compared to Colombia's two. With James Rodríguez regularly drifting inside off the left, this advantage is negated when Colombia are in possession, but with Rodríguez likely having to track the forward runs of right-back Vasilis Torosidis when Greece have the ball, it will probably be 3v2 in the centre.

Alas, Greece don't really have anyone capable of taking advantage of this numerical superiority, due to their midfield trio being one of the most defensive in the entire tournament. The closest thing they have to an advanced playmaker, Sotiris Ninis, was omitted from the squad. That means their most advanced central midfielder will probably be the energetic Giannis Maniatis, but he's not likely to cause Colombia too many problems creatively. Thus, what would normally be a key matchup may not really be that important after all.

The wide battle - Instead of in the centre of the pitch, this game will likely be won and lost out wide. Both of these sides rely on their wide players to create chances; Colombia through their two hugely attack-minded full-backs, Pablo Armero and Juan Zúñiga, and pure winger Juan Cuadrado. Greece don't have such an out-and-out wide forward as Cuadrado, making the surging runs from their full-backs José Holebas and Vasilis Torosidis all the more important.

Therefore there is likely to be space out wide on the counter-attack for both sides, and a lot of it. Colombia look a little better set to take advantage of it, with Cuadrado in particular likely to relish the space in behind Greece's defensively suspect left-back Holebas.

Colombia's centre-backs vs. Konstantinos Mitroglou - Colombia are much better going forward than they are at the back, with Mario Yepes now 38 years old and his centre-back partner Cristián Zapata simply not very convincing. Greece striker Konstantinos Mitroglou has had a horrible few months since moving to Fulham from Olympiacos in January, though if he manages to find his best form again, his strength could cause havoc in the Los Cafeteros' back line.

Greece are usually defensively excellent, but if there's one team built to capitalise on their flaws, it's Colombia. Greece's defensive midfield three means Colombia's midfield duo should be pretty unchallenged, while their surging wide players should be able to find plenty of space to work their magic. 2-0 Colombia.