Brazil vs. Croatia: What we should have been expecting all along

Croatia gave Brazil all they could handle. We should have seen it coming.

Share All sharing options for: Brazil vs. Croatia: What we should have been expecting all along

Brazil got the victory the planet was looking for in the first game of the World Cup, defeating Croatia 3-1, but their performance was something well short of spectacular and the win owed more than a little bit to friendly refereeing. Are these really the favourites to win football's premier competition, or should their indifferent display on Thursday result in a downgrade?

Despite the fears around the Selecao, we arguably got the match we should have been expecting -- a narrow, tense and fairly fortunate Brazil win. Croatia are a relatively unknown but excellent side, and they're one of the most difficult matchups imaginable for the hosts, whose main weakness is in central midfield. Brazil's reply to the combination of Ivan Rakitic and Luka Modric -- two of the top midfielders in La Liga -- was, for a good chunk of the first half, Paulinho. That's not a recipe for success.

Brazil's lineup and general movement was predicated on attacking down the flanks. It's an odd choice with Fred as one's main centre forward, but it's an understandable one considering Croatia's fullbacks: Dario Srna on the right is attack-minded and often leaves space behind, while Šime Vrsaljko was being played out of position on the left. Vrsaljko's inclusion appears to have prompted a re-shuffle in Luiz Felipe Scolari's tactics -- he switched around his standard attacking band (which normally features Neymar, Oscar and Hulk from left to right) to something rather more unusual: 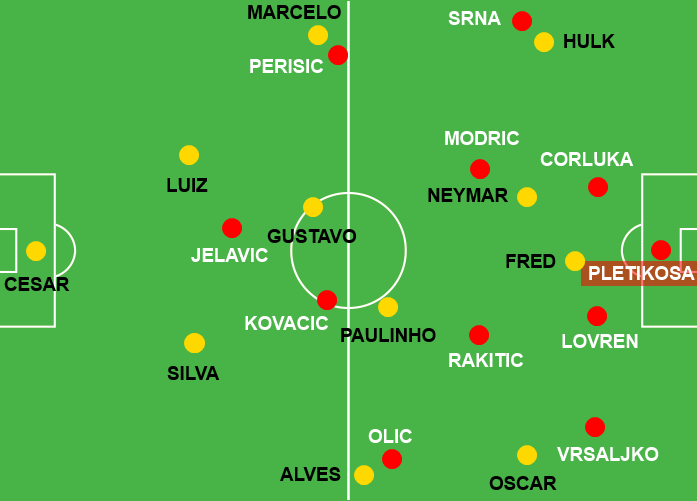 Hulk being moved to the left was probably a response to Vrsaljko's rightfootedness. Hulk's main trick is to cut inside off the right flank and shoot, but pulling that here would have moved him onto Vrsaljko's strong side, and so he was shuttled off to the left inside. Oscar, normally a no. 10 but able to play on the wing, was matched up against Vrsaljko, while Neymar flitted around behind the striker.

Croatia, without the suspended Mario Mandzukic, were left with Nikica Jelavic up front and Ivica Olic wide left; the latter enjoyed a good opening spell before falling apart while the former contributed very little of note. Having the Bayern Munich forward available would probably have allowed Croatia to better capitalise on their early dominance -- indeed, but for Marcelo finding himself in the wrong place at the wrong time Jelavic's inclusion would have cost Niko Kovač's side the opening goal.

That dominance -- and by extension, the goal -- was almost entirely the result of Brazil's basic structural weaknesses, exacerbated by Scolari's lineup decisions. The Selecao normally favour attacking down the wing, using Dani Alves and Marcelo to bomb forward before the wide men take over to create. But here they were forced into doing so even more than usual, and once they'd gotten into wide positions their standard method of exploiting them (Neymar cutting inside from the left and Hulk from the right) was more difficult because Neymar was starting centrally and Hulk was on his wrong flank.

Even the buildup play was broken. Luis Gustavo tends to drop between the centre backs in the early stages of buildup play, allowing them to push wide and thus giving Marcelo and Alves free rein to scoot a little higher up the pitch. But without Oscar in the No. 10 role to support the midfield, that move -- and it was repeated several times in the opening half hour -- led to Paulinho's complete isolation in the centre, unable to offer for the ball. Brazil weren't just trying to go wide, they simply could not get anywhere through the middle. Playing against the Modric-Rakitic-Kovačić triangle on one's own would be difficult enough for the likes of Yaya Touré, and it was simply beyond Paulinho's meagre abilities.

In case you're just getting into the game.

There are many ways of coming up with predictions for the World Cup, so let's go down the "rigorous mathematical model" route. There might be a surprise or two along the way.

Moreover, Brazil's concentration on wide areas caused them two key defensive problems. The first is obvious, and would have been obvious even without watching the game to anyone familiar with the players involved. Marcelo and Alves (particularly Alves) are too often caught out of position, leaving enormous amounts of space to attack immediately behind them. But the second is more subtle: Brazil's midfield positioning on the attack and Neymar's neglect for his pressing duties meant that one of Modric and Rakitic was always free to receive possession immediately after Croatia won the ball back.

These are two of the best deep-lying playmakers in the game, and the time and space they had on the ball in those situations early on was utterly unforgivable. Alves was caught out of position for the opener, but the greater sin was allowing Rakitic a free run straight into the midfield zone.

What should Brazil have been doing? Hitting them harder. Croatia's midfield is excellent, but it also has an unfortunate weakness in that Modric and Rakitic are too similar. Both are very good defensively for pass-first midfielders, but the pairing makes for a fairly soft centre off the ball. They can be challenged by a team willing to punch through the middle, which is exactly what Oscar did for Neymar's first goal.

The Chelsea man was probably Brazil's most influential player -- he grabbed the assist on the equaliser, played the ball that led to Fred's penalty and grabbed the third in stoppage time -- but he should have been better used. He's one of the hardest working central attacking players in the game, and had he been deployed in his usual role Brazil would have been better able to challenge Modric and Rakitic during all phases of play. It's likely that Scolari knows this, of course, but with Oscar repeatedly roasting Vrsaljko on the right and thus serving as Brazil's main creative force, it would have been difficult to move him to the centre mid-game.

The hosts got better at closing the duo down (and exploiting their lack of defensive ability) as the game went on, but their early neglect of what should have been an obvious tactical step meant that they had to be rescued late on.

All three Brazil goals could and should have been stopped by Stipe Pletikosa, but the bigger talking point is the referee, who gifted the Selecao the game-winning penalty before rather dubiously denying Croatia a late equaliser. But frankly, the fact that Brazil had help from the officials shouldn't change our opinion of their ability to win the World Cup: home field advantage in football is in large part due to officials favouring the home side, and nowhere is that more true than in international games. Brazil should be expected to be getting beneficial calls throughout the tournament, although they'll rarely be more blatant than the Lovren-Fred penalty incident.

What did we learn from the opener? In truth, not much: Brazil's midfield is wobbly, Croatia's is quite good, the referees will be giving the home side a hand ... we were already expecting something of this nature (or should have been). Perhaps the only surprise was Oscar's excellent performance -- he's not been at his best for several months, and a return to form in the World Cup bodes very well indeed for the Selecao.