Diego Forlan and Diego Lugano were two of the huge stars of the last World Cup. Now they're old. Can an injured Luis Suarez and Diego Godin carry an older Uruguay team against Costa Rica?

While Group G has been dubbed the "Group of Death" due to the strength of all four teams, Group D might be the group with the best balanced top three. Uruguay, England and Italy all have the talent to make a surprise run to a semifinal, but they're all flawed teams, and all will struggle to get out of a group with the other two. If Uruguay are going to have a chance to advance, they need a win in the opener against Costa Rica (Saturday, 3 p.m. ET, ABC).

Uruguay set up their team to accommodate their three best players -- Diego Forlan, Luis Suarez and Edinson Cavani -- in 2010, but Forlan is nothing more than a locker room leader and backup at this World Cup, while Uruguay's wingbacks aren't in the same form they once were. That means a switch to two strikers and a back four, which might play right into the hands of Costa Rica.

The Ticos switched between formations during qualifying to suit the situation, and their back three setup will be perfect for this game. It'll be very difficult to slow down Cavani and Suarez -- again, if Suarez plays -- but playing with a spare man at the back should give them a chance.

The big news ahead of this game is the injured knee of Luis Suarez. He had surgery on his left meniscus in May, and he's been fighting to get fit ever since. Uruguay manager Oscar Tabarez and Suarez have been sending out mixed signals about his fitness, with Suarez claiming he won't be fit and Tabarez refusing to comment. He seems unlikely to play, but those who have followed Suarez's career assume that he'll fight to start as long as he can walk.

Costa Rica got off to a bit of an unlucky start in this World Cup with defenders Michael Umaña and Junior Diaz getting ill, but they're expected to be available. Questions linger about what formation the Ticos will play and who will play up top, but expect to see three central defenders and Joel Campbell operating as a striker.

We're banking on Suarez's passion winning out over sense. 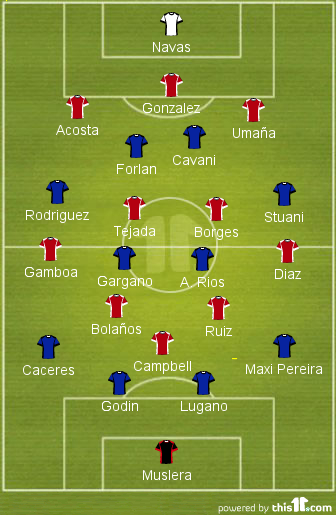 Keylor Navas vs. a barrage - As the goalkeeper for La Liga side Levante, who has some of the lowest revenues in the division, Navas is used to facing a lot of shots. And his brilliant play in goal for that team has kept them in La Liga comfortably. Because of Navas, they've been a mid-table finisher, and without him, they'd probably be in the drop zone.

He'll need to replicate his club heroics for his country on Saturday. Even if Suarez isn't fit, Forlan's old and the back three in front of him is a decent matchup for Uruguay, he's going to face a lot of shots on target. He'll probably have to make double-digit saves -- and three or four world class ones -- to guide his team to a positive result.

Celso Borges vs. Edinson Cavani - Yeltsin Tejada is the more defensive midfielder in the Costa Rica center, but Borges will have more work to do and harder decisions to make as the more attacking midfielder. He's got a knack for scoring off forward runs and will be the man orchestrating the Costa Rica counter, but Cavani will be the beneficiary if he gets caught out of position. He'll have to make a point of staying disciplined to keep Uruguay's deeper striker from getting the ball and turning up the pitch easily on a regular basis.

Diego Lugano vs. Joel Campbell - Campbell is one of the world's brightest young strikers and Lugano is far past his prime. He was poor at PSG a couple of years ago, moved to West Bromwich Albion when he couldn't get a game anymore, then struggled even worse there. If he starts for Uruguay, he'll be a liability on Costa Rica counters, and Campbell will be ready to take advantage.

Between Costa Rica's back three, Suarez's injury and Campbell's ability to take advantage of Lugano's lack of speed, there's some serious upset potential here. But Costa Rica's defense probably isn't talented or disciplined enough to keep Uruguay off the scoreboard, even if Suarez doesn't play or looks like a shell of himself. We're predicting a surprisingly close shootout and a candidate for game of the tournament. 3-2 Uruguay.