Mexico vs. Cameroon: Indomitable Lions outclassed in every way

Share All sharing options for: Mexico vs. Cameroon: Indomitable Lions outclassed in every way

Mexico overpowered the combined forces of Cameroon and the match officials to start off their World Cup campaign with a 1-0 win. It should, however, have been far more one-sided. The Indomitable Lions are widely considered the weakest African side in the tournament, and if not for two incorrect offside calls and some freakish misses, El Tri's margin of victory would have been much greater. 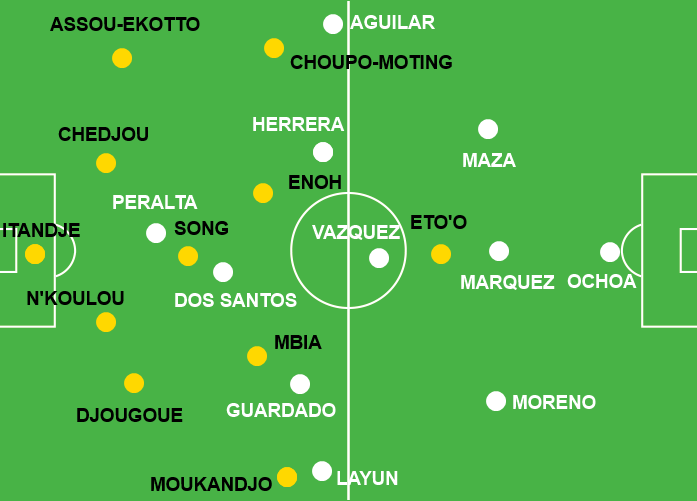 Neither team made any major tactical changes, which makes a certain degree of sense -- Cameroon's depth is questionable at best, and Mexico coach Miguel Herrera would have felt his standard starting lineup was more than enough to deal with the minnows. Although in general the 4-3-3 has an edge over 3-5-2 -- with the latter's three centre backs against the 4-3-3's lone centre forward, the team playing 3-5-2 has an unengaged defender staying deep and therefore is outnumbered elsewhere on the pitch for no advantage -- in practice Cameroon couldn't take advantage, unable to hold possession against El Tri.

Mexico's 3-5-2 is slightly unusual in that the left central midfielder, Andres Guardado, is by trade a wide player and has a habit of drifting to the left flank when fielded in a central role. Guardado's tendencies means that left wingback Miguel Layún receives far more support than he would in a more traditional 3-5-2, which in turn makes El Tri far more dangerous down the left than their formation alone might suggest.

Layún/Guardado vs. the Cameroon right

With the left-sided overload a staple in Mexico's attack, one would have expected Cameroon right back Allan Nyom to play a key defensive role. But Nyom never appeared*, and instead the Indomitable Lions found themselves relying on the untested figure of Cédric Djeugoue. Twenty-one years old and untested at a serious level, Djeugoue was tasked with shutting down the Layún/Guardado axis. Predictably, that didn't go very well.

*It seems likely at this point that there was an unreported late injury.

Cameroon's defensive line broke down on the left no fewer than four times in the opening ten minutes. Djeugoue, confronted with Guardado coming at him from inside while Layún overlapped, ended up covering neither, repeatedly allowing El Tri to thread passes in behind. Djeugoue improved over the course of the half, and the chances slowly dried up, but that he allowed Mexico so many prime opportunities to wriggle behind the line was little short of appalling, and Volker Finke yanked the hapless defender for Dany Nounkeu at halftime.

With Cameroon so porous, why were Mexico not out of sight by halftime? Obviously, dubious officiating had an impact --  Giovani dos Santos had two perfectly legitimate goals disallowed for offside -- but the real story should be how wasteful Mexico's players were when they were well on top.

Layún was particularly profligate. After working several great opportunities behind Djeugou, the wingback contrived to waste every single one, taking poor decisions and slinging in crosses that one might charitably describe as "utterly useless," In his defence, however, he was set up to fail: The left-sided overload that Mexico like to use suffers from the key fact that Layún, a right back at club level, has real difficulties crossing on his weak side. El Tri, then, are in excellent position to blow defences open down the left side, but they can't take full advantage of the situation that then develops.

But it wasn't just Layún. Mexico's inability to make the most of Cameroon's myriad defensive miscues -- although they pushed more players into the back line and replaced their right back at the half, the Indomitable Lions remained utterly disorganised -- might end up coming back to haunt them. There's a good chance that second place in Group A comes down to goal differential, and a one-goal margin against the group's weakest team isn't great news.

Rafa Marquez denied Héctor Moreno a sure goal with a ill-advised header, Javier Hernandez skied a shot over an empty net in injury time, Oribe Peralta missed a one-on-one early in the second half and even the goal came after dos Santos shot straight at Charles Itandje from a promising position, only for the for PAOK Salonika keeper to spill straight to Peralta for an empty-netter.

Yes, dos Santos did score twice only to see his brace wiped out by officiating errors, but Mexico had plenty of chances to pad the score, and they should have taken them.

El Tri wobbly at the back

Cameroon had plenty of trouble at the back, but they showed enough quality going forward to seriously trouble Mexico, who were lucky to keep a clean sheet. Samuel Eto'o uncharacteristically blasted wide from a cutback in the first half, Maxim Choupo-Moting was unlucky not to get a penalty minutes later and an excellent save from Memo Ochoa kept El Tri ahead as the game died down.

Cameroon don't have a solid back line, but they are dangerous when given time on the ball -- the attacking trio of Eto'o, Choupo-Moting and Moukandjo isn't elite, but it's a step up from the rest of the squad -- and Mexico didn't do enough to close them down. Granted, conceding a goal or two wouldn't have been a huge deal in a world where offside was called correctly, but that Cameroon's crew was able to threaten El Tri doesn't bode well for Mexico's ability to see off teams that are able to keep possession against them.