Argentina vs. Bosnia and Herzegovina, 2014 World Cup preview: How long will the Dragons' defence hold out?

Argentina should get their World Cup campaign off to a winning start, as they clash with debutants Bosnia and Herzegovina.

Share All sharing options for: Argentina vs. Bosnia and Herzegovina, 2014 World Cup preview: How long will the Dragons' defence hold out?

Things haven't quite clicked for Argentina at recent major tournaments, despite their incredible wealth of attacking talent. Once again at this World Cup they arrive with a potent front line but a shaky defence and goalkeeper, and La Albiceleste may well have to rely on outscoring opponents rather than grinding out narrow victories and clean sheets.

Fortunately, their first opponent in the group stages is Bosnia and Herzegovina, who have one of the weakest defences in the entire tournament; so much so that coach Safet Sušić has recently brought young centre-back Muhamed Bešić in to anchor the midfield. Unfortunately for Bosnia, that's probably not going to be enough to keep Argentina at bay, and their Word Cup debut may get messy.

Argentina coach Alejandro Sabella looks set to continue using his strange 4-2-3-1/4-3-3 hybrid, with Javier Mascherano anchoring the midfield alongside Fernando Gago, with Ángel di María given the freedom to drift forward from his central position to link with the attacking trio of Gonzalo Higuaín, Lionel Messi and Sergio Agüero. Despite a string of blunders in qualifying, Sergio Romero is Argentina's favoured option in goal, with Pablo Zabaleta, Federico Fernández, Ezequiel Garay and Marcos Rojo forming an unconvincing back four.

Meanwhile Bosnia coach Sušić is likely to stick with the 4-2-3-1 to which he's recently shifted, with the inexperienced Bešić sitting alongside the energetic deep playmaker Haris Medunjanin in the midfield pivot. Senad Lulić and Izet Hajrović should provide their width, with star attacking midfielder Miralem Pjanić playing off lone striker Edin Džeko. Alternatively, Pjanić could sit alongside Bešić deeper in midfield and allow Zvjezdan Misimović slot into the attacking midfield role, though that now looks less likely. 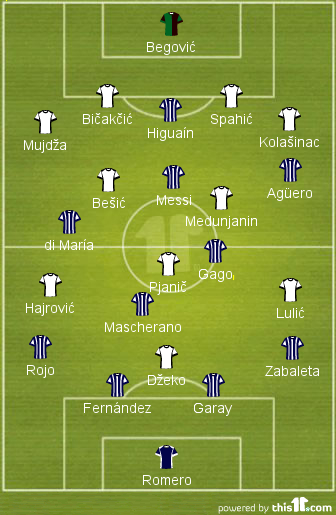 Argentina's attack vs. Asmir Begović - Bosnia's defence is poor, though in Stoke City's Asmir Begović they have one of the best goalkeepers at the World Cup. He's probably going to come under constant fire, so if Bosna are to stand any chance of taking an unlikely point form this match, they'll need him to be at his very best.

Argentina's defence vs. Bosnia's deadly duo - There's no doubt that the two real stars of the Bosnia team are playmaker Miralem Pjanić and striker Edin Džeko. They both head into the World Cup on the back of excellent domestic seasons, and will almost certainly be the architects of any joy the Dragons have in Brazil.

It'll likely be up to Mascherano to stop Pjanić sprinkling his magic from midfield, while centre-backs Federico Fernández and Ezequiel Garay will be given the unenviable task of coping with the powerful Džeko. If he receives the ball in the box, there's a good chance it'll end up in the back of the net.

Ángel di María vs. Muhamed Bešić - Perhaps the most important player in the entire Argentina team is Ángel di María, who's tasked with linking the midfield and attack through the sort of shuttling runs we've seen since Carlo Ancelotti moved him central at Real Madrid this season. Should Bosnia's holding midfielder, Muhamed Bešić, manage to keep him quiet, they'll cut off at least some of the supply to Messi, Agüero and Higuaín.

Bosnia have two or three genuinely excellent players in their lineup, though alas none of them are defenders. That means they'll probably concede a few, though could capitalise on Argentina's own defensive vulnerabilities to grab a consolation goal. 3-1 Argentina.