Switzerland will be looking to make the most of a hugely talented group of players, but Ecuador can cause them severe problems if they aren't careful in their opening game.

Share All sharing options for: Switzerland vs. Ecuador, 2014 World Cup preview: An intriguing battle of wingers

Switzerland's last World Cup got off to a pretty good start - they beat the eventual Champions, Spain. This time, they have a much easier opponent to start things off in Ecuador, a side who can be dangerous but are severely limited.

This is something of a golden generation for Switzerland, who have a lot of young, exciting players coming into their team, and a pretty well-balanced side at that. The likes of Xherdan Shaqiri can attack knowing that solid defenders like Fabian Schar are behind them, while the likes of Gokhan Inler and Granit Xhaka run the midfield.

Ecuador, meanwhile, are a team heavily focused on pacy wingers attacking the flanks. Antonio Valencia has been in poor form for Manchester United for a long time now, but he always seems to up his game for the national team, and Felipe Caicedo provides the perfect foil for this kind of play. It's not a great team, but their gameplan is simple and can be effective.

Switzerland have no injury problems, and the only real questions are whether Schar will start in central defence to partner Steve von Bergen, and if Blerim Dzemaili will miss out in midfield to the due of Inler and Xhaka. Mostly, the lineup seems a fairly predictable one otherwise.

Ecuador, meanwhile, have a worry in the fitness of Christian Noboa, who it is claimed will be fit to start but is still a doubt at this stage. Carlos Gruez, the talented youngster, is likely to start in his stead should the more experienced midfielder miss out. 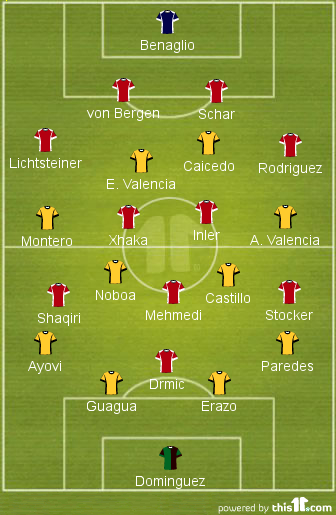 Switzerland are a much better team than Ecuador on paper, but if they have a weakness, it's their fullbacks. And that's excellent news for Ecuador, who love to attack down the flanks with tricky wingers that take on their opponents directly. Stephan Lichtsteiner has a lot of experience, but is often more used to functioning as a wing-back, and Montero and Valencia could give him and Rodriguez a torrid time. Ecuador's 4-4-2 also means that neither centre-back will be able to come over and bail their full-back out, so a disciplined defensive job from Switzerland's wingers to track back will be essential to their hopes of victory.

Both midfields here are of an energetic, solid variety, but Switzerland have the edge, and particularly if Noboa is absent or unfit, Ecuador need to avoid being trampled into the ground by the powerful Swiss engine room. With a 4-4-2, Ecuador will already be struggling to control the centre, and while it won't be essential to their gameplan, they simply can't allow the Swiss to overpower them at will. It'll likely be a mostly defensive task assigned to their two central men for this game.

This is a very unpredictable game - Switzerland are a very good side but they're facing a team that, while inferior, can exploit all their weaknesses. Add into the bargain that both sides can be quite temperamental and unpredictable, and it's more or less anyone's guess, but quality usually does tell on the biggest stage of all. 2-1 to Switzerland.