The 50-year-old physiotherapist collapsed with an apparent ankle injury after jumping off the England bench to celebrate Daniel Sturridge's equalizer.

England physio Gary Lewin has been stretched off during he first half of the Three Lions' match against Italy. Yep, the physio. Apparently, he landed awkwardly on his ankle while celebrating Daniel Sturridge's goal. 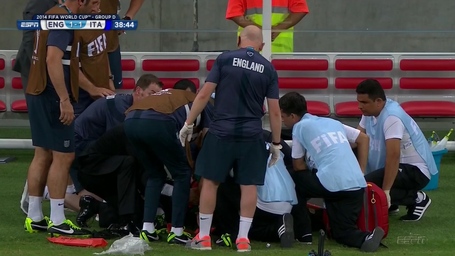 It took a few minutes to figure out exactly what had happened, and who had be injured. At first it appeared that a camera operator might have been injured, but once the crowd surrounding the stretcher cleared, it became clear that Lewin was the individual who was injured. 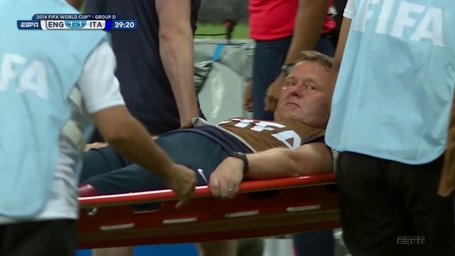 Gary Lewin flew off the bench along with the rest of the England staff. Immediately collapsed and starting banging the ground.

Lewin spent 22 years working as the first team physiotherapist for Arsenal before becoming the Head of Physiotherapy for the England National Team in 2008. Hopefully it's not a serious injury for Lewin and he'll be able to continue his work going forward during the tournament.