England vs. Italy: Three Lions so fun they forgot to have a plan

Congratulations to England for actually trying to play football. Too bad they forgot to stop Italy from doing anything.

Share All sharing options for: England vs. Italy: Three Lions so fun they forgot to have a plan

With Uruguay stumbling in the opening match of Group D, the clash between England and Italy could easily have lost much of its bite. At the start of play in Manaus on Saturday, both teams should have been more than happy with a draw, which would have given each a precious one-point advantage over the South Americans.

Given the standings, the punishing climate amd the previous encounter between these two sides (if you don't remember it, nobody will blame you: a dour 0-0 draw in Euro 2012's quarterfinals; Italy won on penalties), one might have expected something akin to a gentleman's draw, with neither side trying too hard and saving up energy for the more important tests ahead of them. But the spirit of 2014 didn't allow that to happen, treating us instead to a thriller of a match which the Azzurri edged out 2-1 through Mario Balotelli. 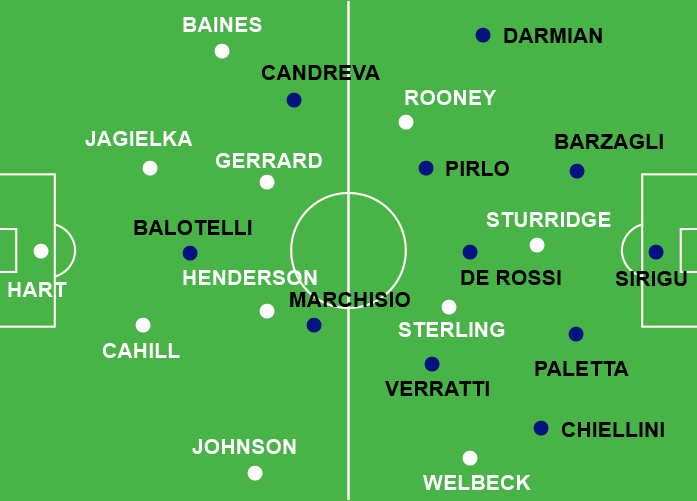 Italy's changes to their preferred XI were forced on them by injury: Mattia De Sciglio's absence meant a reshuffle in the back line, and a lack of Gianluigi Buffon meant that Salvatore Sirigu ended up in goal. Although the latter was obviously more newsworthy, the former was more problematic on the pitch -- Giorgio Chiellini is many things, but no left back, and Gabriel Paletta is nowhere near the level Italy normally enjoys from its centre backs.

Roy Hodgson, meanwhile, opted to shift Wayne Rooney away from his usual role behind the striker, moving him to the left and deploying 19-year-old Raheem Sterling in his place. Danny Welbeck moved out to the right to accommodate the switch, which meant that Adam Lallana was benched.

The Azzurri's limitations were obvious from the moment their lineup was released. Italy were going to be extraordinarily vulnerable down their left side, where they could neither realistically attack nor defend very well. Play would have to come down the right, through the axis of Matteo Darmian and Antonio Candreva, or through the middle, marshaled by the static playmaking duo of Andrea Pirlo and Marco Verratti.

The standard response from most managers would have been to reinforce the England left, have Pirlo man-marked out of the game and to push the attack through the right flank, where Chiellini and Paletta were constantly vulnerable. Instead, Hodgson allowed Rooney to roam off the left flank,  made no effort to curtail Leighton Baines' forward runs and let both Pirlo and Verratti have as much time on the ball as they liked. The Three Lions' defensive setup made no attempt to disrupt Italy's primary methods of attack, which would have severe consequences later.

Italy on the defence

While England had no solid plan for dealing with Italy's attacking game, the same was true at the other end of the pitch. Cesare Prandelli's current back line is more than a little ponderous and therefore vulnerable on the break, and his midfield system seems shaped to help deal with that. Pirlo, Verratti and Daniele De Rossi all sat very deep, and although the former two are defensively limited, they're also effective at attacking from deep on the pitch, reducing the number of bodies that Italy commit forward and so limiting the space opposing sides have to counterattack into.

In practice, it didn't work as well, and the flanks looked continually vulnerable. The left was particularly weak -- Chiellini was regularly isolated against the likes of Sterling and Welbeck, but England's goal came from the left, when Sterling released Wayne Rooney and the Manchester United man crossed for Sturridge to tuck in.

England punished for their tactical naiveté

That England scored and looked both threatening and ... dare we say it? ... fun is in many ways a credit to Roy Hodgson, who seems to have realised that his side cannot stick with the old ways without constant national embarrassment. But his move towards a more expansive system has hardly been a smooth one, and here his England side were rather thoroughly punished for their tactical naiveté.

Pirlo was able to punish England, flimsy through the centre with a midfield pairing of Jordan Henderson and Steven Gerrard, but the star of the show was Antonio Candreva, who mauled the unfortunate Leighton Baines repeatedly and whose cross for Balotelli won the match. Baines is not a world-class defensive player by any means (and Ashley Cole, dropped by Hodgson in the buildup to the World Cup, would surely have been a better option here), but his task was rendered impossible thanks to the total lack of help he received from the forward players.

It's tempting to blame that entirely on Rooney, and in fairness he was diabolically poor at tracking Darmian for the entirety of the first half, but he was shifted over to the right at halftime and Danny Welbeck failed to support Baines either. Hodgson obviously realised that his left-back was getting destroyed, but he lacked the foresight to anticipate it and the ability to rectify the problem.

England's substitutions were also particularly weird. Chasing the game, Hodgson opted to swap Welbeck out for Ross Barkley, Henderson for Jack Wilshere and finally Sturridge for Adam Lallana. All three substitutes are helpful players, but the substitutions themselves made little sense -- Hodgson, whose team needed goals, was removing his most dangerous players while leaning on the likes of Rooney and Gerrard.

England were narrowly outplayed and deserved to lose, but they did well enough in very difficult conditions that their tactical mistakes were particularly galling. Italy could have been beaten had their attacking game been squeezed a little more, but the Three Lions completely failed to counter some very specific and obvious threats, then resorted to hard work and big-heartedness after going behind. The outcome was obvious.

For Italy, a win against what is probably the second best team in the group is important in setting themselves up for the knockout rounds, but Prandelli still has plenty of work to do. His defence in particular is a major worry, with the entire left side little short of disastrous for much of the opener. Chiellini offers little going forward, and asking him to compromises his ability to defend. Meanwhile, the only question Gabriel Paletta answers is 'who should definitely not be playing for Italy right now?'

It was a good result, but against better (or, perhaps, more organised) sides than England, the Azzurri will have their hands full.