How Costa Rica upset Uruguay and stunned the World Cup

Share All sharing options for: How Costa Rica upset Uruguay and stunned the World Cup

64 years after humiliating Brazil at the Maracana, Uruguay played a World Cup match on Brazilian soil once more -- and got a humiliation of their own at the hands of Costa Rica. How did the Ticos pull off their 3-1 win against a team that made the semifinals in 2010 and currently hold the Copa America? The answer turns out to be fairly straightforward. 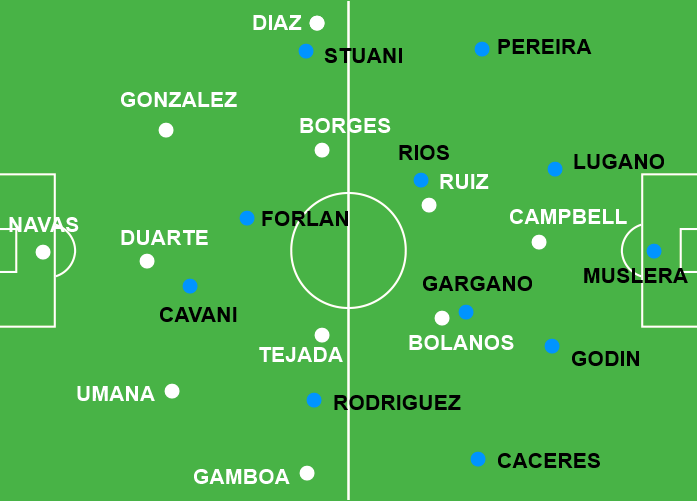 It's obviously possible to overstate the way in which team shapes interact on paper, and any analysis relying on formation notation runs the risk of being simplistic to an absurd degree. Still, there's a reason 3-5-2 and its varients are often considered a direct counter to the sort of 4-4-2 Uruguay field: because it works.

Uruguay's strength is almost entirely concentrated in its strike force, shutting Edinson Cavani and Diego Forlán down was therefore tremendously important for this Costa Rica team. And a three-man back line is perfect for doing so -- it means that even if one defender is beaten, there's always a spare to back them up. Yes, the back three meant that the Ticos conceded a man somewhere else on the pitch, but with Uruguay relying on Cavani to solve all of their attacking problems, that tradeoff was completely acceptable, and the combination of Giancarlo González, Óscar Duarte, Michael Umaña did their job very well.

It's not as though Costa Rica changed their shape specifically to deal with the threat posed by Uruguay's strikers -- coach Jorge Luis Pinto used a three-man back line throughout qualifying -- but as a result of their favoured formation they were perfectly poised to neutralise them.

Over the course of the match, the only real joy Uruguay found was on set pieces. With three first-half free kicks, the favourites created three big chances: Diego Godin had a goal ruled out for offside following a Cavani flick, Cavani shanked a volley wide after an awful attempted clearance and Diego Lugano won the penalty that led to their only goal. Otherwise, the attacking threat posed by the 2010 semifinalists was totally shut down.

The Ticos on the attack

Costa Rica's defensive work only explains half of what happened, however. They did allow a goal, and fairly early on at that, so they had to find a way to break down Uruguay's defence in order to get anything from the game. In truth they found that fairly easy, and although that says something about the Ticos' virtues going forward (Joel Campbell, in particular, was excellent) it says rather more about the fragility of this Uruguay side.

Although Uruguay can boast Atletico Madrid centre half Diego Godin at the back, those around him are markedly less impressive. Lugano is an inspirational figure but no longer a top level footballer, while ahead of them the likes of Walter Gargano and Arévalo Rios possess neither speed nor strength in midfield (although the latter has the admirable ability to apply an incredible amount of concentrated violence to opposition players when he feels like it).

Uruguay, in short, are very vulnerable at the back, and as soon as Costa Rica committed to the attack they wilted. The Ticos didn't exploit a tactical flaw when they went forward so much as they made the most of the fact that the players facing them weren't very good. That Uruguay's defence was eviscerated so thoroughly by what is, on paper., the weakest team in the group will be a major worry for Óscar Tabárez.

The elephant in the room here is the absence of Uruguay's all-time top scorer Luis Suárez. Sidelined by a knee injury sustained in the final match of Liverpool's Premier League campaign, the striker's availability had been the matter of much debate in the leadup to the game, and although he made the bench for the opener, he apparently wasn't fit enough for Tabárez to risk actually using him in the match.

Would a Suárez-Cavani strike pairing have proved more difficult for Costa Rica's back line to deal with? Almost certainly. Suárez is a world-class player, able to ghost past defenders and shoot from almost everywhere, and although Forlán lit up the last World Cup and was dangerous on set pieces, he's clearly well past his prime now -- Suárez clearly represents a major upgrade.

He would also have made Cavani better. The Paris Saint-Germain man is an excellent lone striker, but he's never done well as a team's sole offensive threat. When the opposition uses its defensive resources to shut him down, he'll invariably have a quiet game, and the key to making the most of him is to ensure that there are others capable of scaring the defence and drawing players away from Cavani. Suárez obviously would have done that.

A key absence in Uruguay's attack as well as a shaky defence were major elements in this upset, but that doesn't take anything away from Costa Rica's achievements. They drew their opponents out perfectly with some strong defending, didn't let their heads drop after going down, and exploited every weakness they saw en route to a very impressive 3-1 win. With England losing to Italy in Group D's late game, they now have a real chance of getting out of the group stages, which would be an incredible feat for the CONCACAF side.