Algeria may be one of the most underrated sides heading into this World Cup, and could cause an upset against Belgium in their first group game.

Belgium head into this World Cup with great expectation on their shoulders. Their golden generation has delivered some of the finest players around, from goalkeeper Thibaut Courtois to striker Romelu Lukaku and nearly everywhere in between. However, they'll have to perform as a team rather than simply a collection of exceptional individuals if they're to live up to the hype in Brazil. And that includes getting over a tricky first hurdle.

They meet Algeria in their opening group game, in what should be a much more difficult match than you may expect. Les Fennecs have flown under the radar heading into this tournament, and expectations outside of Algeria are of another fairly dour group stage exit. But make no mistake, Vahid Halilhodžić has a team with plenty of young talent too. Underestimate them at your peril.

There shouldn't be any surprises in Belgium's lineup, which means Courtois will start in goal, ahead of makeshift full-backs Toby Alderweireld and Jan Vertonghen, and centre-back pairing Thomas Vermaelen and Vincent Kompany -- though Vertonghen could, in theory, swap positions with Vermaelen. Despite his domestic woes Marouane Fellaini will likely start alongside Axel Witsel in midfield, with Hazard, Kevin De Bruyne and Kevin Mirallas playing off Romelu Lukaku.

In contrast, Algeria's lineup is way more difficult to predict. Djamel Mesbah could start ahead of Faouzi Ghoulam at left-back, while Liassine Cadamuro-Bentaïba is pushing for a starting centre-back slot over one of Madjid Bougherra or Essaïd Belkalem. Depending on whether Halilhodžić goes 4-2-3-1 or 4-3-3, attacking midfielder Yacine Brahimi could be dropped for Nabil Bentaleb, while there's more intense competition up front. Riyad Mahrez and Nabil Ghilas could both start, but face strong competition from Sofiane Feghouli, El Arbi Hillel Soudani and Islam Slimani. 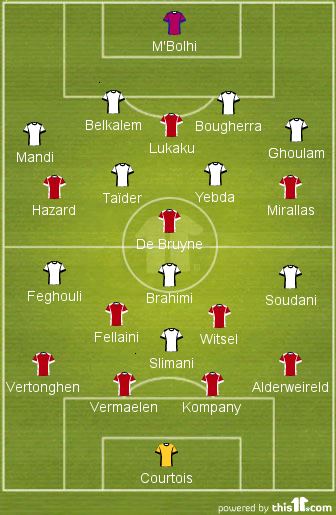 Belgium's full-backs vs. Algeria's wingers - The football gods have given Belgium a wonderful selection of talent across the field ... apart from in those two gaping holes either side of the centre-backs. Yep, the Red Devils head into the World Cup without any natural full-backs; instead Alderweireld and Vertonghen will likely fill in. That makes Algeria's fierce threat from wide even more worrying, with their wingers and full-backs all very talented and attack-minded.

Belgium's midfield pivot vs. Algeria's central threat - Though Witsel is an excellent defensive midfielder, Fellaini, well, isn't. His positional play is poor, and he's had a disappointing season at Manchester United after being deployed uncomfortably deep in midfield. With Algeria possessing several players who love to drift into the central space between opposition midfielders and defenders -- especially Brahimi either off the left or from deeper in midfield, and Feghouli off the right -- Fellaini will have to be uncharacteristically vigilant.

Kevin De Bruyne vs. Hassan Yebda - Belgium are excellent everywhere across their front four, but perhaps their most important player is central attacking midfielder De Bruyne. Given that they're lacking in full-backs to carry the ball up to the attackers, or a deep-lying playmaker to spray quick diagonals, the onus usually falls on De Bruyne to act as a fulcrum; servicing Hazard, Mirallas and Lukaku ahead of him. If Algeria's most defensive player -- probably Yebda -- can cut off the supply to De Bruyne, they'll disrupt the Red Devils' attacking flow.

Algeria are certainly capable of causing an upset here, and it'd be a great surprise if they rolled over and allowed Belgium to rack up a big win. However, the Red Devils do have that little more individual quality, and that may well be just enough to see them through. 2-1 Belgium.