The wide areas will likely be key as Brazil take on Mexico, and the Seleção should have the upper hand.

Share All sharing options for: Brazil vs. Mexico, 2014 World Cup preview: Seleção should dominate out wide

It's perhaps understandable that World Cup hosts Brazil looked a little nervy in their opener against Croatia, though they still recorded a victory and poster boy Neymar a brace to pacify the home fans. However, they'll certainly hope to be a little more composed in their second Group A game against Mexico on Tuesday, and set themselves up for the knockout stages.

But, if Mexico's opening game is anything to go by, they shouldn't make life too easy for Luiz Felipe Scolari's side. They completely dominated Cameroon, and had two goals incorrectly chalked off by the officials before Oribe Peralta's was finally allowed to stand in the second half. With their confidence high, El Tri may well fancy their chances.

Performance was dodgy yet encouraging

While they struggled at times against a spirited and unfortunate Croatia, Brazil's 3-1 victory demonstrated a few significant positives for Luiz Felipe Scolari's side.

Performance was dodgy yet encouraging

Brazil's personnel was as expected in their opening game, albeit not quite in the regular order. Hulk started on the left instead of his usual right, with Neymar shifted into the centre of the attacking midfield band and Oscar in Hulk's normal position. It didn't quite work out, leaving the Seleção looking unusually disjointed and struggling to link their midfield and attack. It's likely Scolari will make amends and revert to his more regular shape here.

Mexico, however, aren't expected to make any changes from the team that downed Cameroon in their first match. That means coach Miguel Herrera should stick with his preferred back three, with Miguel Layún and Paul Aguilar tasked with providing width as wing-backs. Despite normally playing wide, Andrés Guardado will likely keep his position in central midfield, while Giovani dos Santos will operate in support of Oribe Peralta. 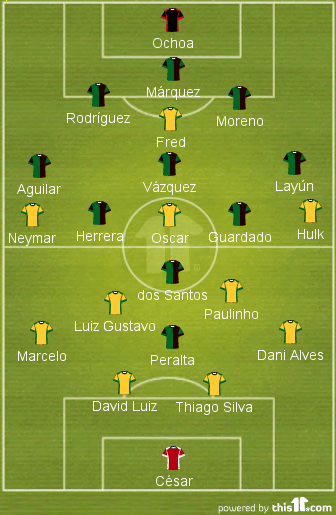 The wide battle - Brazil love to attack from the wide areas, and in this match, they'll be able to dominate them. Mexico's formation means they're wholly reliant on their wing-backs to patrol the flanks, which was fine against Cameroon -- whose wingers and fullbacks were too conservative with their positioning to ever prove too much of an attacking threat -- but will be rather more difficult against the more attack-minded Brazilians.

With Brazil's wingers regularly drifting inside and the fullbacks pushing forward, Mexico's wing-backs will have to deal with a nightmarish 2v1 situation; not knowing whether to stick man-to-man with the wingers or push out to prevent Marcelo and Dani Alves finding space on the overlap. If Brazil take advantage of this superiority, they'll probably win the game.

Outclassed Cameroon in every way

Outclassed Cameroon in every way

Luiz Gustavo vs. Giovani dos Santos - One of the star performers in Mexico's opening game was the mobile striker Giovani dos Santos, who scored both of Mexico's wrongly disallowed goals before playing a big part in Peralta's winner. He played as a second striker, drifting across the field into pockets of space behind his more immobile strike partner. If he can do the same on the counter for Mexico here -- particularly behind Brazil's fullbacks -- he could cause problems. It'll likely be up to Brazil's most defensive midfielder, Luiz Gustavo, to stop him.

Dani Alves vs. Andrés Guardado - When Mexico do have the ball, one of their most important players will likely be Andrés Guardado, who'll likely start in central midfield despite being naturally more comfortable wide left. That's because he still has a tendency to drift wide to support left wing-back Miguel Layún. Throw dos Santos into the mix too, and they could be able to work their way into some space in behind Brazil's right-back Dani Alves, and create some goal-scoring chances.

Mexico showed promise in their opening group game, though Brazil are much, much stronger than Cameroon. They'll likely take advantage of Mexico's tactical weakness out wide to record their second consecutive victory. 2-0 Brazil.