Share All sharing options for: Argentina get Lionel Messi back to his best with 2nd-half tweak

Argentina, widely considered serious rivals to Brazil to lift the 2014 World Cup, kicked off their campaign against Bosnia and Herzegovina on Sunday. Bosnia are largely an unknown, mostly because this is their first appearance at a World Cup, and because of that nobody quite knows what to make of them. On talent they should be slight favourites to edge out Nigeria for second in Group F; on name recognition they're ways below the the Super Eagles.

But if the Dragons were underestimated going into this match, they won't be going forward. Unlucky to go behind to a third-minute own goal, Bosnia gave Argentina a serious scare and for most of the ninety minutes the balance of the match was in at least some doubt. That said, the flow of the game was less about the World Cup newcomers and more about the Albiceleste, who didn't look nearly as good as we were hoping. 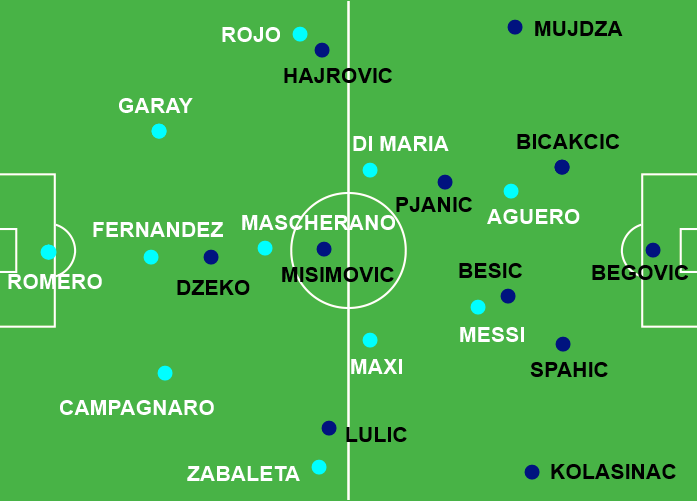 The match between Costa Rica and Uruguay gave us a nice demonstration of how effective a three-man back line can be in neutralising a two-striker system -- the Ticos completely shut down Edinson Cavani and Diego Forlan en route to a 3-1 upset. Conversely, this match showed the other side of 3-5-2: Argentina, for reasons that are currently unclear, shifted out of their usual 4-3-3 and began the match with a back three against Bosnia's 4-2-3-1. Here's why it didn't work.

The main motivation behind using three central defenders is to create an overload in your side's defence. Two centre forwards against three centre backs means that there's always a defender around to cover; if a striker beats one of them the covering defender can simply clear the danger before they take advantage. The 3-5-2 creates this overload in exchange for being weaker down the flanks than a 4-4-2.

But Argentina weren't facing two centre forwards -- they were facing Edin Dzeko and a mass of creative midfielders. The overload was, in effect, already present at the back, and everywhere else on the pitch the Albiceleste were outnumbered -- they only had seven players going forward while Bosnia were defending with nine.

Combine that with a midfield that's better known for pacy running than incisive passing, and Alejandro Sabella had a major problem: they couldn't get the ball to Lionel Messi in dangerous positions. For all the talk about his supporting cast (and, in fairness, Sergio Agüero, Ángel di Maria and Gonzalo Higuain are legitimate stars). Messi is the heart of this Argentina side, and their hopes rely on the Barcelona man having a good tournament.

He did not have a good first half. With Maxi Rodríguez and di Maria unable to provide a consistent line of supply, Messi was forced to drop deeper and deeper into the midfield to pick up possession, often finding himself immediately confronted by a wall of Bosnian midfielders whenever he claimed possession. In the 3-5-2, Argentina were asking Messi to beat four players at a time in order get free, which is a tall task even for one of the world's best players.

It's difficult to figure out what Sabella's motivation was for going with a 3-5-2, but he addressed it at halftime, withdrawing Hugo Campagnaro and Maxi Rodriguez for Fernando Gago and Higuain. The new shape -- really, the old one, since it's been what Argentina have been using for years -- makes far better use of Messi and the players surrounding him, and it was not a surprise to see Argentina more potent on the attack after the break.

With three forwards and three midfielders, plus the fullbacks providing support, Bosnia's defensive task suddenly got much harder -- essentially they were going from having to track di Maria, Maxi Rodríguez, Agüero and Messi to dealing with seven genuine threats. They still played well, especially Muhamed Bešić*, but denying space was far, far harder when confronted with the 4-3-3.

*Bešić is 21 and plays for Ferencvárosi TC, and you can almost guarantee that his name will be coming up in transfer rumours this summer on the strength of this performance alone.

Unsurprisingly, that led to Lionel Messi looking more like Lionel Messi. With Gago on the pitch to feed him and his fellow forwards to occupy defenders, Messi became far more difficult to stop, and it was no surprise when he scored his first ever World Cup goal, exchanging a one-two with Higuain, embarrassing Ermin Bičakčić and slapping a shot from outside the area past Asmir Begović and in off the post.

Although Argentina ended up conceding a late goal and were under some pressure for much of the second half, that was a vast improvement on the first, which saw them look totally lost despite scoring against the run of play. The 3-5-2 looked like a mistake from the beginning, and it's no surprise to see the Albiceleste play better once they return to their roots.

Bosnia, meanwhile, can take heart. They had a plan to shut their opponents down and executed well -- if not for a freak own goal in the third minute they could easily have come away with something against their toughest rivals in Group F. Granted, a third minute goal might have changed Argentina's approach, but that doesn't take anything away from Bosnia's performance. They defended well and dominated midfield in the first half, with Zvjezdan Misimović and Miralem Pjanić particularly impressive.

The Dragons will need to find a way to come up with goals -- Argentina's defence is nothing to write home about, and they should have troubled Sergio Romero more than they actually did -- but should they add a cutting edge to their midfield play this is a side more than capable of getting out of the group and perhaps causing some problems in the knockout rounds.