Didier Drogba wins the hearts of a Brazilian crowd

Share All sharing options for: Didier Drogba wins the hearts of a Brazilian crowd

Above all else, FIFA is a brand. To experience a World Cup game is to walk into an Epcot of advertisers: here, our Budweiser beer pavilion, and there, our Coca-Cola Penalty Shoot-out Deck. The brand is so important they removed over a dozen signs and banners Japanese fans had laid across the upper-deck scaffolding as TV coverage turned to the game, lest home viewers miss the colorful 2014 FIFA World Cup signs promoting the very event they've tuned in to watch. Saturday night, however, it was a brand of a different sort that turned an entire game on its head and reminded us all why corporate sponsors pay so much to be associated with the World Cup.

Despite three local club stadiums, Brazilian officials decided to build a brand new venue about 14 miles outside downtown Recife, a beautiful city along the Atlantic Ocean in the northeast. Coach buses were available for a reasonable cost to take spectators from a shopping mall out to the stadium, and they were productive and efficient, unlike most of the other preparation Brazil struggled with before the tournament. The light pollution from a 42,000-seat stadium out in the Heart of Darkness that surrounds every Brazilian city was visible from miles away, building anticipation amongst a bus full of strangers from all nations. Upon arrival, we spilled out into the stream of humanity that flows towards every stadium in the world, ponchos on to fight the rain that had been spitting all day. Most neutrals, if they made their preference heard, backed Japan. From the first kick, regular chants of "Nippon! Nippon! Nippon!" echoed throughout the stands, erupting into a roar when Keisuke Honda blasted home a half-volley past Ivorian goalkeeper Boubacar Barry in the 16th minute.

But by halftime, with Japan up 1-0, the steady drizzle that had dampened seats all day quieted the crowd. It's an interesting situation for the teams, playing for a crowd that was perhaps 30 percent pro-Japan, 20 percent Ivory Coast, and 50 percent neutral. Some people came to see a win tonight for their national team, but most came just because it was an available ticket in the town where they lived. Those people hoped to see a real game, a legendary game, and 1-0 in a steady drizzle at 11 p.m. on a Saturday night was not, at that point, that game. In the 55th minute, that all changed.

Star Ivorian forward Didier Drogba began warming up on the sidelines, and the chants quickly changed from "Nippon!" to "Drogba! Drogba! Drogba!" This guy, Brazilians know, can play. Even if he's lost a step, even if he's not broadcast on their TV every Saturday anymore, he can play. In a World Cup that's missing several stars already, his presence in the 62nd minute was a welcome respite. 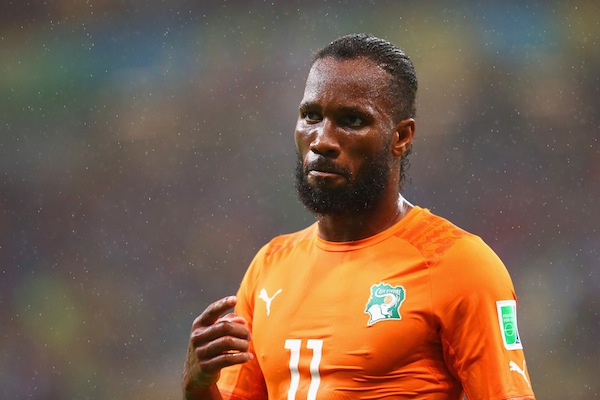 He walked on to the field with the confident step of familiarity, a traveler coming home after a long journey. Between a game of these two squads, this was his field to take, no matter where in the world it was being played. This, FIFA should note, is the true power of the brand. Over a decade of Barclays Premier League games being broadcast around the world -- to football fans in the most far-off places -- caused this moment tonight, with an arena of neutral fans who recognized a true superstar and stood up to see what he could do, and in turn, provided a huge boost to an Ivory Coast squad that had been flagging. With his first touch, Drogba made a run and gave the crowd everything they wanted; strength and control and a drive towards the net that only true, born-to-be-strikers possess. Behind the goal we gasped, then clamored for more. Two minutes after his arrival, right back Serge Aurier whipped in a cross to Wilfried Bony, who headed it into the back post and the conversion began.

Two minutes later Aurier did it again, finding Gervinho for a headed flick this time inside the near post, and the Elephants stole the lead, and the crowd, for good.

It's not enough to simply say that Drogba distracted the Japanese defense, allowing his teammates to score, because that doesn't say enough about the fire that was started in the atmosphere when he stepped on. People cheered when he touched the ball, they cheered for any Ivory Coast attack at all. They even started mimicking the shouts and gestures of the Ivorian drum-and-trumpet section. I'd never seen anything like it before, a perfect confluence of two fan bases either geographically or economically unable to come fully support their squad, leaving thousands of tickets available for neutral locals. A star, known around the world, changing the entire mood of the game merely by his presence on the field. Japan suddenly found themselves in an away game, simply because they didn't have a bona fide superstar. It was the cruelest of turns for a squad that had played sound, if unexciting, football most of the night.

A star, known around the world, changing the entire mood of the game merely by his presence on the field.

But that's the nature of the game in Brazil. From the national team on down, it's not enough to win, you must play. Your style is every bit as important as your substance, and whether he delivers it or not, Drogba is capable of a moment of brilliance as bright as anybody in the world at any time. He is a champion, a player worth riding buses for an hour and arriving home at 2:30 a.m. for, somebody you will tell your friends about tomorrow. As the final whistle approached, Drogba did the dirty work too, earning two successive corners just by holding the ball by the flag. He stood tall, ball under his toe, unable to be knocked over, a thousand-pound totem representing everything any casual fan has ever known about the Ivory Coast and its football.

Walking out from the stadium, into the swirling rain, slipping on small grass hills turned to mud slides, we saw a few very sad Japanese fans. It was a reminder that this was not just a football match for some; this was the culmination of a 10,000-mile journey that they'd started with high hopes. Group C is not too hard a group from which to advance, not for a Japan squad as technically skilled as almost any in the world, but now, this seems like a lot to ask.

For the Ivory Coast, this is a huge start. From a crowd standpoint, Colombia will be a road game, but against Greece, people will again come to see the Drogba. This is the magic of the talisman, the Brand. Deployed properly, he will once again win the crowd over and give a huge boost to his squad before he even touches the ball. He is a force, and he will have more to say before his Elephants head home.