Portugal on track to be the World Cup's biggest disappointment

One game, one utterly horrendous implosion. Unless they can turn things around quickly, Portugal's World Cup campaign could be over before it's even begun.

Share All sharing options for: Portugal on track to be the World Cup's biggest disappointment

On Sunday, Portugal would have been nurturing hopes of topping Group G. Cristiano Ronaldo was fit to play, the Germany defence was obviously vulnerable and neither Ghana nor the United States were serious contenders to hang with the Iberians if they were at their best.

Less than 40 minutes into their World Cup 2014 campaign, the team imploded. And by full time, they'd lost Hugo Almeira and Fabio Coentrao to injuries, Pepe to suspension and were looking at a -4 goal differential. Expectations were high -- now they'll be lucky to make it out of the group at all. In other words, we're looking at this tournament's France.

Portugal's gameplan against widely-fancied Germany would have been to frustrate their opponents through the middle of the pitch, draw their fullbacks forward and hit them with pace on the counterattack, with Ronaldo and Nani matched up against Jerome Boateng and Benedickt Howedes respectively. And it probably would have worked -- there were signs that Germany were ripe for the taking down the flanks -- but for one pesky detail: they conceded a penalty. In the tenth minute.

Counterattacking plans don't tend to work very well when your side is losing, and Portugal seemed to have absolutely no idea what to do once they'd conceded. Germany, meanwhile, could pull back, filling the gaps that were opening up when they were pushing for a goal and completely stifling anything Portugal could do.

when the going gets tough, Ronaldo tries to do everything. And it never works.

Portugal have never been accused of being able to take setbacks well, and Pepe in particular is one of the most notoriously ridiculous personalities to grace the sport. By the time we got to the 37th minute, Mats Hummels had doubled Germany's lead from a corner and Almeida had been withdrawn through injury, but then the hammer blow came. Pepe clashed with Thomas Muller and when the Bayern Munich forward fell theatrically to the floor, Pepe made a horrible mistake: he challenged him again, going head to head with Muller and getting a red card for his troubles.

Down 2-0 and to ten men against perhaps the silkiest counterattacking side on the planet, Portugal were, for wont of a better term, completely and utterly boned. And they knew it. But worse was to come. Germany grabbed another goal before halftime and would make it four in the 78th minute; meanwhile Portugal had lost Real Madrid left back Fabio Coentrao to what looked like a serious muscular injury.

But perhaps the worst moment came in the 85th minute, when Ronaldo lined up a free kick from 45 yards out -- an impossible distance when you're looking at a goal with Manuel Neuer in it -- and proceeded to drive it straight into the feet of a one-man wall. It was a ridiculous decision, one born from frustration, and it betrays the deepest, darkest problem with this side: when the going gets tough, Ronaldo tries to do everything. And it never works. 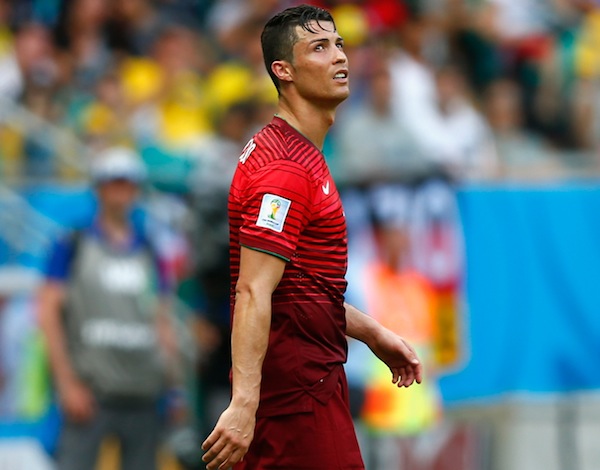 Germany 4-0 Portugal. It was a terrible performance, a worse result, and featured two serious injuries and two personal meltdowns. Where do Portugal go from here? It's not impossible for them to qualify from the group, but they're currently on course for a rather profound embarrassment. Turning themselves around for their next game isn't just a matter of finding sensible replacements for Pepe, Coentrao and Almeida -- it's about avoiding the sort of team-level collapse that feels like it's on the horizon.

Four years ago, we saw 2006 finalists France get dumped out at the group stages without so much as a single win. It was a campaign that marked the nadir of Les Bleus' fortunes, a talented, accomplished side that collapsed at the first sign of trouble. We're probably not going to see quite the same drama with this Portugal side, but it's not impossible to imagine a similar fate at the moment. And that's a very, very bad sign.