If Cameroon are to stand any chance of stopping Croatia, they'll need a big improvement on their opening defeat to Mexico.

For a worrying few minutes Croatia looked like upsetting Brazil's opening day party, taking the lead against the tournament hosts in the World Cup curtain-raiser. A dodgy penalty decision and three goals later they did suffer the anticipated defeat, though proved they certainly have the potential to do some serious damage in this tournament. First, though, they need to beat Cameroon.

The Indomitable Lions head into the clash with Croatia on Wednesday on the back of an exceptionally poor opening performance against Mexico. They were totally dominated throughout the match, and despite only losing 1-0, only a couple of bad refereeing decisions prevented El Tri from opening up a bigger margin of victory. If they're going to stand a chance of beating Croatia and progressing, they need a massive improvement.

Croatia would prefer not to be jilted darlings

Being beloved underdogs thanks to a horrendously unjust call is nice and all, but Croatia would rather have gotten a point.

Croatia would prefer not to be jilted darlings

The big pre-match concern for Cameroon surrounds the fitness of their captain Samuel Eto'o, who has missed a couple of days of training with a knee injury supposedly sustained at the back end of his domestic season at Chelsea. Given he's still one of the Indomitable Lions' most capable players, they'll be desperate to have him available. Alas, the chances look very slim. Expect Pierre Webó to come in up top.

The good news for Croatia is the return of Mario Mandžukić, who missed the opening game with Brazil through suspension. He'll likely slot straight into the lone centre-forward spot in place of Nikica Jelavić. The bad news is that they may be without star midfielder Luka Modrić, who who was taken to hospital after picking up a foot injury in Thursday's defeat. Fortunately it isn't broken, though does sound rather painful. 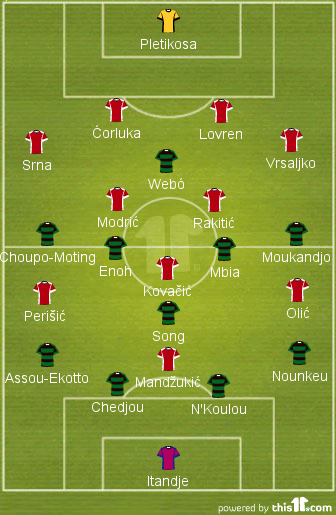 Cameroon's wingers vs. Croatia's full-backs - One of the reasons Cameroon were so outclassed by Mexico was the positioning of their wingers, who constantly dropped to shield their full-backs despite El Tri only operating with wing-backs out wide. The result was that they were at times defending with a flat six, leaving them with no attacking out-ball other than that to an isolated Samuel Eto'o. Their wingers need to be braver with their positioning against Croatia's full-backs if they're to harm Niko Kovač's side on the counter -- particularly given their lack of creativity through the middle.

Indomitable Lions outclassed in every way

Indomitable Lions outclassed in every way

Alex Song vs. Mateo Kovačić - Mexico's second striker Giovani dos Santos caused big problems for Cameroon in their opening game, finding pockets of space between their midfield and defence. For Croatia it'll likely be Mateo Kovačić deployed in this role, and Alex Song will have to do a better job of keeping him quiet. Fortunately Kovačić isn't quite as mobile or explosive as dos Santos, but could still do damage with incisive passing if given the space.

Cameroon's centre-backs vs. Luka Modrić and Ivan Rakitić - Despite Mexico dominating the wide areas against Cameroon, they were often at their most dangerous through simple through-passes straight through the centre of their porous defence. With Croatia boasting two of the finest passers in the tournament in deep-lying midfielders Luka Modrić and Ivan Rakitić, expect them to play direct, early balls up to Mandžukić in a bid to exploit this weakness. Let's just hope Modrić is fit enough to play.

Croatia are simply a much better side than Cameroon, and should take full advantage of their superiority across the field. Cameroon will surely have to play a little more proactively than they did against Mexico, though that could leave a weak defence even more exposed. 2-0 Croatia.

Cameroon vs. Croatia, 2014 World Cup: Easy win for the Croats