Spain vs. Chile: Champions look to recover after early humiliation

Spain suffered the worst possible start to the defense of their World Cup crown, and they'll have to get things back on track against Chile.

Share All sharing options for: Spain vs. Chile: Champions look to recover after early humiliation

After suffering a total humiliation at the hands of the Netherlands in the opening match of the defense of their World Cup crown, Spain have a must-win game against Chile to decide who progresses from Group B.

The Netherlands will be expected to overpower Australia. With Spain's goal difference taking a hammering in the slaughter against Holland, this match is a must-win for the defending champions as they try to avoid the embarrassment of a group stage exit.

The most incomprehensible loss in Cup history

The most incomprehensible loss in Cup history

Spain manager Vicente del Bosque has hinted that changes may be afoot. He has a huge decision whether to make wholesale changes after an early disaster or keep the faith in his veterans. Iker Casillas was probably the worst performer in the opening match, but his likely replacement David de Gea is injured, so he may yet keep his place. It's not known whether we'll see a drastic revolution over the space of one game, but Spain certainly have a lot to fix.

Chile, meanwhile, have no injury concerns and will likely stick with the team that was successful in winning its opening game against Australia, though the South Americans were occasionally troubled by the far lesser side. Chile are hoping their team can grow into the tournament, and don't yet have a reason to make significant changes. There were problems caused by the surprising decision to line up with two diminutive center-backs, but with Spain possessing less of an aerial threat than Australia, the same Chile lineup is likely to take the pitch. 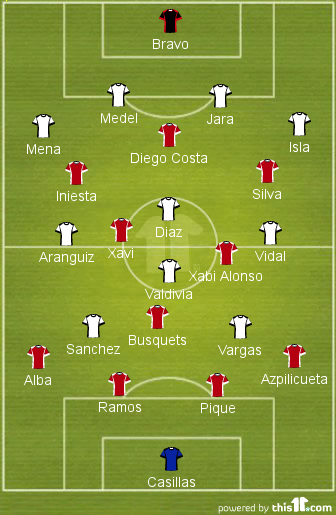 Valdivia will be the key creator for Chile regardless of formation, structure or selection, and Sergio Busquets will be the main stopper for Spain. Whether the Barcelona man can deny Valdivia the space he needs create goals could have an enormous impact on the match. With Chile employing two pacy forwards, Spain can't allow Valdivia to get in a position to supply ammunition.

Chile at the World Cup

A team that's flawed but fun with no defenders

Chile have sent a team without any defenders in it to the World Cup. The result so far has been hilarious.

Chile at the World Cup

A team that's flawed but fun with no defenders

Diaz probably doesn't qualify as a true holding midfielder, but he'll be Chile's best bet to stop Spain from creating. Xavi's game has become less dynamic, and while he's still capable of producing some devastating passes, Iniesta will be the main creator for Spain drifting inside. Diaz will have to stay alert at all times to guard even the possibility of him finding space. Spain have potential creators all over the pitch, but stopping Iniesta should be the first port of call for Chile.

Although Chile weren't great in their opener, it's impossible to see Spain recovering too well from such a comprehensive early thrashing. Del Bosque will be under tremendous pressure. If he changes too much, he could kill the golden goose, and if he changes too little, he could face the same disaster again. It's far from impossible for Spain to fight back with a great performance, but it's more likely that shell-shock will be lingering from that opening match. 1-1.