Clint Dempsey and John Brooks scored the goals for the United States, but Jermaine Jones was the team's real hero against Ghana.

In perhaps the most exciting match of the 2014 World Cup so far, the United States recovered from a late equalizer -- and more than an hour of serious pressure -- to beat Ghana, 2-1, and put themselves in prime position to qualify from Group G in the process. 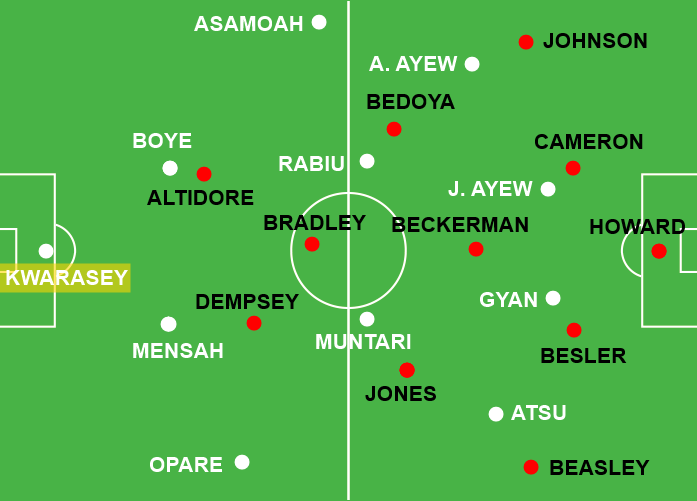 Pre-match, the main talking point was Ghana's switch to a 4-4-2 (they normally prefer something closer to 4-2-3-1), a hyper-attacking shape that was designed to blow the US away as quickly and efficiently as possible. Like the United States, the Black Stars likely saw this match as a must-win, and although playing an attacking lineup was a risk -- there was not a lot of defensive solidarity with Andrew Ayew and Asamoah Gyan up top, Christian Atsu and Jordan Ayew on the wings and Kwadwo Asamoah at left back -- it was an acceptable one.

Jurgen Klinsmann set up his side in the now-standard 4-4-2 diamond ... for about 30 seconds. Immediately after scoring, the United States switched to a flatter 4-4-2, matching the Black Stars' shape in order to counter their wide threats. It was a smart move. The diamond packs the midfield but is notoriously vulnerable down the flanks, and pushing the shuttling midfielders wide gave the US at least some protection against Ghana's rampaging wingers, particularly Atsu.

DaMarcus Beasley is considered by most to be the weakest link in this United States back line, and the Black Stars agreed, sending Atsu straight at him. The Vitesse winger was the best player on the pitch for the 78 minutes before his substitution, regularly carving the unfortunate left back apart with tricks before drifting past him and threatening the heart of the United States defense.

Winning ugly is the American way

Winning ugly is the American way

Strong defending by Geoff Cameron and Matt Besler -- later John Brooks, after Besler succumbed to a hamstring injury -- ensured that Atsu versus Beasley didn't result in a slew of goals on its own, but perhaps the only reason the USA weren't blown away down that flank was the incredible play of Jermaine Jones, who was shifted out to a left midfield position immediately after Clint Dempsey's first-minute goal.

Jones was miscast as a winger here, but he produced an extraordinary display, supporting the attack with aplomb, coming infield to help the midfield hold possession when required and shutting down highly-rated Ghana right back Daniel Opare. Opare was kept quiet all match, and as a result was unable to support Atsu with overlapping runs. Had he been able to do so, the USA defense would have been toast.

Jones, 32, was played out of position in an extraordinarily demanding role, and did so well that Ghana were forced to switch their attacking focus to the other flank despite a nightmare match for Beasley. It would be very difficult to overstate just how good the Schalke man was on the night.

Despite Jones' excellent shift, the US were broadly outclassed for most of the game, and their win came from a combination of opportunism and some appalling defending from Ghana center back John Boye, who switched off on a throw-in in the first minute to allow Dempsey to open scoring and on the 86th-minute corner from which John Brooks grabbed the winner.

It would be tempting to blame this lack of focus on the youthfulness of this Ghana team -- the Black Stars have the youngest squad of any team in the tournament -- but Boye is 27 and has plenty of experience in Ligue 1 with Rennes. His lackadaisical play in a key World Cup game could well have cost his country the chance at the knockout rounds.

Victory comes at a price for Team USA

Three points in this match is an invaluable reward for the United States, but they come at a heavy cost: Klinsmann lost two key players in Matt Besler and Jozy Altidore to hamstring injuries before halftime, Clint Dempsey suffered a broken nose after being kicked in the face by Boye and Alejandro Bedoya seemed to be having trouble moving around before he was pulled off for Graham Zusi in the 77th minute.

How can the U.S. advance out of Group G?

While Besler has a direct replacement in John Brooks, who'll almost certainly start the match against Portugal after grabbing the winner, Altidore does not. Altidore is not a particularly good player, but he brings a unique brand of physicality to the United States, and neither Aron Johannsson, who came in for him on the night, nor Chris Wondolowski can fill his role exactly.

If Altidore's hamstring injury is as bad as it looks, it's not out of the question that we see a fairly significant tactical switch from Klinsmann in the near future.