John Brooks' goal sent an estimated 20,000 American fans at Arena das Dunas into frenzied ecstasy. One man went flying down three rows, fell, got up and hugged the first person in front of him. Next to him there was a dog pile, a mass hug gone wrong in the best possible way. Turn in any direction and you could see someone yelling "HOLY SHIT."

Half of the audience didn't realize when Ghana kicked off again. Fans weren't even facing the field. Overcome by that one exquisite moment, the Americans in the crowd were too busy hugging, jumping, screaming and crying to notice the downcast Black Stars resume the game.

The night before the match, U.S. Soccer threw a giant party. Hundreds of people packed into a tent in the middle of Natal, eating and drinking while Argentina vs. Bosnia and Herzegovina played on the big screens. When that ended, everyone hit the bar and, before long, the dance floor.

The party turned into a makeshift rave, with music blasting and the tent stuffed full of red, white and blue bodies under red and blue strobe lights. An LED globe flashed the U.S. Soccer logo over a giant sign that read "One Nation. One Team." By the time the party was shut down there wasn't a sober person in sight.

And yet the next afternoon, no one looked any worse for the wear. Everyone piled into a bar a few blocks from the stadium, beers in hand. The indoor area was full, making it difficult to move. The patio wasn't any better. And outside, the crowd swelled and swelled until it took over the entire parking lot. The closest some people could get was the street, and they stayed in the street, watching, singing and drinking. 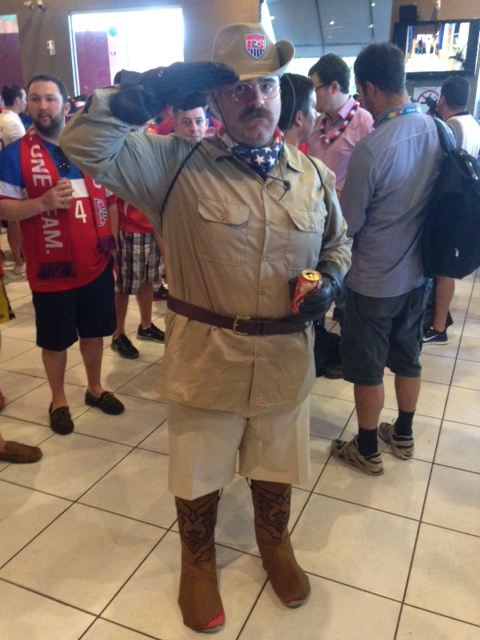 One man was dressed as Teddy Roosevelt, complete with hat, glasses, mustache, beige hunting suit and boots. Another walked around in nothing but suspenders patterned in stars and stripes, while four Abraham Lincolns, a George Washington, two Elvises, a Duffman and the entire Justice League paraded around. You didn't have to look far to find a girl in an American flag bikini top or a man in U.S. board shorts with no shirt. It was a sea of red, white, blue and skin.

The supporters were gathered along a main road where buses passed by every five minutes. And everyone on every bus wanted to see the party that was going on. They stuck their heads out of the windows and took pictures, and when they did the partygoers responded with chants of "U-S-A!" that were joined by the fans on the buses. One Brazilian man jumped off his bus and began jumping up and down while chanting along. By the time the chant ended, he had a beer in each hand.

Somehow, a Mexico fan also made his way to the pre-game. He didn't stay long.

The U.S. fans screamed at the top of their lungs, booed and chanted "dos a cero" and "forever in our debt." The Mexico fan didn't have enough time to get a drink before he was urged away and down the street.

Fans from any other country were welcomed in. A man draped in an England flag bought a round and, immediately, became a fan favorite. A Costa Rican fan was met with cheers of "CON-CA-CAF!", and even though the Ghanaians were jeered, they were eventually given beers.

It was a giant party. Every five minutes a new song would break out, from "I Believe," to "God Bless America," to "The Star Spangled Banner." Everyone would join in with every song.

Two hours before kickoff, the party moved to the streets of Natal and the stadium, and the singing didn't stop. The mass of Americans marched to the stadium, creating a sea of red, white and blue. You could not see the end of the march from the front -- it stretched at least four, five, six blocks long.

Fans from any other country were welcomed in. even though the Ghanaians were jeered, they were eventually given beers.

As marchers passed apartment buildings, bystanders would come out to the balconies, wave, take pictures and clap along. Construction workers rushed down to the bottom of the tower they were building and ran into the crowd, posing with fans while their colleagues took pictures. Everyone wanted pictures with or of the Americans, and before long it looked as much like a ticker tape parade as it did a walk to a soccer match.

The Americans had to split up when they got to the stadium, forced to enter through assigned gates and go to their respective sections, but as soon as they got into the seating bowl, the chants started again. An hour before game time, with half of the stadium still empty, there were American fans throughout, making the Arena das Dunas echo with chants of "U-S-A!"

When Brad Guzan and Nick Rimando walked on the field for warmups, the screaming started. Minutes later, Tim Howard came out of the tunnel and the fans chanted his name. When the rest of the team came out, they clapped for the fans, who returned the love with a three-minute rendition of "I believe that we will win."

There were old men and women in the stands with their faces painted. There was a grandfather with his grandson and plenty of fathers with sons. One woman brought her daughter and another brought her two sons. There was an eight-year-old with an American flag painted on his face sitting on his dad's shoulders. Any time the small corner of Ghana fans would start to sing and dance, they were quickly drowned out, and it remained that way until kickoff.

The first lull of the match came 20 seconds after it got underway. The roar to start the match died down and the magnitude of the moment -- the World Cup -- set in.

That lull didn't last long. When Clint Dempsey took his first touch to turn towards goal, the crowd rose. Then he cut in, leaving a defender in his wake and the crowd screamed. Seconds later, the ball hit the post, then the net, and the noise became deafening. 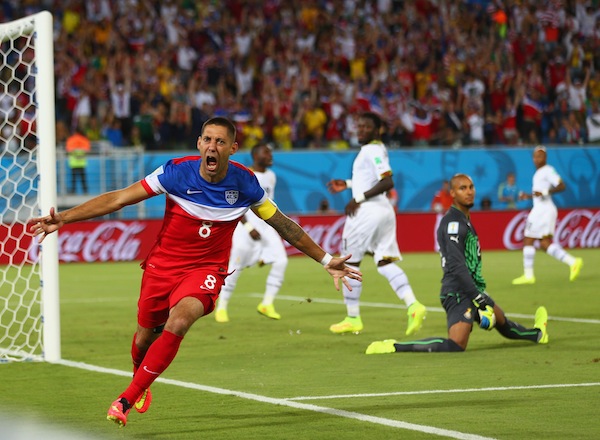 Few could believe what they had seen. It took Dempsey all of 29 seconds to put the U.S. in front and score the first goal from an American forward at a World Cup since 2002. The fans responded with cheers of "U-S-A!" It was loud.

"I LOOKED AWAY. I DIDN'T SEE IT," one man yelled mid-hug.

It seemed like a good omen for the Americans. Everyone was saying, "we need another" and "pour it on, get that goal difference up." Little did they know that the rest of the match would be a matter of survival. After 15 minutes, the feeling was that the U.S. "just needed to turn it around." By the 30-minute mark it was "please just let us get to halftime."

Every few minutes, the U.S. would get possession and fans would try to get a chant started, but the team would give the ball away within seconds and kill it. By halftime, nobody believed that the U.S. would be able to hold on. People were discussing the group situation and what the U.S. would have to do in their final two matches. They had already conceded, "hopefully we draw this match."

By the time Ghana scored to bring the match level, nobody was crushed. The goal felt like it was a long time coming, and with it being so late in the match, it was possible for the U.S. to hold on and nab a point. Any doom and gloom wasn't about the equalizer, but about the Ghanaian winner that was assuredly on the way.

And yet Fabian Johnson went scampering down the right. The crowd rose again and faint echoes of "I believe that we will win" could be heard. Johnson earned a corner kick and the entire stadium rose to its feet.

"U-S-A!" chants erupted once more, even louder than before. Noise was emanating from every corner of the stadium, a crash of sound that shook the very fabric of das Dunas. It spilled from the top deck and flooded the bottom. Even in the hospitality sections, blocked off from the rest of the crowd by glass walls, the fans stood and a few brave Americans shrugged off the ire of the nearby suits to join their compatriots in song.

When Zusi stepped to the ball, everyone went quiet. Be it nervousness, uncertainty or hope, the Americans in the stands had found something that had their throats in their stomachs. There was a hush.

Then the ball found its way to the middle. Brooks leapt. He headed the ball down. It hit the ground. It bounced. And somehow, it hit the back of the net.

For love of country

Celebrating the U.S. Men's National Team, its underdog status, and a diversity that can only be described as American.

Mosh pits and dog piles broke out. If you could reach somebody, you hugged him or her. Everyone received kisses. The crowd was so loud it didn't sound like anything. It became a din of white noise so loud as to defy coherence.

There wasn't a complete sentence to be heard. It was a mix of "OH MY GOD" and a wide array of expletives. It was absolute madness. It was, in other words, World Cup soccer.

The elation from the goal wore off when Ghana went forward again. The Black Stars were dangerous, and despite the injection of adrenaline, few believed that the U.S. would be able to hold off their late surge. The fourth official signaled for five minutes of stoppage time and 30 seconds later fans were yelling at the referee to blow the final whistle. Every clearance was followed by wild cheers and screams.

Nobody cared about beautiful soccer. They didn't care about being proactive. Fans were calling for players to dive and waste time, yelling "THEY DOVE FOR 15 MINUTES LAST WORLD CUP, DO IT TO THEM."

Finally, the referee blew for full time, which proved to be a good moment to relive the experience of Brooks' goal. Hugs, kisses, tears and people tumbling down rows of seats. The players made their way to the ends and sides of the stadium, applauding for their fans. The fans returned their appreciation with chants of "U-S-A!"

The local Brazilians joined the cheers. American fans gave the locals U.S. scarves and shirts on the way out. They all wanted pictures with their new Brazilian friends.

The stadium emptied out, but a few thousand Americans stayed. They kept chanting, even as everyone left. The stadium echoed even with the voices of just a few American stragglers. They took pictures and savored the moment.

Twenty minutes after the match was over, there was just a handful of fans left, including one woman who was still sitting in her seat, staring at the pitch as the grounds crew went to work on repairing the pitch. She then got up, tears in her eyes and as she walked out, she said just three words.