The Netherlands were given a scare by Australia, but came from behind to win 3-2.

The Netherlands came from behind against Australia in Porto Alegre to record their second win of the group stages. The Socceroos certainly didn't make life easy for the Dutch, taking the lead through Mile Jedinak after Tim Cahill cancelled out Arjen Robben's opener. However, they largely failed to take their chances against a clinical Oranje, and goals from Robin van Persie and Memphis Depay ensured they were made to pay a heavy price.

Australia seemed to catch the Netherlands off-guard with their bright start to the match, in which they looked comfortable on the ball and defended deep and compact; denying the Oranje the space to hit them on the counter. However, with Arjen Robben in such outstanding form, it was only a matter of time before he worked some magic. So it proved after 20 minutes, when the Dutch attacker spun away from Australia centre-back Alex Wilkinson and charged through on goal, before sliding the ball past keeper Mathew Ryan for 1-0.

Australia's Tim Cahill might have scored the best goal of the 2014 World Cup.

However, it incredibly took just 13 seconds of play before Australia deservedly levelled the game up. Predictably, their talismanic striker Tim Cahill was responsible, netting what may well prove to be the best goal you'll see at the World Cup this summer. Makeshift right-back Ryan McGowan swung a deep cross towards Cahill, who proceeded to perfectly volley the ball past Jasper Cillessen and into the top corner.

Australia had caused great problems in behind the Dutch wingbacks, and Mathew Leckie did so again just past the half-hour. He pulled the ball across for Mark Bresciano, only for the veteran midfielder to fire it way over the crossbar. A minute later an equally golden chance fell to centre-back Matthew Špiranović in the box, though he scuffed his shot after escaping his marker. By halftime, the Netherlands were lucky to just be level.

It took less than 10 minutes of the second half before their luck did run out, as the Socceroos took a shock lead from the penalty spot. Mile Jedinak coolly rolled a penalty beyond Cillessen after Daryl Janmaat blocked Oliver Bozanić's cross with his arm, and Australia had a surprise advantage. Unfortunately for Ange Postecoglou's side, the Netherlands' response to going behind was almost as quick as their own.

Some poor defensive play from Australia left-back Jason Davidson allowed Memphis Depay to pick out Robin van Persie in space in the box, and unsurprisingly he made the most of it; slotting the ball past Ryan to level the game up. Once again the momentum swung the way of the Oranje. 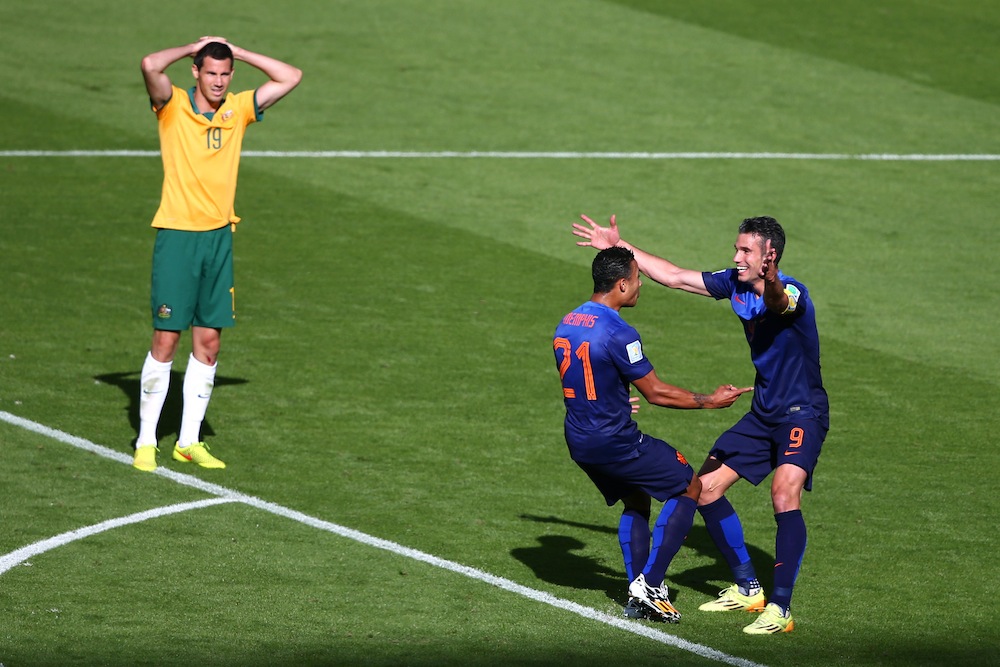 With just over 20 minutes remaining, the Netherlands were back in front. A rapid counter-attack culminated in Depay finding the room to lash an excellent swerving shot past Ryan from distance for 3-2. Making matters worse for Australia was that they'd just squandered another great chance at the other end, with with Tommy Oar getting into a goalscoring position only to smash an overhit cross at his teammate Leckie.

Nigel de Jong should've killed the game off with a fourth moments later, though Ryan did well to get down and deny the midfielder from close range. Fortunately for de Jong, it didn't matter, with the Dutch hanging on to record their second win in as many group stage games. With this Australia's second defeat, their World Cup is all but over.