Chile send champions Spain crashing out of the 2014 World Cup with a stunning 2-0 victory.

Whoever could have envisioned the end of Spain's era of dominance would not have imagined a dethroning so brutal or a surrender so tame as this. La furia roja have won their last three international tournaments, but the current champions are now the first team to exit the tournament as Chile produced a brilliant display to earn a well-deserved 2-0 victory.

In a hostile atmosphere at the Maracana, with the vast majority of the crowd backing Chile, Spain were outplayed by their South American opponents and it was an earned goal when some magic from Alexis Sánchez helped to set up Eduardo Vargas to score Chile's opener.

Spain became frustrated as the first half progressed, and their frustration soon got a lot worse as Chile made it 2-0, with poor goalkeeping from Iker Casillas again responsible as Charles Aránguiz drilled in Chile's second.

Chile came flying out for kickoff and almost scored twice in quick succession within the first minute, with a tackle to deny Arturo Vidal almost rolling into the Spain net before Gonzalo Jara headed wide from the resultant corner. But Spain did not look too rattled for the opening spell, and perhaps ought to have taken the lead when Diego Costa's hesitation saw his shot stopped after he had been put through, with Xabi Alonso firing the rebound wide. 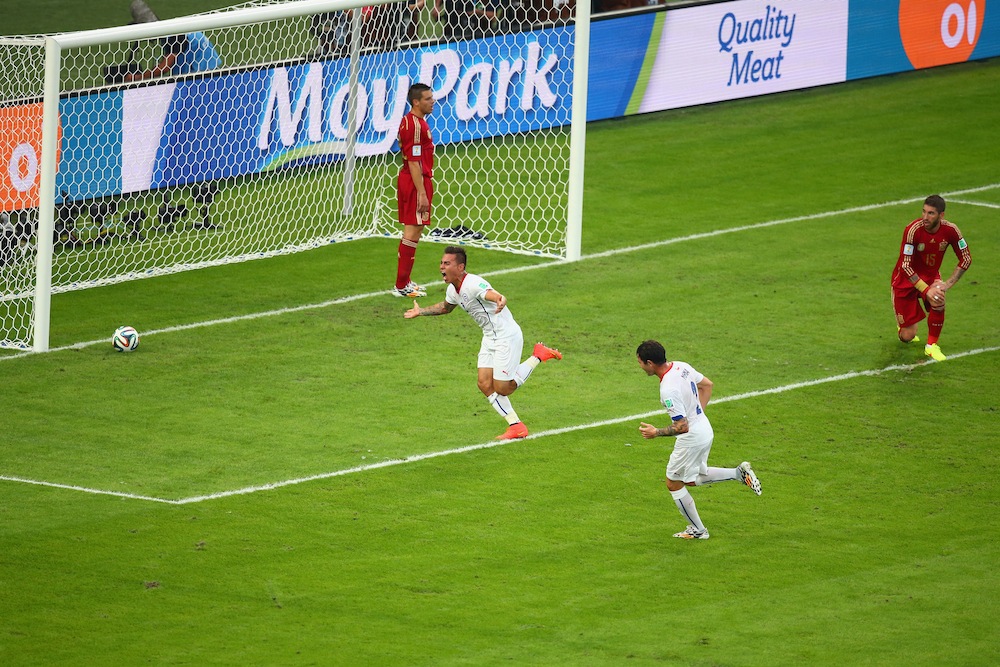 It was the beginning of the end for Spain as Eduardo Vargas put Chile up 1-0, Photo credit: Julian Finney/Getty Images

Chile's play has mostly focused around their devastating counter-attacking, and Spain soon paid the price as a glorious breakaway put the South Americans ahead. Sánchez created the chance, zipping forward only to end his run with a wonderfully deceptive short pass, completely fooling the pursuing defenders. They turned their attention to Aránguiz, who spun around to slide the ball to Vargas. A touch from the winger took Casillas out of the equation, allowing Vargas to poke the ball into the back of the net.

Spain were now in serious trouble, and frustration began to creep into the champions' game. Alonso was booked for a daft challenge after leathering a decent effort miles over the crossbar. There was more urgency to Spain's play, but if anything less quality, and they could not fashion another chance and looked badly disorganized in defense. And with Chile already having demonstrated their threat on the counter, Spain seemed reluctant to push forward and support Costa.

Casillas had been kept in goal despite his horror show in the Netherlands game, but he did little to justify his inclusion when a routine Chile free-kick was oddly punched back into the area by the Real Madrid keeper. Aránguiz was waiting in the perfect location to take advantage, and the Spanish defense had left him enough time and space to take a touch before smashing the ball into the net to leave Spain's hopes hanging by a thread.

Spain regrouped in the second half and came out looking better, but never truly seemed to possess the belief necessary to go on and seize control of the situation. This was probably best summed up a few minutes into the second period when Costa hooked a ball in following a cleared set-piece for Sergio Busquets at the back post, who had a simple finish but his pathetic toe-poke was easily kept out by Claudio Bravo.

Spain, Xavi and the end of a dynasty

Spain's early exit from Brazil 2014 is mostly down to an aging core.

Spain, Xavi and the end of a dynasty

Costa had also missed a good chance as Spain looked to get back into the game, but after a decent spell to start, they simply seemed to run out of ideas and the game became increasingly comfortable for Chile as it drew to what had appeared for a long time an inevitable conclusion. Chances began to peter out, and Sergio Ramos sending an overhead kick almost out of the stadium with minutes left to play was one of many symbolic moments in the game.

Chile were excellent, but this was wretched, miserable stuff from Spain. There was not solely about a lack of desire -- although they certainly lacked that as well -- but a lack of quality, a lack of organization, and a lack of ideas. It's possible in a geopolitical sense that Spain may not exist as the same country by the time the next World Cup rolls around. But this squad will not last another game, and the idea of Spanish football is far from in a stable condition. This is what the end of an era looks like -- it's rarely pretty, but equally, it is rarely this inexcusably poor.