Two resounding defeats have sent the defending champions crashing out of the 2014 World Cup, and have surely brought the curtain down on one of the finest international sides the world has ever seen.

Share All sharing options for: Spain's great gamble was a massive failure

There are two ways for a football team to die. Had Spain added a second World Cup to their 2010 triumph and their two European Championships, the core of arguably the finest international side ever could have hung up their boots with applause ringing in their ears. Instead: farce, tears, mocking laughter, and open mouths of astonishment. It's the earliest exit that a defending champion has ever made from the World Cup. It's also, and by some distance, the most surprising.

Three of the last four tournaments have seen the holders exit at the group stage. But where France in 2002 could blame an unfit Zinedine Zidane and the usual French internal combustion engine, and Italy in 2010 could point to the fact that they were a radically different side, Spain came to Brazil as second favourites, and that only on the basis of Brazil's home advantage. There were concerns about the fitness of some players and the age of others, but the general consensus was that they would still be, well, Spain. 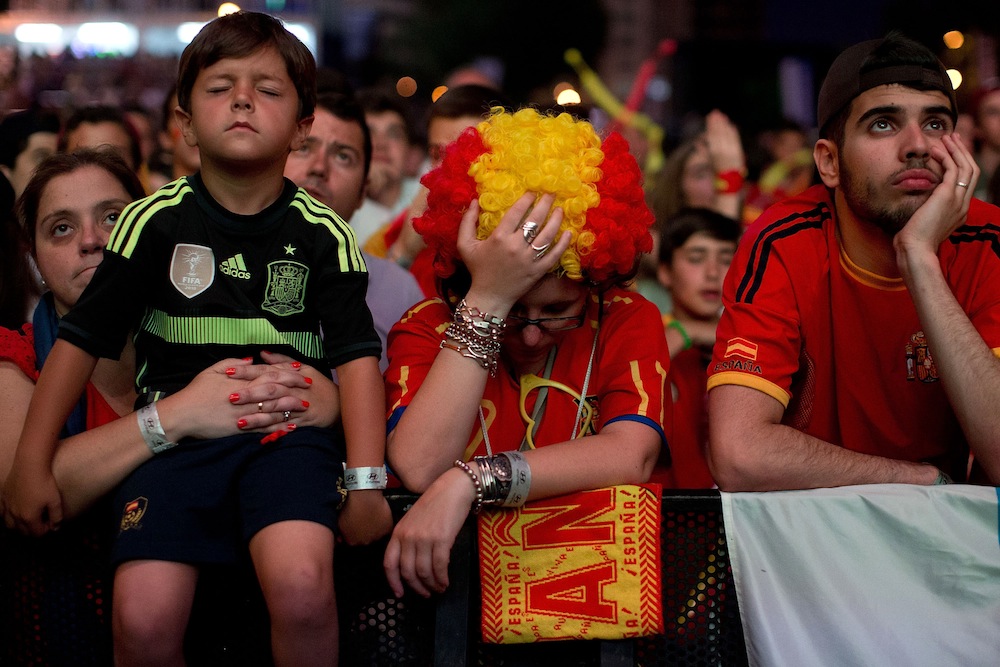 One thing that history may overlook is the fine margins at play. Spain just about edged the first half against the Dutch, until Robin van Persie did something completely ridiculous, and had Sergio Busquets not managed to symbolically misplace a shot that was, in essence, a three-yard pass into the goal net, then the Chile game could have been different as well. That's tournaments, though, and the luck of the draw: had Spain ended up in a group with Greece and Ecuador, then they'd likely still be in the tournament. And that's the danger of ideological football; a team that plays a certain way leaves itself vulnerable and predictable if the execution drops.

Reports of the death of tiki-taka are doubtless exaggerated; the basic precept, that possession can be used to dominate a team in both attack and defence simultaneously, still stands up as a decent way to win a football match. (Germany may even win a World Cup doing something not too dissimilar.) But looking at Spain now and in 2013, and at Bayern Munich and Barcelona's recent exits from the Champions League, it seems fair to suggest that reports of the mortality of tiki-taka are entirely accurate.

So, too, the mortality of the players. When Jose Mourinho dropped Iker Casillas to the Real Madrid bench it was seen as an act of political grandstanding, as Mourinho being Mourinho. But he was right, as he so often is. And when he said that this season's Barcelona — Xavi's Barcelona — was the worst for many years, he was right as well. As my colleague Graham MacAree points out in his own analysis of yesterday's game, Xavi is — no, hang on, was — "perhaps the only midfielder on Earth with the combination of legs, technical ability and vision to ensure that Guardiola's vision clicked into place." With him losing his edge and then his place, the passing carousel stutters, the wooden horses jerk and stall, and gangs of Chileans and Dutch youths are able to charge in and set fire to the whole thing.

Perhaps, in a funny sort of way, Spain's own previous winningness was ultimately their undoing. Victory prolongs careers, rightly and wrongly, and so Spain went into the tournament with a goalkeeper who is no longer first-choice for his club, and without having needed to identify a workable alternative to the Xavi-Xabi midfield, both of whom have been getting noticeably leggy over the last two seasons. Kind eyes before the tournament saw a deeply experienced squad; cruel ones, post-defeat, see a superannuated and quaintly nostalgic group. As is so often the case, the inclusion of Fernando Torres sums everything up, his presence in Brazil only really justified by the fact that, well, he was pretty good when they started winning things, and he's been knocking about ever since.

Or perhaps the key lies with Diego Costa (who, if Brazil go out through lack of firepower, might go down in history as the man who ruined the World Cup for two nations). The naturalised-Brazilian was the focal point of the best team in Spain last season, but they were a team that played a radically different kind of football, one built on reactivity and the counter-attack. The great blessing of this Spain side has been the core of Barcelona players, able to translate their club relationship smoothly over to the international stage. Costa, for all that he'd earned his place on merit, disrupted that harmony, and would likely have done so even had he been fully fit.

A tweak too far here, and not enough tweaking there. Perhaps the two are connected; perhaps the thinking was that an in-form striker could compensate for the diminishing midfield while deferring until after the tournament the politically sensitive business of replacing them. Midfield's getting a bit slow? Best chuck a striker in. They needed goals from somewhere — no European team scored fewer in the process of winning their qualification group — but in the end, Costa ended up a peripheral, grouchy presence, kept out by a Chilean defence composed of precisely zero centre-backs.

This is how things go, of course. Cycles cycle, teams rise and fall and are chewed up and reconstituted and are rebuilt and come back for another go. The next Spanish team will be centred around Atletico Madrid's Koke, 22, who got just 45 minutes in the course of this tournament. It will be built around Real Madrid's Asier Illarramendi and Isco, 24 and 22, and Costa, still only 25, will lead the line. In goal will be Manchester United's David de Gea, 23. It will be quicker, it will be younger, it will be less dogmatic, and it may never attain the hypnotic purity or the ridiculous trophy-hoovering heights of its predecessor. This now-ended run of European Championship-World Cup-European Championship is unprecedented, and may well be unrepeatable.

Bela Guttmann prescribed three years maximum for any manager; Alex Ferguson four for any team. Del Bosque has been in his post for six years; Spain, between the start of qualification for Euro 2008 and the Confederations Cup in 2013, have been the best team in the world for seven. Ultimately, Del Bosque gambled that he could postpone the serious reconstruction, that he could squeeze one last hurrah out of a truly great side. He was spectacularly wrong.

And yet ultimately, though few saw it coming, there was something familiar about the whole debacle. They looked nothing like the Spain we've become accustomed to over the last few years, but they looked exactly and tragically like Old Spain. Disappointing Spain. Rubbish Spain. The Spain that used to turn up to every international tournament with a fistful of the best players in the world, encourage everybody to think that this year might be the right year, and then proceed to make a mess all over their shoes. Ask your parents, kids. They used to be a tragicomic punchline. Now they are again.