After surprisingly beating Uruguay in their World Cup opener, Costa Rica will look to cause another upset against Italy.

Share All sharing options for: Italy vs. Costa Rica, 2014 World Cup preview: Los Ticos hoping to cause another upset

Both Italy and Costa Rica kicked off their World Cup campaigns with victories, and sit joint-top of Group D heading into their meeting in Recife on Friday. While the Azzurri were always favourites to edge a narrow win over England, Los Ticos stunned against Uruguay, coming from behind to record their first World Cup victory since they edged out China 12 years ago.

Costa Rica head into their clash with Italy as underdogs once again, but their confidence will no doubt be as high as ever. Heavily fortified at the back and lightning quick up top, they certainly have the potential to cause problems for an Azzurri side that looked less than convincing defensively in their opening fixture. Expect Los Ticos to sit deep and soak up pressure, and try to harm Cesare Prandelli's side on the break.

Italy look set to make a couple of changes to their starting lineup after they were given a scare by England. Centre-back Gabriel Paletta is expected to make way for fullback Ignazio Abate, allowing Giorgio Chiellini to play in his more natural position in the middle. Abate should slot in on the right, with Matteo Darmian on the left in the absence of the injured Mattia De Sciglio. Thiago Motta is expected to come in for Marco Verratti in the centre of midfield, while Gianluigi Buffon has recovered and should start in goal ahead of Salvatore Sirigu.

Contrastingly, Costa Rica aren't expected to make any changes to their winning formula. They'll stick with their central defensive trio, with Júnior Díaz and Cristian Gamboa acting as wingbacks. Bryan Ruiz should keep his place in midfield, looking to link with their major goalscoring threat Joel Campbell. 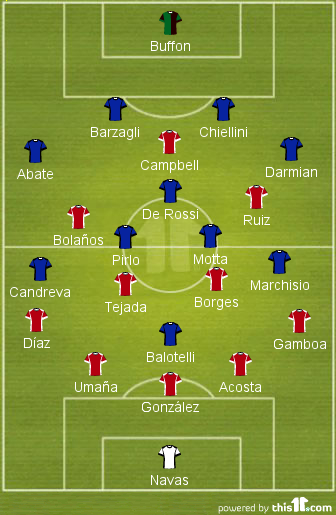 Antonio Candreva vs. Júnior Díaz - One of the stars of Italy's World Cup opener was winger Antonio Candreva, who linked well with fullback Matteo Darmian to cause havoc down England's right. Unlike Marchisio who's expected to start on the left, Candreva is a pure winger, whose strength lies in breaking with pace and delivering good balls into the box. If he's on form again, Júnior Díaz could have a hard time keeping him quiet.

How to watch while at work

Won't be near a TV when Italy take on Costa Rica? We can help.

How to watch while at work

Thiago Motta vs. Bryan Ruiz - In the search for greater defensive steel in the midfield, Cesare Prandelli looks set to turn to Thiago Motta in place of playmaker Marco Verratti. Thiago Motta would likely be directly up against one of Costa Rica's most important players, Bryan Ruiz, who likes to drift forward from midfield to service Joel Campbell and wingback Cristian Gamboa. If Motta can cut off Ruiz's supply, Costa Rica could find it much more difficult to get the ball forward.

Italy's centre-backs vs. Joel Campbell - England caused havoc against Italy with their attacking pace, something surely noted by Costa Rica's lone striker Joel Campbell. The Arsenal youngster's speed is one of his greatest attributes, and he could cause big problems for Andrea Barzagli and Giorgio Chiellini -- though dropping the statuesque Gabriel Paletta to the bench will help the Azzurri deal with this threat.

Costa Rica were excellent against Uruguay, and they shouldn't make life easy for the Azzurri. However, Cesare Prandelli's side are still individually much stronger than Los Ticos, and that'll likely be enough to see them through. 2-0 Italy.