Honduras vs. Ecuador, 2014 World Cup preview: Both sides in need of victory

Ecuador should have enough to beat Honduras as both sides battle to stay in the World Cup.

Share All sharing options for: Honduras vs. Ecuador, 2014 World Cup preview: Both sides in need of victory

Both Honduras and Ecuador started their respective World Cup campaigns with defeats, though one was rather more unfortunate than the other. While Honduras attempted to kick the living daylights out of their opponents en route to their warranted 3-0 loss, Ecuador agonisingly conceded with the last kick of the match against Switzerland, as they threw away a 1-0 lead to lose 2-1.

True to form, therefore, Ecuador head into their clash with Honduras as strong favourites to win. They're much more technically skilled than Los Catrachos, and should run out victors. If France and Switzerland draw in the group game directly preceding this one, then the losing side will be eliminated from the tournament. Sorry Honduras, that'll likely be you.

Honduras head into this game without central midfielder Wilson Palacios, who was sent off for two bookable offences after being fortunate to escape a straight red for trampling all over Paul Pogba against France. They'll apparently draft defensive midfielder Jorge Claros into the starting lineup in his place, with other change also possible. It wouldn't be a surprise to see Óscar Boniek García drafted in to give them more threat from out wide, with Andy Najar shifting to the left of midfield and Roger Espinoza the centre.

Ecuador, meanwhile, should have a full complement of players available for this clash in Curitiba. They were pretty good in their opener against Switzerland, and coach Reinaldo Rueda isn't likely to make any unenforced changes, especially given his starting lineup has been pretty predictable for quite a while. 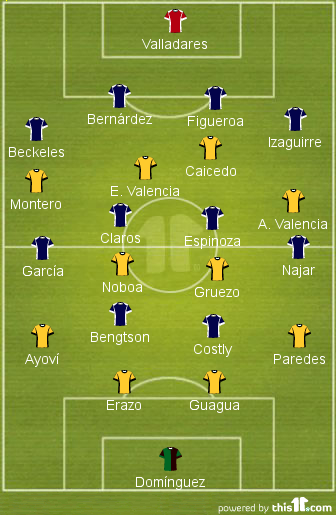 Brayan Beckeles vs. Jefferson Montero - Ecuador winger Jefferson Montero was outstanding against Switzerland, giving the left side of La Nati's defence nightmares with his pace and trickery. Should Honduras right-back Brayan Beckeles have as many problems as Stephan Lichtsteiner and Johan Djourou did, then Ecuador strikers Felipe Caicedo and Enner Valencia can expect plenty of service from the left flank. A good performance from Beckeles here will be key.

Jorge Claros vs. Enner Valencia - Another bright performer in Ecuador's narrow defeat to Switzerland was Enner Valencia, who effectively plays as a second striker behind Felipe Caicedo, drifting across the pitch trying to find space between the lines. Honduras will have to defend well to keep him quiet, with Wilson Palacios' likely replacement, Jorge Claros, in particular likely to be tasked with sitting deep and preventing him dictating play through the centre.

Honduras' direct passing vs. Ecuador's defence - Honduras were incredibly defensive in their game against France, and looked like they were wholly playing for a goalless draw. Even after they went behind they continued to pack men behind the ball and break up France's flow with scrappy fouls, eventually having Palacios sent off as a result. They looked totally devoid of an attacking plan. With this game really a must-win, they can't afford to do the same again. Thus, expect them to pump long balls and crosses into the Ecuador box at their tall strikers. If Ecuador can withstand these deliveries, they'll probably keep a clean sheet.

Follow Ryan Rosenblatt, on the ground in Brazil 3 reasons we're falling in love with Chile

Honduras didn't show anything but physicality in their defeat to France, and Ecuador's attacking flair and invention should prove too much. 2-0 Ecuador.