England are on the brink of World Cup elimination after a late defeat to Uruguay.

England are on the brink of elimination of the World Cup courtesy of a 2-1 defeat to Uruguay in São Paulo. A brace from Luis Suárez came either side of a second-half Wayne Rooney equaliser, which means the Three Lions need a miracle in the remaining group games to progress into the knockout stages.

Despite their defeat, the Three Lions started brightly and went agonisingly close to taking the lead inside the opening 10 minutes when Wayne Rooney's free kick curled wide. However, it wasn't long before Uruguay looked a little more confident in possession, with their first chance blazed over by a free Cristian Rodríguez on the edge of the box five minutes later.

The game still stayed very even, and the England went even closer just past the half-hour when Rooney nodded a Steven Gerrard free kick against the crossbar from point-blank range. Despite the scare, Uruguay looked pretty sturdy from open play, just biding their time and looking to hit England on the counter-attack. With just over five minutes of the first half remaining, their strategy bore fruit.

Óscar Tabárez's inclusion of playmaking midfielder Nicolás Lodeiro paid dividends, as he skipped past a weak Gerrard challenge and found Edinson Cavani in space out wide. El Matador proceeded to deliver an inch-perfect cross into the box, before Luis Suárez headed the ball back across Joe Hart and into the net for 1-0. Fernando Muslera stood up to a stern test from Daniel Sturridge a couple of minutes later, and Uruguay held their lead to the break.

Uruguay would have been forgiven for coming out for the second half looking to defend their advantage, but the opposite was true. They smelled blood, and went close to doubling their lead on a corner before Cavani fired wide in a one-on-one with Hart. England weathered the storm and Rooney wriggled into the box moments later, though Muslera got down to make an excellent save. 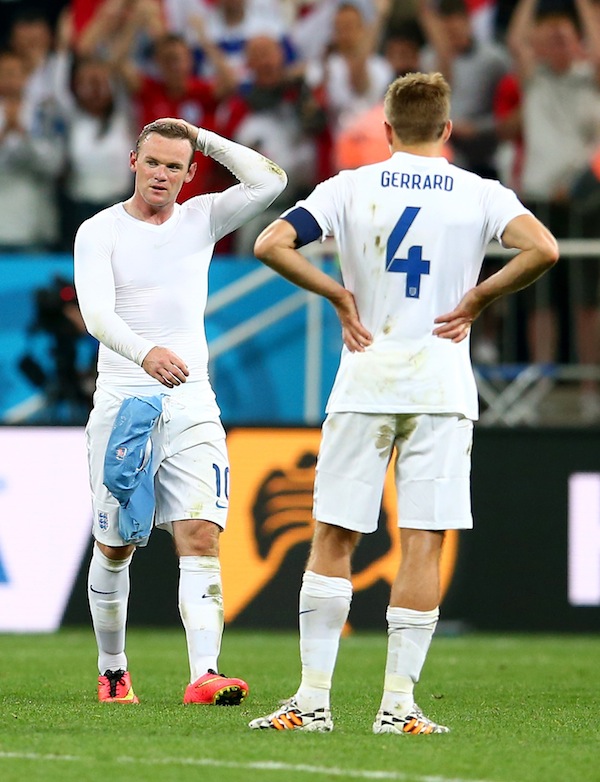 Gradually Uruguay sunk further and further towards their own goal in a bid to protect their lead, while England tried to break through their strong defensive ranks. Roy Hodgson's side were fast running out of time to find an equaliser, but with just over 10 minutes remaining, they did. Sturridge squeezed Glen Johnson into space down the right, with the fullback sliding the ball across to give Rooney a tap-in at the far post.

Unsurprisingly a Uruguay barrage followed, and, with just five minutes of normal time remaining, they had a crucial lead again. A mix-up in the England ranks saw the ball flick back off the head of Gerrard and into the no-man's land behind the Three Lions' defence. His domestic teammate Suárez was on hand to sweep the ball up and smash it past Hart for 2-1. This time, England had no reply.