This is not the Bosnia you were looking for

A nation still carrying a heavy heart has a symbol of reconciliation at their doorstep, but the want and desire to answer still has a ways to go.

On June 17, I stepped off a bus into the town of Trebinje, located in the southernmost tip of Bosnia and Herzegovina. The national team was due to kick off their first-ever World Cup match in less than ten hours, and I'd need to find a place to sleep as well as scout out the best location to watch the game.

Wandering through this town of about 25,000 people, I was struck by just how empty it was. Granted, it was a Sunday, so people may have been tucked up for a long lunch or an afternoon nap. Then the silence was split by horns honking in the distance. As the line of cars approached, I thought maybe I'd found what I was looking for. Instead, the parade of vehicles made their way to slowly to the church. Just a wedding.

Last year, I was in Sarajevo during their World Cup qualifier against Latvia. By mid-morning, the streets of Old Town were already decked out in blue and yellow, and every other person seemed to be wearing a Bosnia kit, a scarf, or a flag draped around their shoulders.

In Trebinje, the silence spoke volumes. The only flags I saw were vertical stripes of blue, red and white. Was this Bosnia?

I did not arrive in this town purely by chance. Two years ago, knowing nothing about Bosnia beyond what I'd seen as a child during nightly television reports on the war, I found myself in conversation with two Bosnian Serbs. Wanting to find a common ground, I told them about my visits to the Bosnian soccer bar back in Portland, Oregon. I talked about watching the Euro 2012 playoff match against Portugal there, and asked what they thought Bosnia's chances at qualifying for the World Cup might be. They exchanged a glance, then told me they both support Serbia.

The story of a unified Bosnia is a beautiful one, but it is best set inside a heartwarming motion picture. As always, Bosnia itself proves much more complex. And nowhere near as heartwarming.

And that was the start of my journey down the rabbit hole into the convoluted world that is Bosnia today.

I chose Trebinje because I wanted to see how opinions had changed since Bosnia and Herzegovina qualified for the World Cup. Over the past six months, I'd read a string of articles outlining how the national team had unified the country. Politics in Bosnia pit each of the three constituent peoples — Bosniaks, Croats and Serbs — against one another, and the scars of the war had yet to heal. But this team was succeeding in a way that the politicians could only dream about.

Such articles only serve to whitewash the story. For the majority of people who live outside the Balkans, Bosnia has been forgotten until now. Now the story of Bosnia serves as a perfect narrative: a country in which a bloody war ended less than twenty years ago had qualified for their first World Cup as an independent state. And the national team featured Serbs, Croats and Bosniaks who exemplified a unity rarely seen inside the country. Surely this was a triumph for Bosnia, a step to creating a true nation, rather than a set of peoples living inside an uneasy truth.

The story of a unified Bosnia is a beautiful one, but it is best set inside a heartwarming motion picture. As always, Bosnia itself proves much more complex. And nowhere near as heartwarming.

When sitting in a cafe in Trebinje's Old Town, my friend and I struck up a conversation with a group sitting next to us. A woman and two men (who looked to be in their early thirties) filled us in on how they felt about the Bosnian national team. They were proud of Bosnia and wanted them to beat Argentina later that night, one of the men revealed. However, they'd never display that pride publicly. In fact, they'd rather it was Serbia in the World Cup.

Our host Milorad drove us through the center of town on his way to his house in the hills. On the way, he gestured at the main streets, pointing out how no one would ever guess the country was about to play its first World Cup match later that evening. People were glad Bosnia had made it, he said, but they weren't actively cheering the team.

The people in Trebinje don't feel as though the Bosnia national team represents them.

Why not? we asked. Well, the people in Trebinje don't feel as though the Bosnia national team represents them. After all, there are no players from Republika Srpska in the squad. That makes it difficult to get behind the team.

It's true. For all that's been written about the team representing a unified Bosnia, the composition of the squad does not reflect the population of the country. The most recent data estimates that the country is 48 percent Bosniak, 37 percent Serb and 14 percent Croat. For the national team, there are two Bosnian Serbs (Ognjen Vranješ and Zvjezdan Misimović) and one Croat (Toni Šunjić). That leaves the 23-man side at 87 percent Bosniak, 8.7 percent Serb and 4.3 percent Croat.

Asmir Avdukić, the only member of the team currently playing for a Bosnian club, is at Borac Banja Luka but is from Breza, a town with a majority Bosniak population. Republika Srpska is represented by one player, Vranješ, but as he rarely starts it's possible that Bosnian Serbs simply overlook him. Misimović is one of the team's stars, but as his parents emigrated to Germany during the 1960s and he himself was born in Munich. He's not a player Republika Srpska can call their own.

In October, Sepp Blatter spoke in Sarajevo, calling the national team "a symbol of reconciliation and union for the whole country ... once again demonstrating the powerful role of football in society." Once again, Blatter's words are pretty enough, but with little truth behind them. As Milorad said, the wounds from the war are still too fresh.

That Bosnia is not the national team of Trebinje became painfully evident as we edged closer to a midnight kickoff. A hotel in the town's main square had set up a projector, but the dazzling lights of France vs. Honduras were flickering over a sea of empty tables. By halftime, the show had been shut down.

Cafe Amico looked more promising, but to be sure, we asked the waiter if they'd be showing Argentina vs. Bosnia. He shrugged and, with an embarrassed smile, said they would if people were interested. Everything looked promising as at least five tables were watching the second match of the day and, after the final whistle, a large group of men dropped in, taking up multiple tables and ordering drinks. We felt it was safe to settle in.

But the group finished their drinks, and the only table left contained the manager and his buddy. We were politely turfed out, leaving us ten minutes to get back to the hotel before kickoff. Racing through the empty streets, the lack of interest was painfully evident. Most cafes were dark, and in ones where the televisions hummed, no one was there to watch.

The atmosphere in Sarajevo couldn't have been more different. Branka Damjanovic, a U.S.-based researcher, had a flight to catch at 6 a.m. on Monday, but couldn't resist going out to watch the midnight match. She described the atmosphere in the country's capital as "electric", with an "incredible energy." There were flags everywhere, Damjanovic said, wrapped around cars, on clotheslines, draped over people. Blue horns with the country's flag had been passed out, and everyone stood for the national anthem. 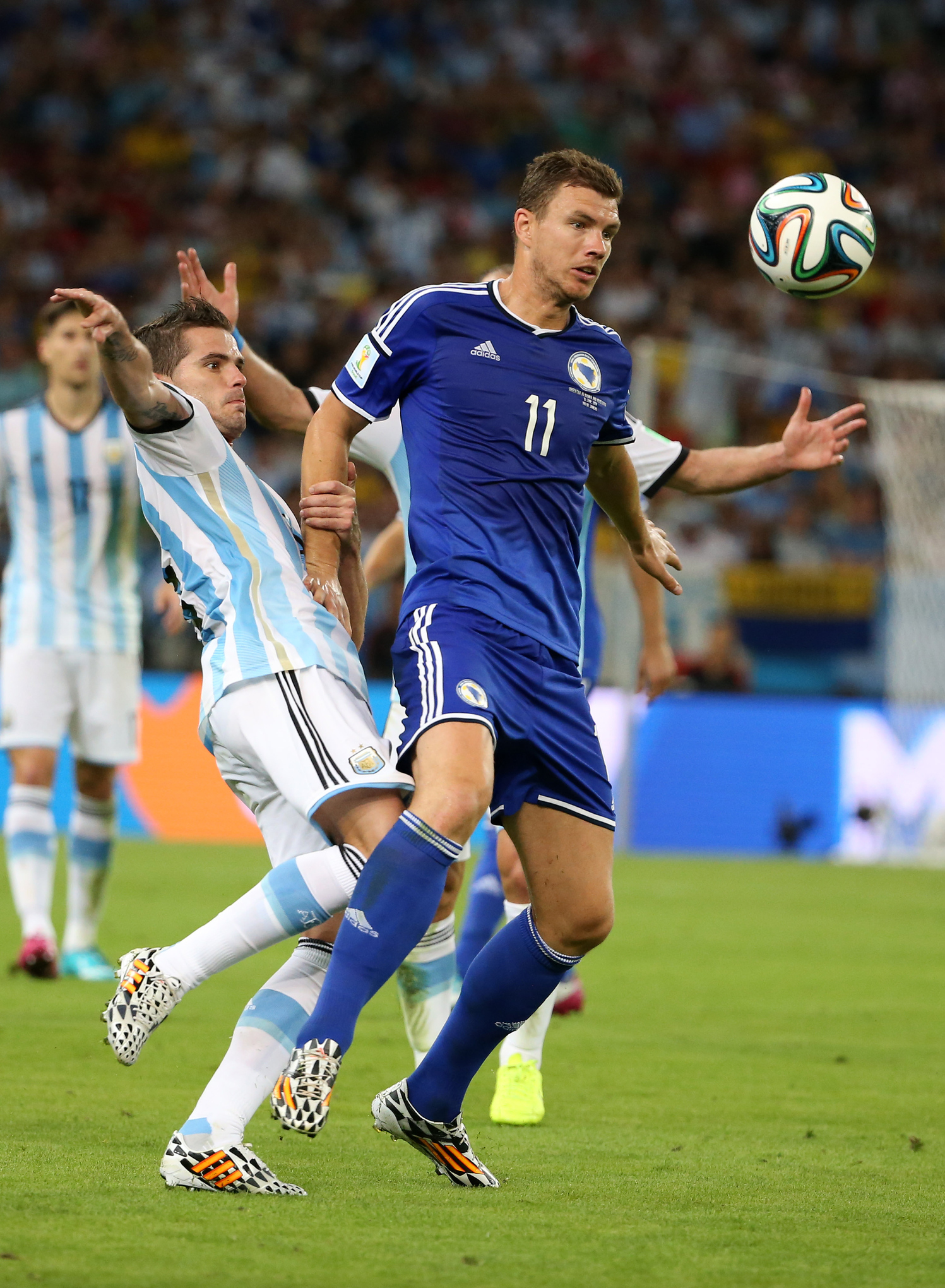 In Sarajevo, the silence fell after Sead Kolašinac turned the ball into his own net. In Trebinje, it had been there all along. We threw open the windows, hoping to hear sounds of others' watching echoing through the hills. Instead, when Vedad Ibišević reduced Argentina's lead, we could only hear the barking of stray dogs. In Sarajevo, though, the city erupted and despite the eventual loss, the streets were filled with honking cars as flags waved from the windows.

The Bosnia national team has plenty to be proud of. Many of its players were forced to relocate at a young age, the horrors of war sending their parents searching for safety. Still, they chose to represent this country and have formed themselves into a team capable of standing up to Argentina. Their finishing could certainly be improved, but their ability to shut down Lionel Messi for much of the match and to keep the rest of the lethal Argentine offense from scoring demonstrates that they're in Brazil as a football team, not simply to provide an uplifting story about redemption.

To wrap up Bosnia's story in a myth of unity not only implicitly relegates its footballing accomplishments to a mere footnote, but also papers over the cracks that most need to be seen. Divisions inside Bosnia make the country near unworkable. The Dayton Agreement, signed in 1995, provided the country with a constitution drafted by international actors. The constitution requires power-sharing amongst the three groups, with the hope that it would force the ethnicities to bridge their divisions. Instead, it has served to further divide the population and created a fractured state.

Rather than working together, Bosnia's politicians feed off the rules requiring a two-thirds majority before laws can be passed. They appeal to their constituents with tales of how the other ethnicities are striving to make life more difficult. Meanwhile Bosnia's economy is barely viable, with a 47 percent unemployment rate and a huge reliance on foreign aid.

Bosnia's first goal at the World Cup was against themselves. How appropriate for a country that turned against itself 25 years ago, and still cannot find a way to come together once more.