Japan fans were much more popular than Greece fans in Natal on Thursday. It's not difficult to figure out why.

Share All sharing options for: How to make the World Cup love you in 8 simple steps

NATAL, Brazil -- At every World Cup match, the stadium is filled to the brim with neutral fans. Be they local Brazilians or traveling fans of teams not playing, there are thousands of people in each stadium looking for an excuse to cheer for one team over the other.

On Thursday, Japan put on a clinic on how to woo the neutrals. It was a masterpiece.

Here’s how they did it:

1) Give out free things. Japan fans gave away headbands with the rising sun and Japanese letters. Nobody had any idea what the letters meant — we asked one fan who also spoke English, and they all said "Japan," "Fighting Spirit," and "Must Win" — but it didn’t matter. 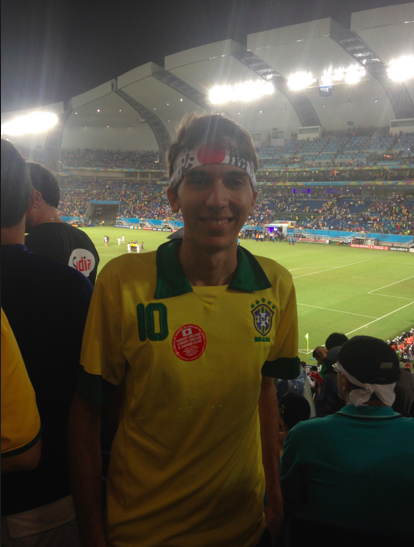 Americans, Australians, Canadians and Brazilians all donned the headbands and long before the match even started, they were all chanting "Nippon!" Every once in a while, someone would yell "Bonsai!" and the entire crowd would cheer. The match was 60 minutes away and Japan had already won over the crowd.

Exactly: it was awesome and you want to do it again. Now you have to root for Japan.

Also helpful, not flipping off all the locals. The Greeks were excellent at that.

4) Buy beers for everyone. If you were in line next to a Japan fan, he would buy you a beer. If you finished your beer, he would go buy you another one. Japan bought the crowd’s love, and the crowd appreciated it.

5) Don’t waste time all match. Just in case the entire crowd didn’t already want Japan to win, Greece dove and wasted time all match. Because their fans flipping off the locals wasn't enough.

6) Have a player at Manchester United. Maybe the biggest cheers of the match came when Shinji Kagawa came into the match. You don’t need to score to be popular in Brazil, just play for Man United.

7) Invent Pokemon. Every Japan fan who walked around with a Pikachu doll tied to something — and there were a lot of them — was immediately the most popular person around. Everyone talked to them and wanted pictures with them. One man even yelled "PIKA PIKA" at them, which was as creepy as it was hilarious.

8) Seriously, the beer. I dare you not to root for someone who buys you beer just for being nearby.