Argentina will have to break through a wall of Iranian defenders if they're to win their second group game.

Argentina's World Cup opener didn't quite go as smoothly as expected, with the Albiceleste unconvincing in their 2-1 victory over Bosnia and Herzegovina. A tactical switch from coach Alejandro Sabella failed to pay dividends, and in the end, only a third-minute own goal from Sead Kolašinac and some Lionel Messi magic separated the two sides. If they're to live up to expectations at this tournament, they'll need to improve.

In contrast, Iran's first game completely followed the script. Team Melli managed to frustrate Nigeria in a dour 0-0 draw, with Carlos Queiroz's side packing men behind the ball at the expense of any real attacking threat of their own. They'll likely do the same against Argentina in their second group game, though Sabella's side will no doubt prove a sterner opponent than the Super Eagles.

Narrow victory against Bosnia and Herzegovina

Argentina gained a victory over Bosnia and Herzegovina in their opponents' first-ever World Cup game, but it was far from a convincing win.

Narrow victory against Bosnia and Herzegovina

It's looking likely that Argentina boss Alejandro Sabella will continue with the 4-3-3 that he used in the second half of their game with Bosnia. The back three he started out with proved ineffective, as Argentina's forwards struggled to create a consistent supply to their key dangerman, Lionel Messi. However, once things were switched around they looked much better, meaning the Albiceleste will probably start where they left off. That means Hugo Campagnaro will likely be dropped to make way for striker Gonzalo Higuaín.

Meanwhile, Iran probably won't make any changes after they successfully earned a point against Nigeria. 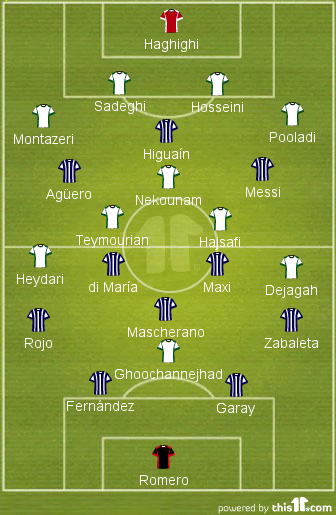 Argentina's narrow attack vs. Iran's compact defence - Argentina will certainly dominate possession in this match, and will hope to do much better with the ball than they did against Bosnia. Their key will be making smart combinations and runs in behind Team Melli's deep, static defence, as their wide forwards Messi and Sergio Agüero are more comfortable drifting inside than hitting the byline and whipping an aerial cross into the area. If they don't link well, they could struggle against Iran's compact unit.

The two most defensive teams at the World Cup astonishingly failed to produce a thriller for the ages as Nigeria and Iran played out a goalless stalemate, the first draw of the tournament.

The former is a pretty good pacey counter-attacking threat, capable of cutting inside and shooting or delivering a dangerous cross into the box. He started on the left in Iran's opening game but was quiet, so it'd make sense for Queiroz to switch him over to his more natural right side, especially against the Albiceleste's weaker fullback Marcos Rojo. If he gets some space to charge at him, he could prove dangerous.

Ghoochannejhad, meanwhile, is a mobile centre-forward who'll regularly drift to the channels to try to hold up the ball and relieve the defensive pressure on his teammates. He's also a pretty good aerial threat, and will be the man in the box attacking Dejagah's crosses. He won't see much time on the ball at all, but he'll need to make it count if Iran are to take anything from the game.

Carlos Queiroz and Iran should be commended for their performance against Nigeria, which was disciplined and deserving of the point. However, Argentina have the fiercest attack in world football, and they should have too much quality to be stifled. 3-0 Argentina.