With both Nigeria and Bosnia-Herzegovina failing to win their opening World Cup games, their meeting on Friday is a very important affair.

Nigeria has a solitary point after the first slate of Group F games, while Bosnia and Herzegovina are sat on a big fat zero thanks to an opening defeat to Argentina. However, it's paradoxically the Dragons who are probably more content with their position, knowing they still have this clash with the Super Eagles and minnows Iran still to play. For them, progression into the knockout stages is still a very realistic prospect.

Nigeria, meanwhile, could well head into the final matchday having to pick up points against World Cup contenders Argentina to progress into the knockout stages. That would be the case if Bosnia earns at least one point in this match and then have enough left to beat a stubborn Iran. In short, this game is a must-not-lose for Bosnia, and in all likelihood a must-win for Nigeria.

Argentina gained a victory over Bosnia and Herzegovina in their opponents' first-ever World Cup game, but it was far from a convincing win.

Nigeria were very disappointing in their opening draw with Iran. Coach Stephen Keshi may, therefore, opt to make changes to his starting lineup, with Shola Ameobi and Peter Odemwingie alternative attacking options. They'll hopefully have defender Godfrey Oboabona fit to play after he picked up an ankle injury in the opening game.

Bosnia have been boosted by the news that their captain Emir Spahić is set to quickly bounce back from a knee problem. Otherwise coach Safet Sušić should have a full complement of players to choose from. He may well start an unchanged lineup from the one that lost 2-1 to Argentina in their opening game, though veteran forward Vedad Ibišević could come in alongside Edin Džeko up top after scoring their consolation from the bench. 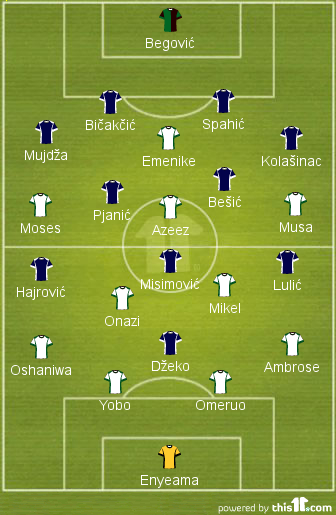 Nigeria's attackers vs. Muhamed Bešić - One of Bosnia's star performers in their defeat to Argentina was defensive midfielder Muhamed Bešić, who was effectively the only true defensive anchor tasked with shielding the Dragons' centre-backs. With Nigeria often playing extremely narrow when they venture forward -- Victor Moses and Ahmed Musa both like to drift inside -- the defender-turned-midfielder Bešić will have to be just as impressive once again.

The two most defensive teams at the World Cup astonishingly failed to produce a thriller for the ages as Nigeria and Iran played out a goalless stalemate, the first draw of the tournament.

Nigeria's defence vs. Miralem Pjanić and Edin Džeko - Bosnia's creative midfielder Miralem Pjanić and their powerful centre-forward Edin Džeko will surely stand out as the two most talented names on this game's teamsheet. With Pjanić having impressed in an excellent season at AS Roma, Nigeria will have to work hard to keep him quiet. He's not quite as comfortable in a midfield pivot as he would be with the freedom to break forward in a 4-3-3, though his incisive passing will still be a big threat. If he can find the lethal Džeko in space in the box, the ball will probably end up in the back of the net.

This game is very difficult to predict, not least given how the importance of the occasion could lead to some cagey football. However, if these sides' opening group games are anything to go by, it's the Dragons who should just about have the edge. 2-1 Bosnia and Herzegovina.