Share All sharing options for: France show just how good they are with 5-2 mauling of Switzerland

France threw cold water on Switzerland's hopes of doing much damage in the knockout rounds with the most comprehensive demolition of recent World Cup history. It's rare that a three-goal group stage win understates the superiority of one side over another, but Les Bleus could easily have won by a significantly higher margin, and had goal differential been of any importance whatsoever to Didier Deschamps right now we could have seen nine or ten goals scored by the French. 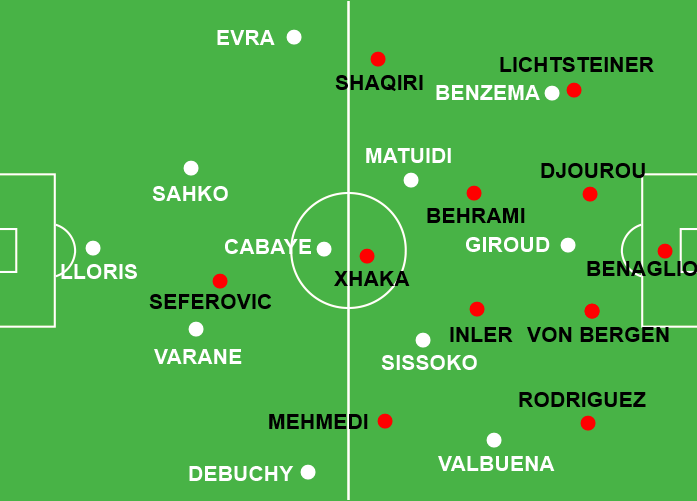 Both Switzerland and France made changes in response to the events of their opening game wins. Swiss coach Ottmar Hitzfeld rewarding Admir Mehmedi and Haris Seferović, heroes of the 2-1 win against Ecuador, with starting berths at the expense of Valentin Stocker and Josip Drmić. Deschamps, meanwhile, opted to give Olivier Giroud and Moussa Sissoko a run out, the latter perhaps in response to Paul Pogba's petulance in the opening half of the win against Honduras.

This obviously was not France's strongest lineup -- Karim Benzema is not a natural winger and although Sissoko has several merits, he's not Paul Pogba -- but with the group stage games coming quickly, it makes some sense to rotate where you can. Obviously, Deschamps lineup decisions worked to perfection here. The same cannot be said for Hitzfeld's.

The fullbacks are irrelevant

The standard tactical look at the Swiss side will point to the fullbacks, Ricardo Rodríguez and Stephan Lichtsteiner, as both a major strength and a major weakness. Both play as high up the pitch as possible, contributing heavily to the attack, and while that gives Switzerland significant extra firepower going forwards it also opens up holes on the flank for the opposition to counter into.

It's possible that Benzema's positioning -- high up on the left side, with an eye towards cutting in -- was a way of pinning back the right-sided threat of Lichtsteiner, but in truth Switzerland's fullback play was utterly irrelevant. By the time either of them was pushing forward in any meaningful way, Les Bleus were already 2-0 up and the game had been lost.

Switzerland had no control of the ball outside of their defensive third for the first half hour of the match. That's utterly stunning, and it gets worse when you realise that they were refusing to cycle the ball for long around the back either. The Swiss were insistent on driving forward to spark the attack, and they were getting mauled as soon as they got into range of France's midfielders.

Deschamps employed a heavy early press, designed specifically to attack the Swiss pivot of Gökhan Inler and Valon Behrami. Both are decent enough players -- Behrami was the impetus behind the late goal that beat Ecuador -- but here they were utterly out of their depth. Sissoko hammered Inler whenever he received the ball, while the imposing figure of Blaise Matuidi seemed to enjoy turning Behrami inside out at will. Behind them, Yohan Cabaye mopped up.

Although applying a press is useful for winning back the ball via tackling, its real value comes in forcing opponents to play too quickly. It's a disruptive technique rather than a purely defensive one, and here it worked to perfection. Switzerland were never able to string long passing chains together without making a mistake, and they tended to cough up possession so quickly that it took them almost half an hour to get the ball into France's half with anything that looked even vaguely like the 4-2-3-1 they were meaning to attack with.

The press isn't the only factor in France's midfield dominance, of course. They were helped by some very sloppy play, especially from Behrami, whose contribution to the second goal was magnificent. That goal, in fact, pretty well summarises everything that happened in the first half -- immediately after conceding from a corner, Switzerland need to hold the ball, so they manage all of three passes before Behrami, under minimal pressure from Benzema, tries to get the ball to Johan Djourou, leaves it massively underhit, and a wave of white shirts pick up possession, race past the defence and score.

By the second half, France were up 3-0, and the only significant scoring chance Switzerland had created came when Mathieu Valbuena accidentally played a through ball through his own midfield when attempting to make a tackle. The game was long-since over, and the only question remaining was how many France would score. They ended up with five before the 80th minute (and but for Diego Benaglio, would have had more), at which point they decided to turn off for a little while. Don't let Switzerland's too late consolation goals fool you into thinking this was anything less than total and utter annihilation, the most complete performance so far at the tournament.

This is the sort of thing that happens when a powerful, skilled midfield is on form against lesser opponents. It was astounding, and quite frightening if your side is set up to play against France anytime soon. Have fun, Ecuador!