Belgium will have to improve on their opening showing against Algeria if they're to break a stubborn Russia down.

Belgium headed into the World Cup with the weight of great expectation on their shoulders. They boast an outstanding wealth of young talent, and thus were tipped by many to make a deep run into this tournament. Their opening scare against Algeria, therefore, raised a few eyebrows. They did eventually manage to come from behind to beat Les Fennecs 2-1, though the performance was far from convincing. Belgium coach Marc Wilmots will be looking for an improvement from Les Diables Rouges in their second game against Russia (12 p.m. ET, ABC).

Russia opened their World Cup campaign with a 1-1 draw against South Korea, in what was probably the cagiest game we've seen in Brazil so far. Both sides looked reluctant to seize the initiative and attack, leading to a rather standoffish contest that relied on a couple of goalkeeping errors to produce goals. Expect Russia to be equally defensive against Belgium, who are the standout team in this group.

Belgium came from behind to beat a stubborn Algeria 2-1 in their World Cup opener.

Wilmots is waiting on the fitness of his captain Vincent Kompany, who is struggling with a groin strain ahead of this match. If he is ruled out, Thomas Vermaelen would likely come into the centre of defence alongside Daniel Van Buyten. Dries Mertens may well be given the nod on the right of the Red Devils' attacking midfield, after replacing Nacer Chadli to good effect against Algeria.

The big selection decision for Fabio Capello seems to be whether to continue putting faith in goalkeeper Igor Akinfeev after he calamitously threw the ball into his own goal against South Korea. With Russia's two backup keeper having only four caps between them, Akinfeev will likely be given the chance to atone for his error. Attacking midfielder Alan Dzagoev came on as a substitute in Russia's opener and had an impact, though may well have to settle for a place on the bench once again. 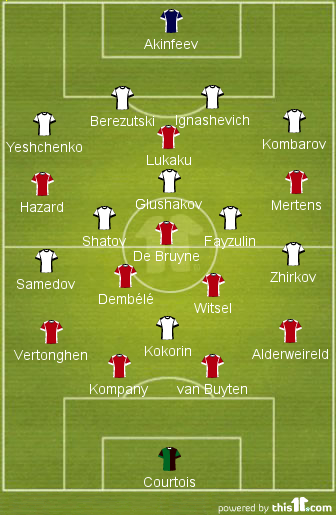 Belgium's attacking vs. Russia's deep defence - Belgium really struggled against Algeria's deep defending in their opening group game, and will likely come up against a Russia team trying to play in a similarly negative fashion in Russia. Fabio Capello's sides are famously defensive, and Russia will look to stifle the Red Devils first and foremost, knowing that a point would be a pretty good result. If Belgium play in a similarly static fashion, they could again struggle to break their opponents down.

Goalkeeper errors the story in draw

It was not a good day for the goalkeepers. Errors from both teams' net minders led to late goals.

Goalkeeper errors the story in draw

Eden Hazard vs. Andrey Yeshchenko - One man always capable of unlocking a defence, however tight, is Eden Hazard. He was disappointingly quiet out in his favourite position on the left hand side of Belgium's attack against Algeria, though the Red Devils will hope he's back on top form against Russia. If he is, he'll cause their right-back Andrey Yeschenko great problems with his excellent technical ability and vision, and will look to take advantage of any space he'll find drifting into the centre of the field.

Belgium are far superior than Russia, though if there's one thing coach Capello can do, it's creating a well-organised defensive unit. 0-0.